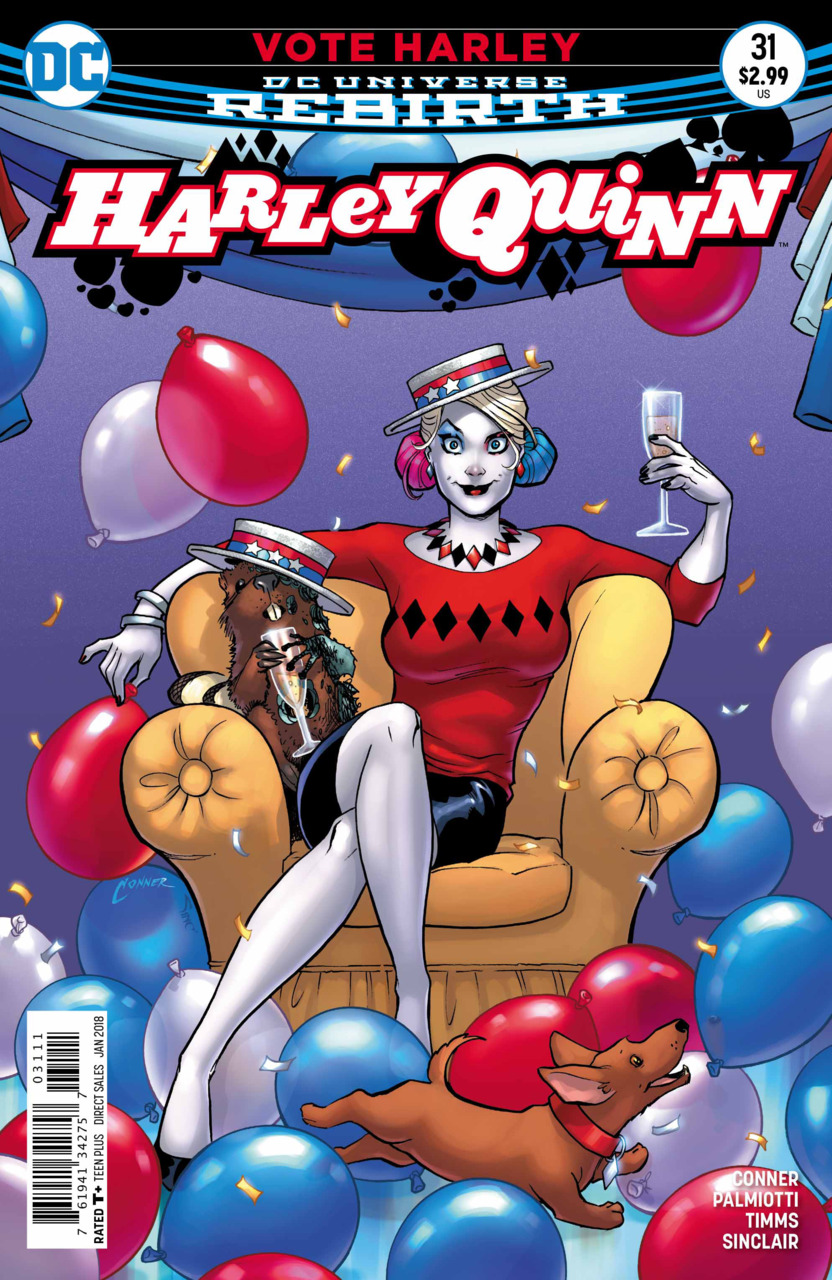 Overview: With the life of Mason at stake, Harley and Harley Sinn travel to the Mayor’s hideout in an attempt to rescue Mason.

Synopsis (spoilers ahead): Following the revelation of last issue, the Mayor is holding Harley’s man, Mason, hostage, and it sets Harley off! Despite the protestations of Ivy, Harley rushes back on the debate stage to confront the Mayor, accusing him of kidnapping Mason and threatening him physically. Quickly the Mayor’s  armed force arrest Harley who surrenders without a fight. Taken back to the cells, Chief of Police Spoonsdale comes to visit her.

Meanwhile, Tony and Red Tool break into Madison’s apartment, looking for clues of Mason’s location. Red Tool dynamites a safe which seems to hold a clue in a list of emergency numbers. On Fire Island in the meantime, Madison comes to where Mason is being held – bound, gagged and bleeding…things are looking grim.

Out of jail and back at her apartment, Harley is getting stressed as Madam Macabre assures Harley they will kill her son. Harley in conversation with her pet (stuffed) talking beaver gets the bright idea to shadow the Mayor with Spoonsdale’s men, as the emergency number list shows multiple numbers to the same location – that of the Mayor’s ex-wife’s mansion on Fire Island he kept in a divorce settlement. Harley has her target and Spoonsdale assures her his police plaza will look the other way if she has to get her hands bloody.

Ivy stays behind as Harley and Harley Sinn take the road-trip to Fire Island. They have a moment of reflection and intimacy where Harley offers some much-needed life advice to Harley Sinn. Arriving at the mansion, the Harleys try to strategize for something covert but are quickly discovered by the Mayor’s men who have been tracking them. The men waste no time in putting a bullet through Harley Sinn’s kneecap, and it seems like murder is in the air.

Analysis: This arc featuring the mayoral race is peaking and fast approaching what looks to be a bloody and dangerous conclusion. There is much to like in this issue – up front is Harley’s very real concern for Mason. The stakes are high in this issue, Harley isn’t so much the clown as she is just a very worried girlfriend. Ivy wants to help, but this isn’t her fight. You get the sense that perhaps in taking Harley Sinn into a possible no-win situation, where the spilling of blood is inevitable, Harley has picked one of the most dangerous and deranged members of her crew. Harley always puts herself in the front line – but she didn’t want Ivy or Madam Macabre to come with her. Perhaps she senses a bloody end.

The art in the issue is in keeping with the tone of this series – fantastic coloring mixed with John Timm’s always elegant impression of Harley and her friends lends some power to some splash pages which heighten the emotional quotient fro the reader. There’s also a quiet, almost unexpected power in a quiet scene as Harley and Harley Sinn travel to Fire Island. It brings out the therapist in Harley as she talks to Harley Sinn, explaining that people like them live in a drama triangle, based on fear and looking back. Its not what we would expect from these two, who have been antagonists to this point with almost no redemptive cycle for Harley Sinn – she fell in with the rest of the gang mostly through convenience not virtue. This little scene is a reminder of how skillful and how quick Conner and Palmiotti are as writers on this title. They zig where others zag. Combining the little touches with the rising moment of a violent conclusion makes this one of the picks of the week.

Final Thoughts: As this arc lurches towards its conclusion, unexpected twists and dramatic stakes make sure that Harley Quinn is one of the best reads on the shelf every month! Highly recommended!