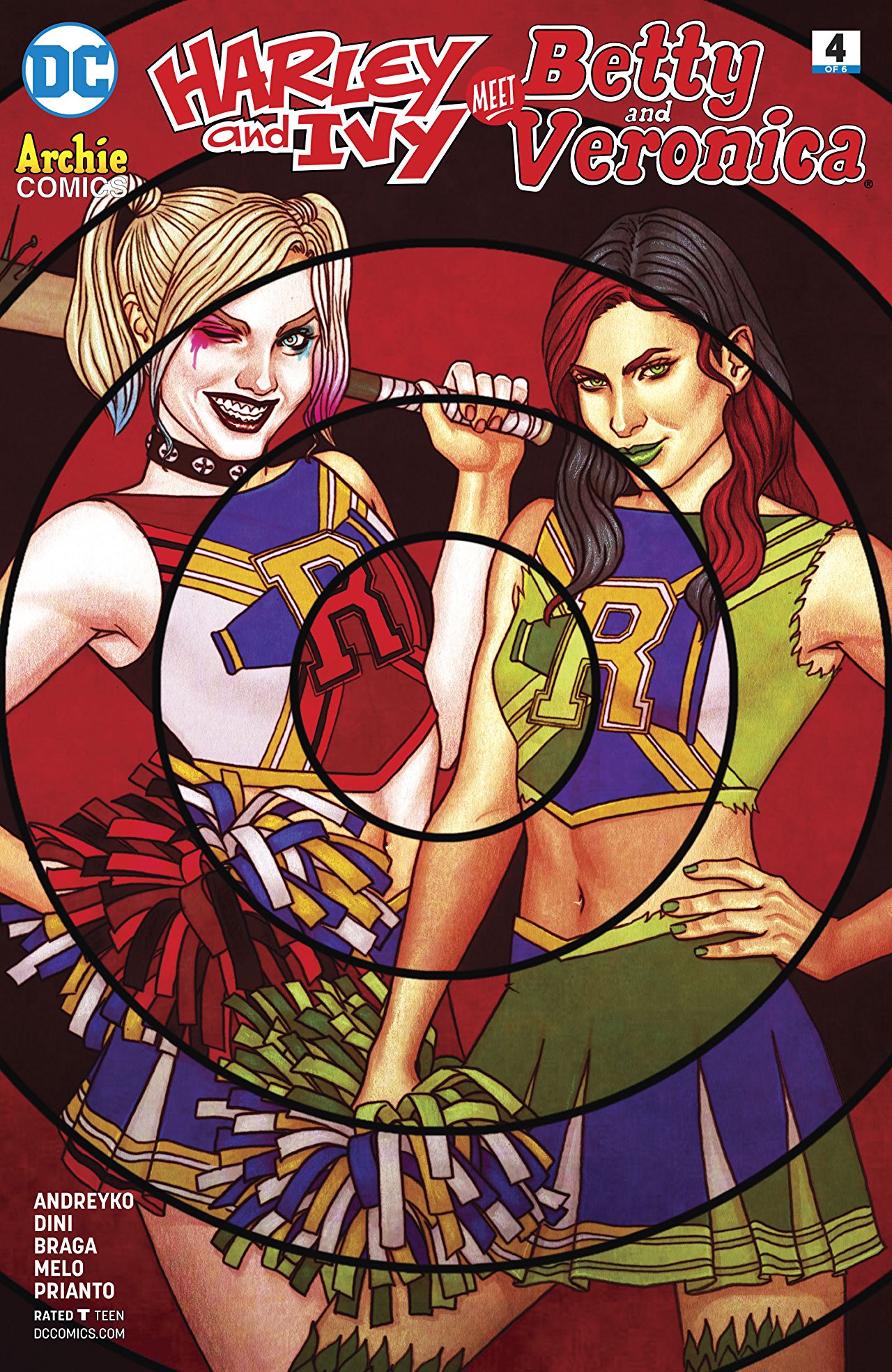 Overview: Harley and Ivy’s body swap with Betty and Veronica continues to cause havoc in both Gotham and Riverdale.

Synopsis (spoilers ahead): Betty and Veronica have swapped bodies with Harley and Ivy thanks to Zatanna. The two Riverdale teens are facing off against Peach-head Henry and other members of Mr. Lamprey’s gang. Joker has shown up and makes sure Lamprey’s men know who is the baddest clown in Gotham. B&V say that Joker is really Reggie in the costume from the party. Lampry’s guys apologize to the Clown Prince of Crime and head back to their hideout.

Mr. Lamprey tells his gang that they weren’t really accosted by Joker, he had been returned to Arkham by Batman. He tells the group to go back and get Harley and Ivy.

Betty and Veronica walk with Joker and take some time trying out their new bodies and powers. Veronica has inherited Ivy’s plant powers which takes some getting used to. Veronica kisses Joker and makes him fall gaga for her.

Back in the homey confines of Riverdale, Harley and Ivy, in the bodies of Betty and Veronica, are chatting with Archie when the Cheryl and Jason Blossom show up. Cheryl wants revenge for being turned away from the Lodge Gala and Ivy chokes out an apology. Jason suggests they go to the Drive-In to see a haunted tree movie. The three accept the offer.

Cheryl and Jason have no intention of making up with Betty, Veronica, and Archie. They are planning to play a trick on the trio. Cheryl get’s the family gardener to collect colorful leaves for her nefarious plot.

Harley and Ivy pay a visit to the construction site at the Sweetwater Swamp, which is right next to the Drive-In Theater. A security guard recognizes Veronica and asks the two to leave, but Ivy has gotten a good look at the place and is formulating a plan of her own.

That night, at the Drive-In, Veronica, Harley, and Archie are watching the movie. Harley is eating copious amounts of food. Ivy leads her away to go to the construction site. Cheryl is waiting for the pair dressed as a Tree Monster, just like in the movie. As they figure out how to cause the most damage to the site Cheryl pops up to frighten them and soak them in maple syrup. Cheryl has taken a video with her phone and Harley whacks her with a stick and gets it away from her. Ivy points out that the leaves that are on the fake tree are poison ivy and rubs them all over Cheryl’s body in retribution.

Betty and Veronica decide they need to be a little lower key and show up to one of Veronica’s favorite stores to get some clothes. Joker is with them and is a little woozy from the smooching earlier. Veronica tries to pay for clothes with credit cards she has memorized the numbers to. A store manager sees that it isn’t Veronica’s body and has them arrested. Joker runs off.

Betty decides to beat up the store employees, guards and assorted SWAT team members as the two makes their escape. They steal a Taco truck and take the cops on a chase. The two are excited, but realize they want their bodies back.

Harley and Ivy are in a hotel room and Ivy bemoans the fact that her Veronica-body doesn’t have the anti-plant-toxin resistance. She is itching like crazy from the poison ivy. The pair realize that they want their bodies back too! Until next time.

Analysis: Writers Paul Dini and Marc Andreyko have created the outline of a story that has a lot to be said for it, though has some glaring weaknesses. The basic premise of the body swap between the two pairs of ladies works out well. Both fish-out-of-water stories are entertaining. But there are plot questions and incongruities that are troubling. First, is that the Joker in Gotham or is it Reggie? In the last issue seemed it was Joker, but now that we hear Joker is in Arkham; I realize I might have missed a major plot point. Then is Reggie in Arkham? If so, why don’t we see him there, it would be entertaining? Perhaps that is the end of the story, the two pairs of ladies have to spring Riverdale High’s most douchy teen. I don’t know or read the solicits, so I’m guessing.

This confusing bit of the plot makes other, small problems feel like the issues are mounting. Why did Ivy take Cheryl’s phone if it is just going to show Veronica at the construction site? What does Ivy care if V gets in trouble? Why do the Gotham clothing store security guards try to arrest who they think is Harley and Ivy and leave Joker to run off? Why would the Blossom’s gardener send Cheryl poison ivy leaves? Are the labor relations at Casa Blossom really that bad? Also, someone at Riverdale High comments that it is strange that Betty and Veronica (really Harley and Ivy) are getting along so well. The fact that they two aren’t shown in this series as friends has been one of my biggest complaints about this book.

The book is drawn by Laura Braga and Adriana Melo. Colors are by Arif Prianto and letters are by Deron Bennett. The lines are heavy and the characters faces are usually drawn well. It is a good thing that Betty and Veronica have different colored hair otherwise it would be impossible to tell them apart. But overall the story is told well through the art. However, in the scene where Ivy/Veronica puts the poison ivy on Cheryl, she is shown with a face in total shadow with glowing star-like eyes. It is a strange choice. Cheryl is often depicted as dementedly crazy which I’m not sure is in character.

Final Thoughts: This is a comic with a lot of promise that inexplicably stumbles over issues of characterization, plot, and general storytelling. It is a shame, this could be a great book. Overall, I am being generous with my rating just because of how much I like both pairs of characters.