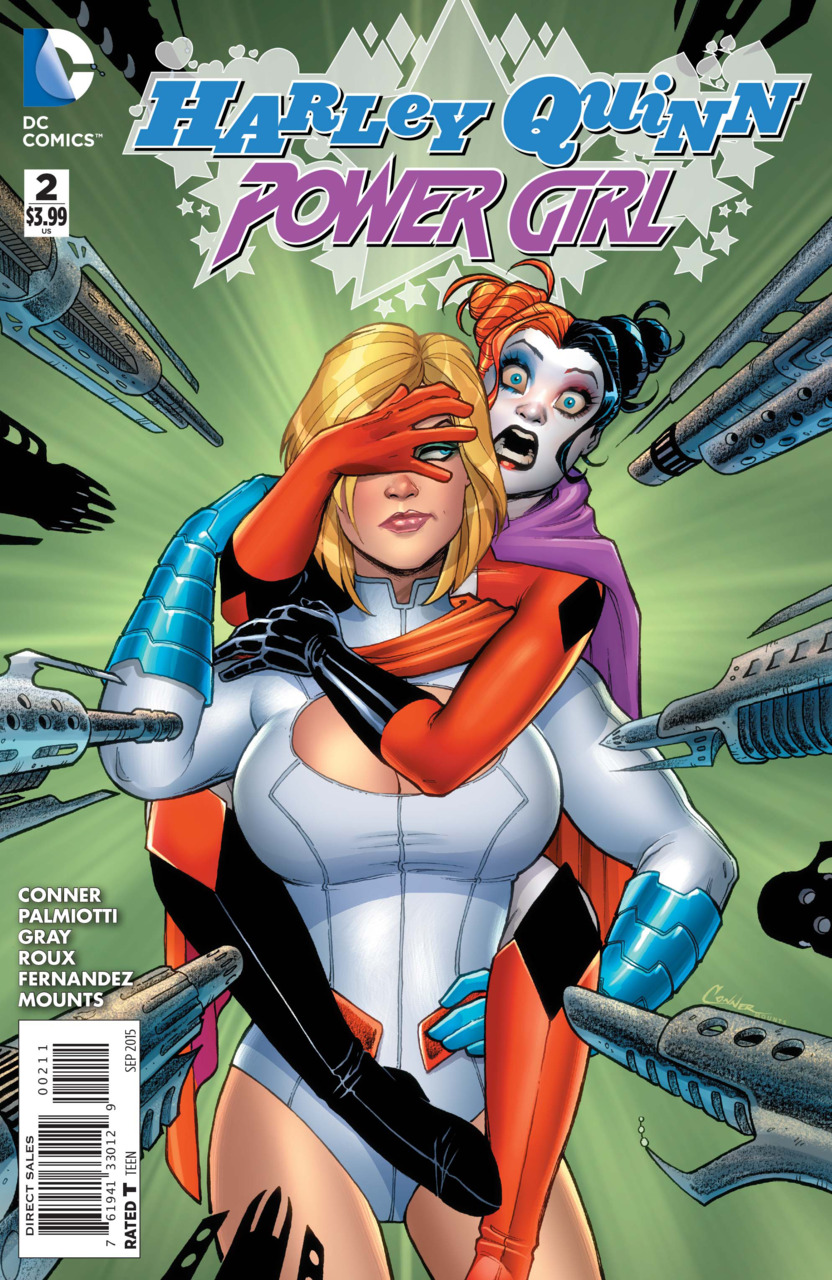 The issue opens on Valeron where our heroes are fighting a gaggle of spaceships that are attacking the planet. Power Girl flies up to meet the incoming fleet to do battle. Harley takes the survivors, including Groovicus Maximus, to safety, if such a thing exists. They try to get to the Love Lair which is just fine with the oversexed Ms. Quinn.

PG does major damage against the attacking space flotilla while Harley meets up with one of Odeox’ robots, Killy-MChappy Bot 2.0 whose job it is to sew up the orifices of any humanoid survivors. This idea doesn’t sit well with Harley or any of the fleeing group. Sadly, the planet is based on peace and love and has no weapons except for some in a museum. So, when the robot decides to attack they make a run for it.

Meanwhile, Power Girl is still doing damage against the fleet but is slammed hard by an object flying down from space.

Harley and the crew are running from the robot when they make their way into Valeron’s sculpture studio. It turns out that the artists here sculpt out of Hard Light which allows them to create unbreakable lightweight and functional art pieces. With the robot hot on their trail Harley takes out the sculptor gloves and goes to work. She creates a giant hammer (surprise, surprise) and goes to work on Killy. She hammers him into a robotic rabbit before she demolishes him with the sculptor gloves.

Back with Power Girl, our gal from Krypton is dazed because of the space blast she just endured and is laying at the bottom of a crater. She is hurt but still alive. The bad guys converge on her but she is saved by a half dozen super heroic looking figures. The six defeat the attackers and revive Power Girl.

They know who PG is and that she (well, her clone) was Vartox’s love. The six, five females and one male, call themselves the XGFs. They are Vartox’s old romantic partners who have joined together to fight crime, or something. The male of the bunch isn’t happy about calling themselves ex ‘girl’ friends considering he is a male.

The group begins to squabble about how many times they slept with Vartox when Harley shows up and thinks the six are fighting Power Girl. Harley goes to work with her hammer on them before PG stops her and explains the situation.

They decide to travel to the Lust Moon to save Vartox and luckily Harley has commandeered a spaceship.

Meanwhile, on the Lust Moon Odeon is torturing Vartox who is trying to withstand the pain. Odeon sends a jolt of power through Vartox. When the waves clear Vartox calls Odeon “Master”. Uh oh.

I enjoyed this issue but not as much as #1. That issue was charming because of the interplay between Harley and PG. Here Harley and Power Girl are split up for most of the book which makes it much less fun. Sure, Harley is up to her typical tricks and dirty jokes which is always a pleasure. And Power Girl is a straight laced fish out of water in this world of weirdos which is also entertaining. So, I’d say that this issue is an enjoyable space romp.

I was a little confused at first when Vartox’s six exes stopped by, I thought I was supposed to know who they were. But they are fun take offs on other DC supers.

The art also serves the story well. It is very colorful and clearly drawn. I love the way the action is shown and the vivid color of the Hard Light sculptures really does seem almost alive.

Even if I wasn’t reviewing this book I’d be sticking with it based on the strength of the first book and the writing team. You can’t go wrong with Conner and Palmiotti and I look forward to the next issue.