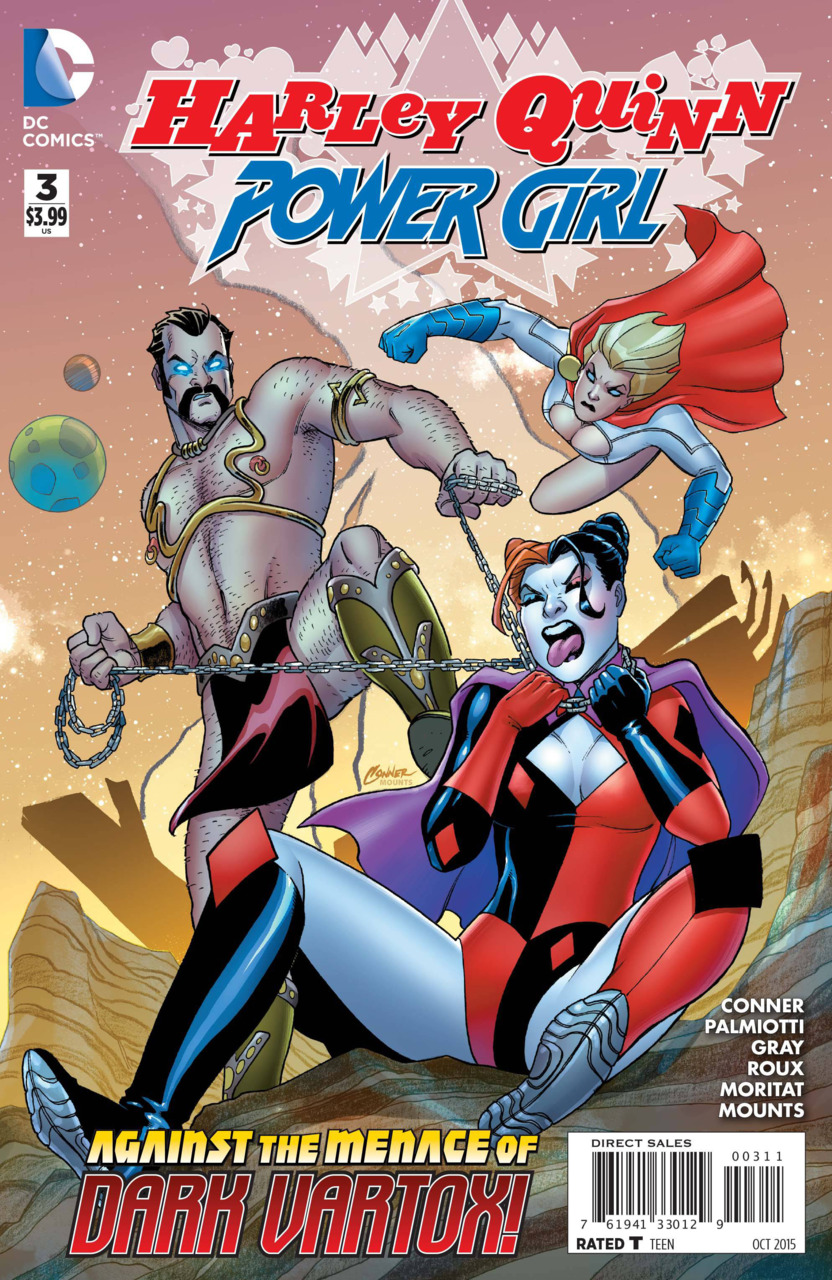 Spoilers below if you dare….

The issue opens with Harley narrating where we are in the story a la Hunter S. Thompson. She, Power Girl and Groovicus Mellow are making their way to the Lustox Moon in a spaceship to rescue Vartox from Oreth Odeox. Oreth has a Teleportation Ring that will get the ladies back to where they teleported in from. Little do they know that in the last issue Odeox has mentally enslaved Vartox.

Their spaceship is attacked by several fighters that are coming out of a space portal. Harley takes the light sculpture hammer she made in issue #2 and gleefully starts smashing the attackers. PeeGee joins her. Luckily the spaceship of Vartox’s ex girlfriends are also en route. The male of the team estrogen, Cherub, takes a shuttle and flies to our heroes ship to help out. He ejects from his shuttle which explodes, apparently destroying the enemy vessels.

They meet back up with Groovicus who landed their ship on the Moon. However, Groovicus has lit up a fat bowl of Starflower Pollen which intoxicates all of the fellow travelers. They embark on a hallucinogenic side journey full of references to Hunter S., The Fifth Element and Constantine. They even run into my old football buddy Raoul Duke in the desert.

Eventually, their ship is hit by an energy beam and they crash onto the moon. Sadly, the EXGF squad seems to have met their demise. From out of the canyon rises a great hairy Vartox, sporting a fancy loincloth and nipple rings. Harley is besotted. PG is disgusted.

Vartox is under Odeox’s spell and is aiming to destroy the team. Harley engages in some ill advised shenanigans but Vartox can’t seem to vaporize her. Power Girl lays a solid punch on him which sends him flying miles away. She goes to find him and they have a fight full of nipple ring yanks and misogyny.

Finally, Vartox hits PG with his eyeball laser beams which seems to smart. To be continued…

Harley Quinn and Power Girl is back, baby! After a lull in issue #2 the ladies return to top form. Harley returns to her adorably zany self with some very clever dialog. Power Girl plays the ‘how is this my partner’ schtick to the fullest.

The writing in this issue is very smart. I’m a Hunter Thompson fan from way back and just loved the references to his work. There are some clever meta gags involving the Disney legal team. Also, HQ and PG are back together, playing off one another and it really works. PG shakes her head at Harley’s antics but somehow Ms. Quinn seems to pull things off.

As far as the art is concerned, I really liked both tones of the issue. The main story is told in a kind of fantasy novel psychedelic tone and the ‘trip’ sequence is told in a dreamy psychedelic style Doesn’t sound like much of a range, but it is and both worked for me.

I know that, as a HQ and a HST fan, I am a ridiculous bulls eye for the target market for this book. However, I really appreciated Conner and Palmiotti’s writing so I am going to give it a stupid good rating. I understand that someone who isn’t in my demographic might not appreciate the gags like I did. But if you are a person with the right kind of eyes willing to follow these crazy ladies on a great shark hunt, I highly recommend you buy the issue and take the ride.