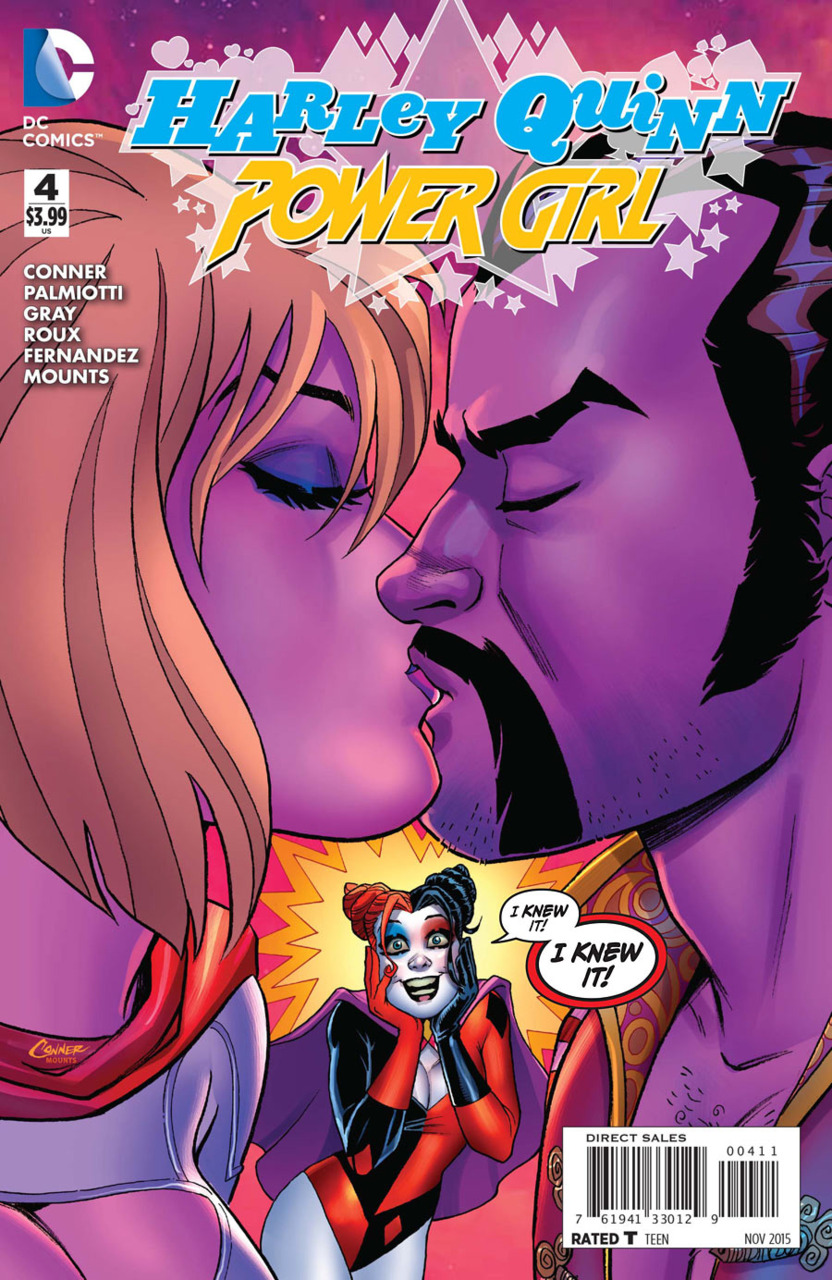 Beyond here be spoilers…

When we last saw our heroines they were doing battle with Dark Vartox. For those keeping score at home, Dark Vartox is like regular Vartox except turned evil by Oreth Odeox who is punishing Vartox for being too sexy for his nipple rings.

Dark Vartox and Power Girl are fighting each other with great gusto and PG is inexplicably getting her butt kicked when Harley rides in on the back of a roaring Caticorn to save her. A Caticorn is a green lion with a purple mane and ram’s horns. After causing a break in the fight the Caticorn suggests they get out of there fast but Vartox gets hold of Harley’s neck and, speaking about himself in the third person, commences to choke Harley. Harley gives Dark Vartox the old sad weepy eyes treatment and the Caticorn starts to purr. This befuddles Dark Vartox who gets confused. Harley reminds him that long ago he loved Power Girl so much he made statues to her but is now fighting with her. She goes on about the fact that her own relationship with Mr. J had its ups and downs too.

With a head full of Harley’s nonsense and kitty purring Vartox starts to snap out of Oreth Odeox’s trance just in time for PG to deliver a direct hit on his noggin. PG asks where the Caticorn came from and Harley flashes back to the story of being saved from a sea monster by the maned creature.

Suddenly Vartox is back and grabs Power Girl for a deep kiss. Feeling taken advantage of, PG knocks him on his butt again and they make a truce. To Harley’s amusement (and PG’s disgust) Vartox explains that He and Power Girl repopulated the planet using a Pregnoray. Yow.

Suddenly the three are reunited with Groovicus Mellow and Vartox’s ex girlfriends. Even Cherub is ok, but with bad memories of being exploded out of the bathroom in space. The newcomers transport off the planet.

Vartox continues to call PG Kara Zor-L even though Harley has convinced the amnesiatic Kryptonian that her name is Betty. The three fly out of the canyon they have been fighting in when they are faced with Oreth Odeon and his gang of attack Nuns. After some explosive battle shenanigans Oreth Odeox energy blasts Vartox knocking his clothes off.

The display of Vartox’s naked body, which he predictably displays proudly, is too much for the planetary prude. Power Girl takes advantage of the, um, distraction to blast him with her x-ray vision and throw him back to his spacecraft.

The three start to celebrate but Harley notices something Oreth called the Harvester of Sorrow approaching them.

This is another solid issue of Harley Quinn and Power Girl. It doesn’t have all the interesting references of the past issue but it is an action filled installment. I liked the transition of Vartox back to his good old self and the very different ways that Harley and PG interact with him are fun. Having the Ex Girlfriends come back so briefly just to leave again interrupted the story a bit but I think the authors wanted everyone to know they were all right. This is a fun romp not a story about tragic loss so I’m fine with this. After all, anyone who has been reading Conner and Palmiotti’s Harley books from the beginning know how this story ends so you shouldn’t be looking for shocks and surprises.

The art continues its high quality. I love the coloring of these books. Mounts and Sinclair’s colors are a real standout. Even without a psychedelic episode the colors give a very groovy look. Many thumbs up.

I gave the last issue of this book a very high rating so I’m going to climb down off of that this time. Maybe I’m overcompensating. I don’t mean that this has dropped in quality but the last issue was special to me. Many people I know that are also reading this title prefer this issue over last but they aren’t the ones giving out Batarangs. If you are enjoying this series you will be pleased with this issue as the story passes its halfway point and looks to finish strong.