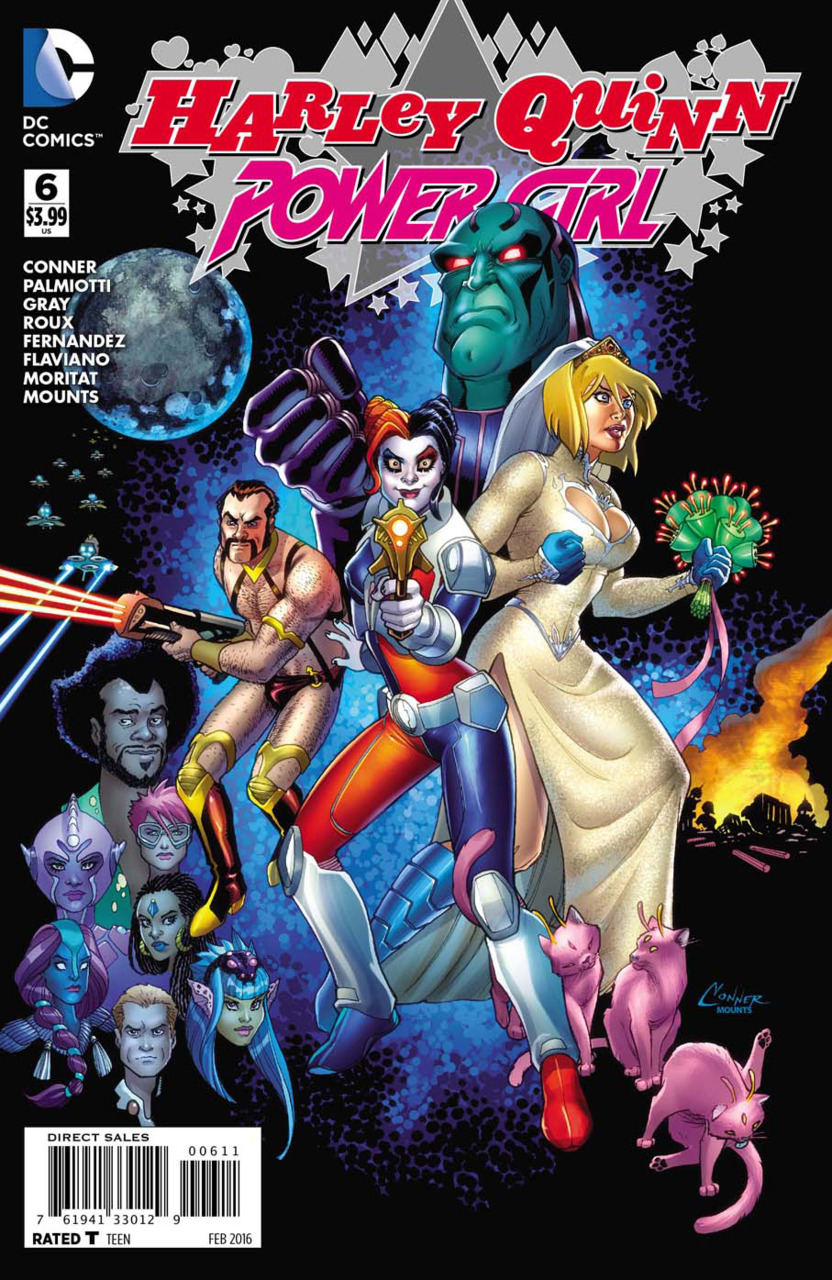 It is a wacky wedding day for Power Girl and Vartox as she and Harley try to get back to their own…book… in the final chapter of Harley Quinn and Power Girl #6.

I now pronounce you man and spoilers…

An intergalactic wedding is about to be held between Vartox and Power Girl. Vartox is ready with his sickeningly sweet vows. PG in a wedding dress is disgusted. Harley weeps at the beauty of the ceremony and the fact that Pee Gee doesn’t have her own comic.

Power Girl has agreed to marry Vartox so she and Harley can use V’s Teleportation Ring to get home. This fact doesn’t seem to bother Vartox who has enlisted a deep blue Elvis impersonator to conduct the marriage ceremony. Power Girl finally has enough of the purple prose nuptials and storms off with Vartox scrambling behind her. They agree to skip to the end of the ceremony but, against Vartox’s better judgment, Harley insists they ask if anyone has an objection to the marriage. A portal opens up whisking Vartox, Pee Gee and HQ to a world that looks very much like a 50’s middle American suburb. A young girl looks out the window and shouts “Daddy’s Home”.

Daddy Vartox is greeted by a throng of children of all ages who jump on him and greet him enthusiastically. One of the children is a teen named Junior Vartox, or JV for short. After the greeting the children’s Mother waits at the door with a martini. She has an unnatural resemblance to Power Girl. The kids all notice the resemblance and leave the adults alone to talk. JV stays behind and watches Vartox and the two PeeGees discuss things.

Power Girl is offended by the fact that Vartox has created a world where he is already married to her. Vartox isn’t very sensitive to her concerns and tries to mansplain the bounty of his love. She responds by punching him through a few houses. Suburban PG isn’t pleased with the treatment of her husband and levels a brutal blow on Kara sending her flying as well. Then the perfectly coiffed copy turns her anger on Harley who tries to make herself scarce. Vartox shows up and also is on the business end of Suburban PG’s wrath.

Just as Harley is about to get walloped, Power Girl Original shows up and slams the copy into a deep hole in the ground. Kara receives a punch in return that sends her flying out of the hole. The copy turns out to be a robot and Kara’s punch has left some exposed wires in her head. Harley pulls them loose disabling the android.

Vartox explains that he created this world because he is in love with Pee Gee but can never have her. He creates the portal for Harley and PG and after some more rich prose our heroes make their way through. On the other side there is the business anyone familiar with page 20 of Harley Quinn #12 will recognize, as the ladies get ready to take on Sportsmaster and Clock King. THE END

As this is the final issue in the miniseries I will first discuss this issue and then give some thoughts on the series as a whole. This issue’s plot was interesting and well done. I liked all the craziness of the wedding with an annoyed Power Girl and an overly romantic Harley. Harley, in her commitment to the whole wedding idea, makes the mistake of asking for objections which propels the story into the suburbs. The idea that the swinging Vartox would create a suburban fantasy world for he and his true love is also kind of ironic and funny. The last page is a copy of Harley Quinn #12’s last page and ends with a teaser for that book’s issue #21 which might be confusing for new readers to the series. But since the whole point of this miniseries is to get back to that book I think this is understandable. As a reader of Harley Quinn’s main book I really enjoyed it. All in all this issue has an intelligent plot implemented successfully by Conner and Palmiotti.

The art by Stephane Roux, Moritat, Elliot Fernandez and Flaviano all combine into a coherent whole. I’m not sure who drew what but the space scenes were what we have come to expect from this series while the suburban pages were drawn in an old fashioned comic style which was perfect. I particularly liked our first view of the robot Power Girl leaning up against a doorjamb with a martini and cigarette in hand. Classic.

Paul Mounts’ colors are an intrinsic part of the storytelling as usual. The rich purples and blues of the marriage make a strong contrast to the more traditional color saturation of the suburban panels. Mounts is one of my favorite colorists and he doesn’t disappoint here.

As far as the miniseries as a whole goes I liked the overall direction of the plot very much. With all of the twists and turns the goal of the adventure was always to get the Teleportation Ring and the six issues all move the story towards that goal. The concept of the mini was very strong and it kept the plot line together and moving forward. The series was strongest when Harley and Power Girl interacted and weakest when they were separated or not working off each other.

I also liked how the story was told across issues, though the story did seem to wander a bit. #1 and #2 were the introduction of Oreth Odeox as the Big Bad, #3 was the attack of Dark Vartox. #4 showed Vartox’s conversion and the defeat of Oreth Odeox. #5 was the battle with the Harvester of Sorrow, and #6 was the wedding story above and resolution. It was kind of strange that the Big Bad identified in the beginning was defeated in issue 4. However each issue had a nice arc and/or cliffhanger so overall it worked well.

In terms of a rating it is hard for me to separate this issue from the series as a whole so I’m not going to try. As much as I like the regular Harley Quinn book generally, I liked this mini even more since the plotting and characterizations were more vivid and purposeful. Also, the color work in this series was very very good. Congratulations to the team that wrote this book.