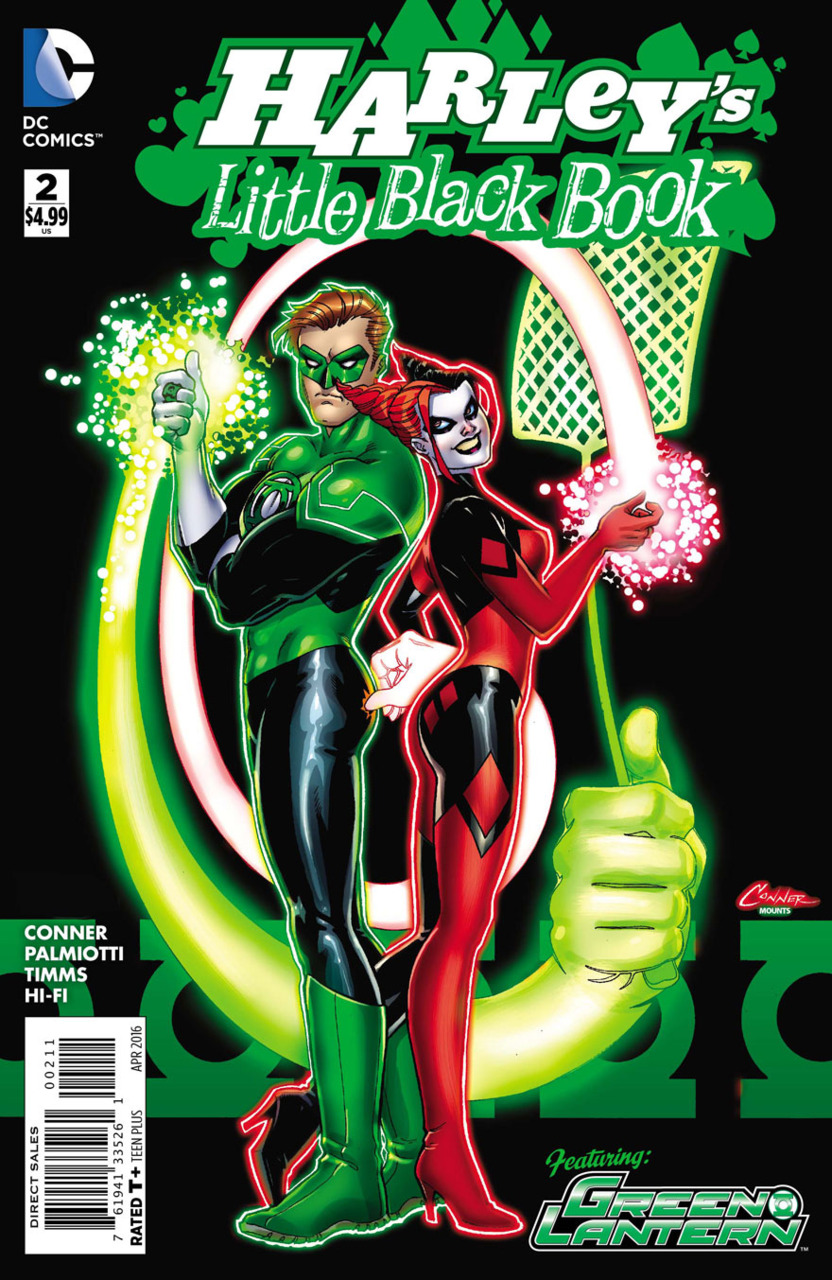 Harley loses her head – more than usual – as she causes an extracurricular extraterrestrial extravaganza with Green Lantern and a warship full of dangerous aliens in Harley’s Little Black Book #2.

Don’t spill the milk, its Spoiled below…

A spaceship crashes in Brice Canyon National park and the dying alien inside gives two less than brilliant travelers a square box for safe keeping. Not realizing that alien hardware can be powerful and dangerous the pair decide to open the box and sell the contents on WeBay. When they finally figure out how to get the cube open they find a green ring and a two chambered ring holder inside. They are unable to open the ring holder but luckily they accidentally dissolve it with some spilled milk. Released from their holder the two rings magically combine into one ring, half black and half red. The two non-genius’ head to WeBay to make their fortune.

Harley finds the green ring on WeBay but loses the auction to a Green Lantern fan who bids up to two hundred thousand dollars. As a consolation prize the ring bearers offer Harley the red and black ring for a mere five grand.

Meanwhile Hal Jordan, top gun test pilot and secret lime-hued superhero, is testing a new fighter jet. During the test flight he spots a sinking cruise ship. Hal quickly makes an excuse to land his jet and get into Green Lantern mode. He saves the passengers and crew but notices that his ring is behaving strangely.

Back in New York City the London Legion of Superheroes have landed in JFK to pay Harley a surprise visit. One of the heroes, Pubby, has to pull some scatological shenanigans to get around customs because he is legally forbidden to travel abroad.

Harley gets her ring and once she puts it on is turned into a crazy evil monster. Not like usual, worse. She uses her new found powers to throw some bad guys to their fiery deaths.

The LLS meanwhile have find a cabby that is willing to extort them to Harley in Coney Island.

Meanwhile, meanwhile Green Lantern senses that his ring wants him to go to NYC. Once he arrives he confronts Evil Crazy Harley and the two do battle. After they are unable to kill each other they decide to have a gigantic ring powered arm wrestling contest. Harley is about to win when an Azakarian War spaceship comes out of the sky and zaps Green Lantern. Harley is initially upset that her victory was snatched from her but is mollified by the Azakarian who promises her anything she wants in exchange for the ring. She initially agrees but the ring tells her that something is amiss. The Azakarian hits her with an energy blast and takes the ring from her, changing Evil Crazy Harley back to standard issue Crazy Harley.

Green Lantern gets Harley inside the space craft but she is quickly expelled by an energy beam. GL catches her in midair but is rendered unconscious by another energy beam and the pair plummet to the earth. Harley removes his ring and becomes Green Crazy Harley and destroys the Azakarian ship with a giant green hammer. After which Harley guilts Green Lantern into performing some smooching before he flies off.

Harley heads to the hot dog shop ‘Nateman’s’ where she runs into the London Legion of Superheroes. They are now broke after their cab ride and wiener feast. Harley invites them to stay with her for what promises to be an insane two weeks. Until next time…

Writers Conner and Palmiotti are bringing their A game to Harley’s Little Black book. This issue is chock full of clever references to Star Trek, Ben Carson’s pyramid theories, Big Trouble in Little China and the issue’s own cover! Harley is at full kookiness which is par for the course, but Green Lantern also has several witty moments. The characters are all very engaging and the jumbo sized issue seems to fly by.

John Timms art and Hi-Fi’s colors give us just what we have come to expect from a Harley book. The palette and lines give us a clear view of the plot. The style is very slightly cartoon-y which fits the tone of the story, not too serious so the comedy works, but strong enough to pull off the action scenes. The ring ‘CGI’ is a little clumsy however. Several of Harley’s ring based effects such as the giant hammer and the arm wrestling aren’t completely convincing and can take some time to figure out what they are supposed to be.

Mauricet does the art for many of the London League of Superheros pages. The LLS story is pretty disconnected from the main plot until the last page so the change of artist isn’t disruptive to the plot.

As for my rating, I have been a little hard on some of the Harley titles recently. With Conner and Palmiotti working on so many Harley titles I’ve felt that some of the writing was losing its zip. This issue however gets Harley back in top form with naughty humor full of pop culture reference. I am hopeful that now that they have completed Harley Quinn and Power Girl that they will be able to team Harley up with new characters and see what kinds of trouble she can get into.