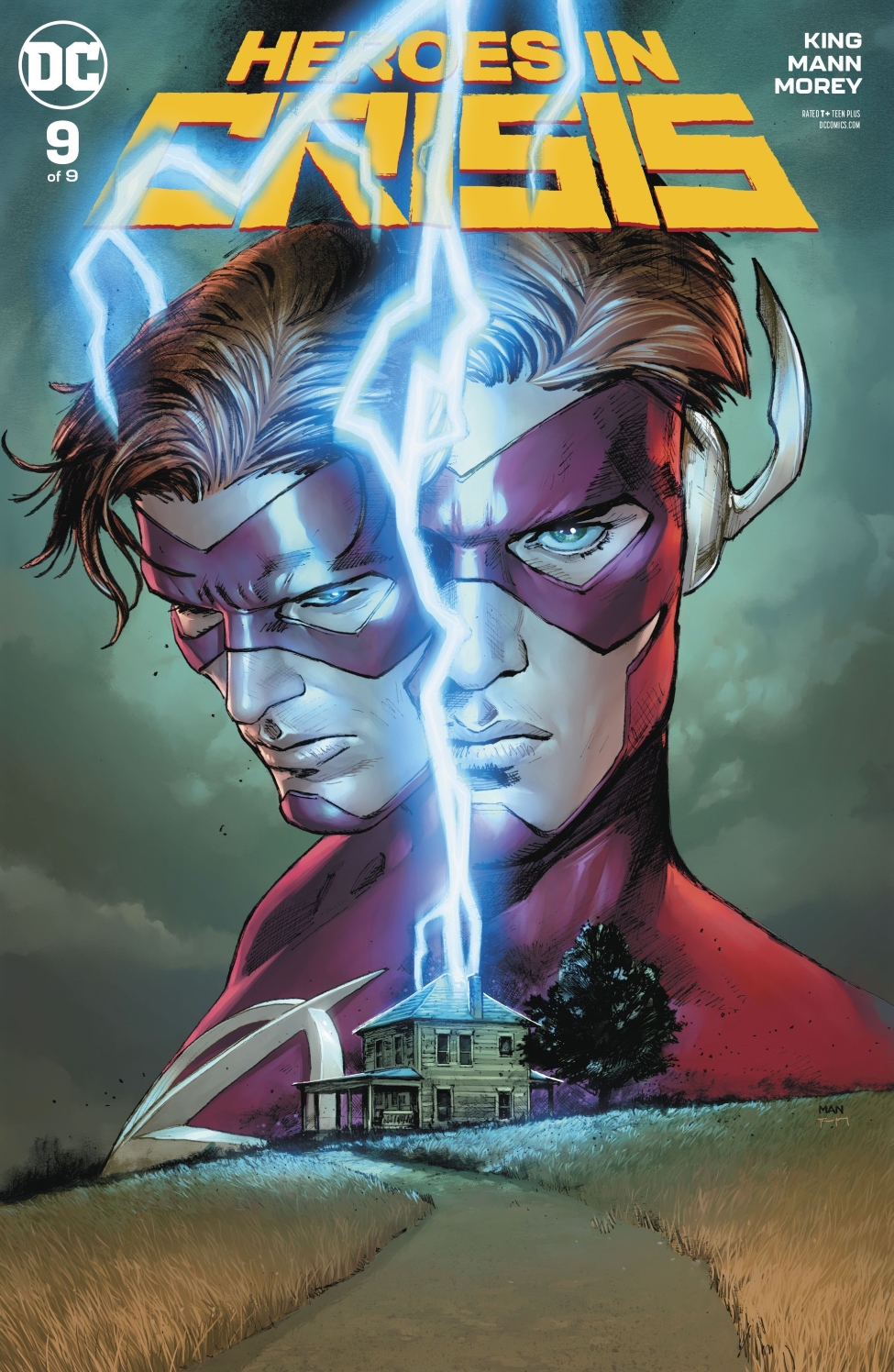 Overview: Wally West tries to come to terms with what has happened and gets a little help from some friends.

We see Wally confronting himself and asking that he plant a rose floating in Gotham River.  As Wally is about to kill himself, Blue Beetle, Booster Gold, Harley and Batgirl crash down on the spot in Beetle’s ship.

As the unlikely team exit Beetle’s ship, Harley spots a reborn Poison Ivy.  Ivy explains that she is reborn from the rose she gave Harley and Harley is ecstatic to see her.

Wally thinks one version of himself has to kill the other because of what he’s done, but the other version of himself reaches down and reassures him he’s not alone.  He explains that what Wally needs to do is talk to people and find out that other people are going through similar things and understand that they are in it together.

Wally explains to the other Wally why he did what he did.  They come to the conclusion that more violence isn’t the answer.  Wally is incredibly sad as he explains everything was just a mistake and questions how they can close the time loop if he doesn’t kill the other version of himself.  Booster Gold interjects with a solution involving going to the 25th century to speed clone Wally.  Wally agrees, but not before Harley gives him a hard knee below the belt for accidentally killing Ivy.

The story ends with quick panels showing the fallout from Wally’s decision overlaid with a monologue from Wally about the nature of hope.

Analysis: And so ends Heroes in Crisis.  I will miss reviewing this book every month because it has been a pleasure to read for nine issues.  Despite the controversy generated by some readers (and non-readers!), I felt like this last issue did a nice job concluding Wally’s arc in this story from an emotional standpoint.  The strength of Heroes in Crisis throughout the nine issues has been how openly and honestly it tackles what superheroes are going through.  That’s no different here as Wally having a conversation with his future self was an incredibly powerful moment.  It’s something I think anyone can connect to.  Oftentimes in moments of extreme depression and doubt, it would be so nice and reassuring to hear from a future version of yourself that everything will get better.  The way one of the pages is set up during this conversation is especially brilliant.  Everything Wally says has specific relevance to Booster, Batgirl, Beetle, Harley and Ivy and we get close-up shots of their faces as Wally says these things.  The reader is connecting to what Wally is saying through the other characters connecting to Wally.  Wally’s final monologue at the end of the issue is one of hope and his actions represent responsibility.

While I enjoyed the exploration of the heroes’ traumas and thought they were quite powerful, I do have to say that the plot itself didn’t completely stick the landing for me.  I’m not referring to the time travel aspect because I think people can poke holes in any time travel plot if they look hard enough.  I don’t think getting hung up on time travel is the point of this story.  I just don’t think Wally’s reasoning for leaking everything to Lois is strong enough.  I understand his reasoning in leaking it to other heroes so that everyone knows they aren’t alone, but letting the whole world in on the specifics of what was happening seems a bit extreme.  We also do not really get to see the Trinity and Barry react to Wally returning and owning up to what he did.  It would have been good to see this because the story started with them trying to solve this mystery and also because of the personal connection they have with Wally.  Unfortunately, this aspect of the book didn’t work as well for me.  I also felt like there were too many Sanctuary confessions pages here.  I appreciate the overwhelming number of characters who make an appearance and the subtle reminder to the reader that everyone is dealing with something, but it did feel like a little bit too much for the first time.

That being said, like all the previous eight issues, this issue is brilliant from a technical aspect.  The art team is absolutely stellar.  The title page alone will make your jaw drop.  If you’ve ever flown in a plane and seen the clouds and sun from above, you’ll absolutely get that same feeling of wonder and amazement here.  Mann does a great job conveying the emotion the characters are experiencing through facial expressions and incredibly realistic body language.  Morey’s coloring throughout the issue sets the mood and gives everything this golden, melancholy feel.  The open yellow field and the sunset sky fits well with the bittersweet note the series is ending on.  Everything I’ve seen from King and Mann working together on this series has me so excited for the upcoming Batman/Catwoman series.

Final Thoughts: While the plot may not stick the cleanest landing possible, this issue features some incredibly powerful moments from multiple characters all rendered with beautiful art.  And if you’ve been enjoying Heroes in Crisis, that’s what you are here for.