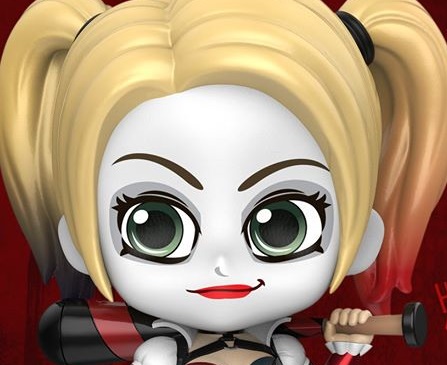 Hot Toys has released details for their latest Cosbaby figures, which feature Harley Quinn and the Joker based on their appearance in Batman: Arkham Knight. The figures measure just under five inches tall. Each figure features cute outfits and a fun accessory. They are priced at $25 each and are expected to ship May – July 2020. You can preorder over at Sideshow Collectibles now.

“What a pretty name. Do your friends call you Harley?” – The Joker. When it comes to the world’s most dangerous, unpredictable supervillains, Joker and Harley Quinn are almost without equal. Through endless interpretations across comics, film, and animation, the notorious couple in the Gotham City underworld has remained consistently relevant, gripping audiences with their irresistible madness. Based on the critically acclaimed video game Batman: Arkham Knight, Hot Toys is thrilled to present Joker, and Harley Quinn Cosbaby (S) with each standing approximately 11 – 12cm tall including figure base.

Holding the chattering teeth explosive, Joker in his signature purple suit with yellow shirt and green bow tie is accompanied by his iconic green hair and menacing bright red smile; Harley Quinn captured in her unique puff sleeve dress is standing with her right hand on her hip as she holds up a baseball bat in her left hand!

Journey through the Arkhamverse with the classic villains!