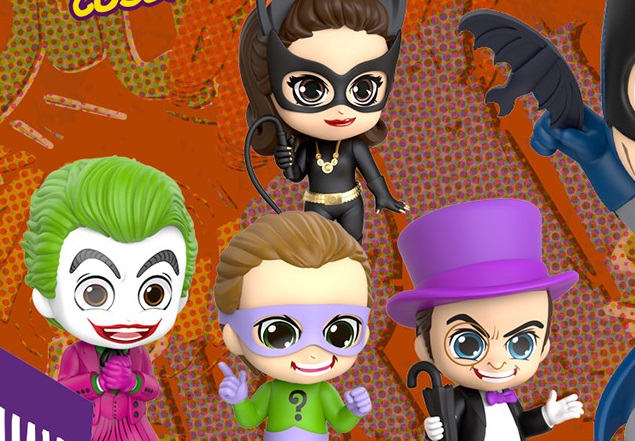 Just when you might have thought Hot Toys had announced every Batman figure they could for their Cosbaby line, they reveal more. This time the line features characters from the classic television series and features Batman, Robin, and Joker, as well as a special collectible set featuring Batman and Robin with miniature versions of Joker, Penguin, Catwoman, and Riddler. The three figures are priced individually at $25 with the collectible set priced at $83. All of the offerings are expected to ship between September and December 2020. You can preorder over at Sideshow Collectibles now. The Batman, Robin, and Villains Collectible Set brings fans the beloved heroes and their most memorable foes from Gotham in this special all-in-one package. Includes Batman, Robin, Catwoman, The Riddler, The Penguin and The Joker. Each miniature villain Cosbaby stands approximately 4-4.5 cm tall.
Price: $83 Taken inspiration from the opening scene, where Batman and Robin are running at the camera, the newly debuted Cosbaby presents Batman in his iconic grey jumpsuit with navy Batcape, yellow utility belt and Batman logo.
Price: $25 Taken inspiration from the opening scene, where Batman and Robin are running at the camera, the newly debuted Cosbaby presents Robin the boy wonder wearing his red and green retro outfit with yellow cape attached and Robin logo on chest.
Price: $25 The Joker in his signature purple suit brings the classic moments off the screen and into your display. Add the Joker to your collection today!
Price: $25