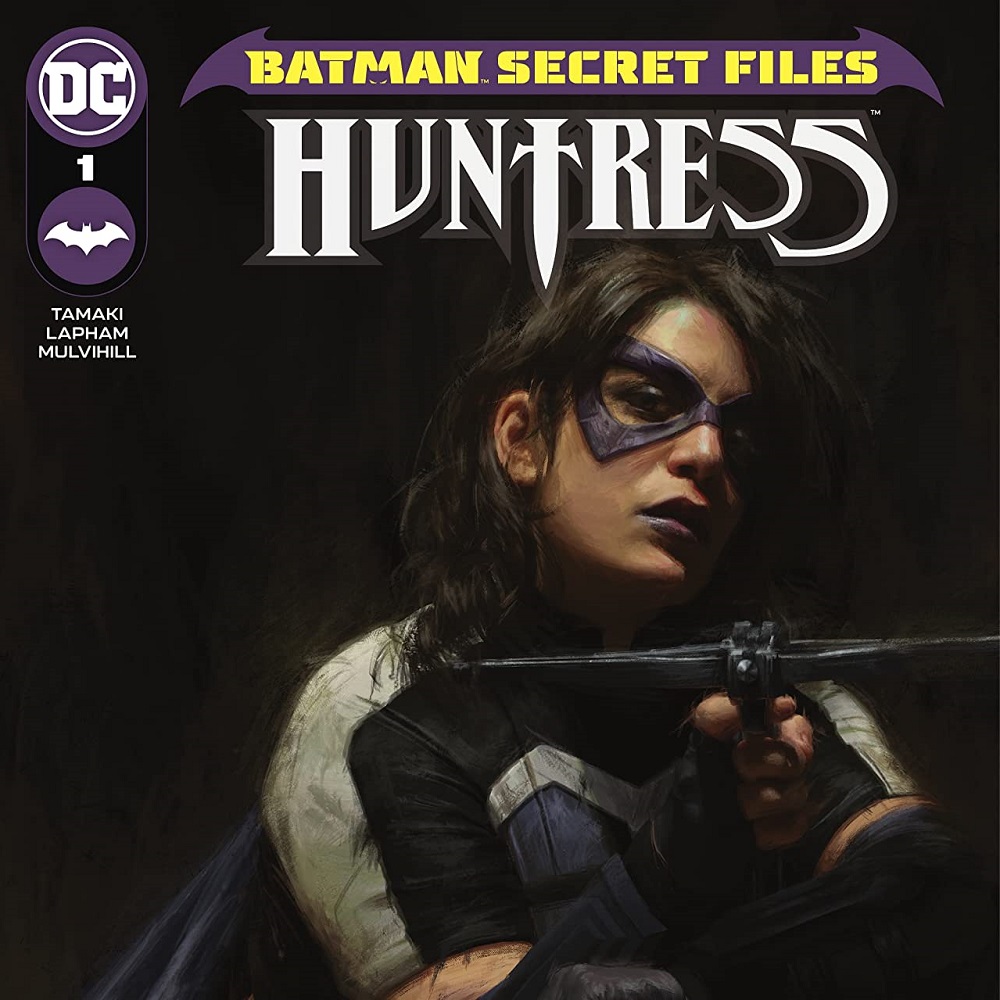 Overview: In Batman Secret Files: Huntress #1, Helena Bertinelli, the Huntress, faces the horror of being able to see Hue Vile’s parasitic puppets in this spinoff tale from Detective Comics.

Synopsis (spoilers ahead): As Huntress returns from the hospital (as seen in Detective Comics #1040) and after helping Batman with the Hue Vile parasite case, being infected, and being cleared from infection, Huntress falls asleep on her couch with her cat. She wakes suddenly, seeing another Vile parasite chasing a man in the city. She suits up and follows her vision to save the man from the Vile parasite-infected victim, but she can’t save both. Over the next few days, Huntress uses her ability to see what Vile’s parasitic victims see to save more from becoming victims, though she can’t save many of them. Pondering her next move, Helena realizes that Batman is infected and races off to save him in the upcoming Detective Comics #1041.

Analysis: Mariko Tamaki spins out the Huntress plotline from her Detective Comics run in this “one-shot” issue, though in reality, it feels a lot more like an additional chapter of that run than a standalone story. Threads from the Huntress backup tale she wrote, featuring the cat she adopted from a previous victim of Vile, give the tale a sense of solid placement in the texture of Gotham that Tamaki has woven, and her hardboiled voice for Huntress – distinct from the voice she’s given Bruce in her narrative boxes over in Tec – continues the strong sense of character Tamaki’s shown since she started her stay in the Batman Universe. Showing Huntress in her element as the defender of those preyed upon by people like her Mafia family is a solid choice, though the individual fights, while well-rendered and written, don’t really stay with the reader, except the final fight, clearly drawing from The Shining, with an added Alien-style body horror ending with the Vile parasite bursting out of the puppet’s eye. The reason it feels more like a chapter of Detective Comics than its own story is that the “climax” is Huntress’s realization that she needs to confront an infected Batman, rather than her solving a real mystery or defeating a villain. It’s a clue, rather than a solution, in a classic detective tale. And given that we know that the parasites will burst back onto the scene in the middle of Fear State in October’s issue, there’s little doubt that Huntress won’t be able to defeat the parasite in just a few more issues.

Acclaimed artist David Lapham provides pencils and inks for this story. Perhaps best known in Batman circles for his writer/artist-run on Detective Comics collected as “City of Crime,” Lapham’s style is full of thick, assured lines and deep shadows. It works particularly well for this story full of darkness and violence, though Lapham also slips some humor into scenes like the drive-in movie fight sequence and the images of Helena’s cat. Colorist Trish Mulvihill does fine work, not overshadowing Lapham’s linework or over-rendering the figures, but providing good use of light, shadow, and tint to drench the comic with the classic noir tone you’d expect from this team.

Irvin Rodriguez, cover artist for Future State: Robin Eternal, provides an absolutely gorgeous painted style image of Huntress aiming her iconic crossbow at the reader, with chiaroscuro light and shadow framing, and an intense stare. Riccardo Federici, another artist known for his intensely painterly style, creates a more action-packed shot of Huntress leaping down at the reader, but the washed-out colors make the dramatic lighting and warm skin tones of Rodriguez’s cover stand out a bit more.

Though not a true one-shot, this chapter in Mariko Tamaki’s Detective Comics run continues the fine work of characterization, tone, and atmosphere that began with her Huntress backups, and artist David Lapham gives the piece polish and well-rendered horror.