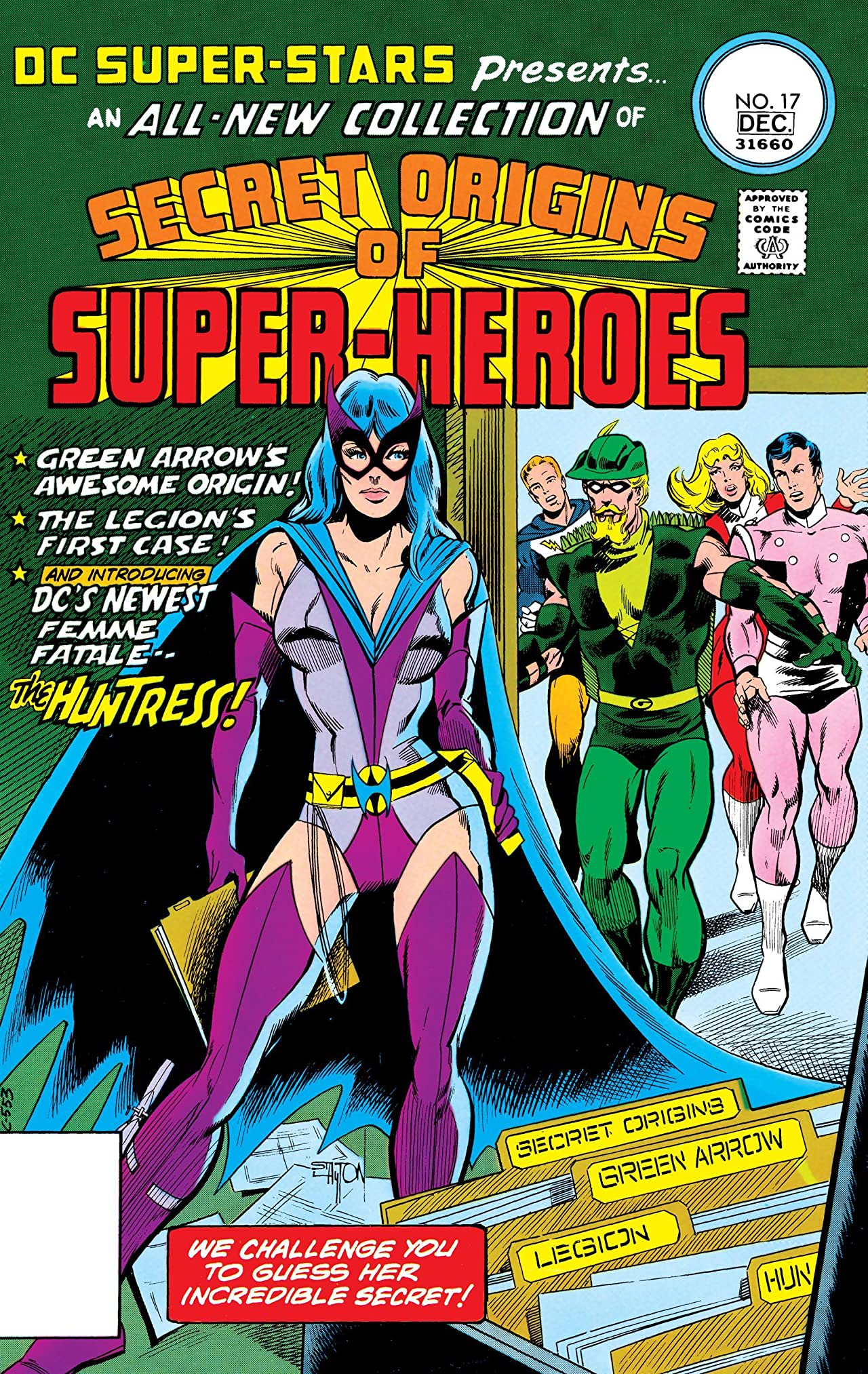 Opening: The pride and joy of Earth-2, Huntress stands tall in her debut.

Synopsis (spoilers ahead): In the world of Earth-2, things are very different but very much the same from our traditional DC Universe. The origin of “The Huntress” is as much an origin for the character, as it is an origin for the entire concept of Earth-2. Paul Levitz even has an entire page dedicated just to explain Earth-2, so for the sake of the readers, I’ll do it too.

Earth-2 is DC’s way of explaining how the characters can still be so young in the 60s, despite their stories originating in the 40s. Originally explored in an issue of The Flash, where the Golden Age Jay Garrick met with the Silver Age Barry Allen. The basic premise of Earth-2 is that it’s still the Golden Age, and all these characters have aged up and grown old.

In the case of Batman, he married Catwoman (Tom King eat your heart out) and retired to work as a politician in Gotham, while Selina stopped doing crimes and became a mother. Dick Grayson grew up to be an independent agent, and their darling daughter Helena became a beautiful adult. Unfortunately, a shadow of Selina’s past stops by, blackmailing her to commit one last heist. This catches wind of the police, who alert Batman. Unaware that Selina is actually involved, Bruce’s intervention in the heist results in Selina falling to her death.

Bruce officially swears off vigilantism and Batman forever, which pushes Helena to take up her father’s place and avenge her mother’s death by catching the man who organized the heist. Dressed up as the Huntress, she defeats her mother’s true killer and returns to her father, keeping her identity a secret, but hinting that there will be more stories to come.

And while we are not focusing on characters outside of the Batman Universe, this issue also features stories featuring the origin of Green Arrow and the first case that the Legion of Super-Heroes dealt with.

Analysis: If I may be so bold, Huntress’s origin story is one of THE greatest superhero origin stories ever made. This stands right there next to Spider-Man and Green Arrow in terms of best origins. It’s a complete story with its own stakes (We genuinely care about Selina’s death because we all know who she is, and the actions involving them feel real). It explains her abilities (she was raised by Batman and Catwoman; of course, she can fight crime). It establishes a clear status quo by the end of the story (fighting crime while hiding her identity from her father). And it does all of this without needing additional stories to explain it.

In direct contrast, Batman has one of the WORST superhero origins ever. First, we need the murder in crime alley to give motivation. Then we need a random bat flying through the window to give him his gimmick. None of that has anything to do with him traveling the world to get training, and by the end, it doesn’t even explain who his fiance is or his relationship with Jim Gordon.

Batman is an amazing character. I love him, and his stories are amazing. But there is a very big difference between having a good origin and having good stories to tell after the fact.

The fact that by the end of Huntress’s origin we have all our questions answered, and yet it only feels like the beginning, is brilliant. If you want a perfect comparison, the comic even comes with the revamped Green Arrow origin story, written by O’Neil himself. You, too, can see just what I mean when I call these the best superhero origins.

The art is also just great. It’s this perfect Bronze Age art style captured by Joe Staton, Bob Layton, and Anthony Tollin. I’ll admit to being biased here, but Bronze Age DC has, in my opinion, the best art in all of comics. Everything feels just a bit more realistically proportioned than it does nowadays, and yet it still looks fantastical. My only real complaint with the art isn’t even with the art itself. It’s with gutters, the borders between comic panels. They are just a little too thick for my preference. It makes the art feel claustrophobic, and there’s too much negative space, which distracts me from this gorgeous art.

Anthony Tollin has this cute and silly touch with the way he does the inking. We’re all very used to the blue Batman look, but I think Tollin was under the impression that the blue was just how lighting works in DC? Because Bruce, Selina, and Helena all have blue highlights in their hair. Bruce has a gray fade along the bottom of his hair, with a thick blacktop, but between the grey and the black, he’s got blue. Selina mostly has a thick black bob-do, but there’s this blue border around it all. Helena’s is even more hilarious. I think Tollin was going for a brunette look for Helena because 90% of her hair is blue. She looks like an anime protagonist sometimes.

This isn’t a huge criticism. I actually love this stylized look. Blue hair, a purple leotard with thigh-high boots. Huntress certainly has an iconic look to her, especially the incorporation of Catwoman’s domino mask, for a cat-like look.

I also love that they went with a completely original name for her – “Huntress.” They could have easily called her Batwoman or Batgirl (though if the point of this story was to draw in readers of the Golden Age, this may cause confusion as those characters already existed back then). The fact that she’s her own original superhero makes it very clear she’s not just her dad with boobs. She’s her own superhero and is going to have her own adventures.

Speaking of adventures, I have only read a few Huntress adventures on Earth-2, but the way this story ends, I can easily imagine a very promising status quo for it all. Helena going out at night to fight crime while trying to make plans with her father. Keeping this a secret so as to not get into a fight with him. We learn in a later JSA comic that Bruce actually becomes the new Chief of Police in Gotham. You could easily have Bruce become anti-vigilante and label Huntress a criminal, and we could have Helena and her father grow more and more apart.

There are so many ideas you could do for villains. Huntress is basically a proto-Batman Beyond in a way here. You can have updated futuristic versions of Golden Age Mafiosi and supervillains. Make some new villains. Have her go on adventures with Power Girl. After only reading a single origin story for Huntress, the book fills your head with possible stories that could be told with her.

Final thoughts: One of the best superhero origins every made, and a good story as well.