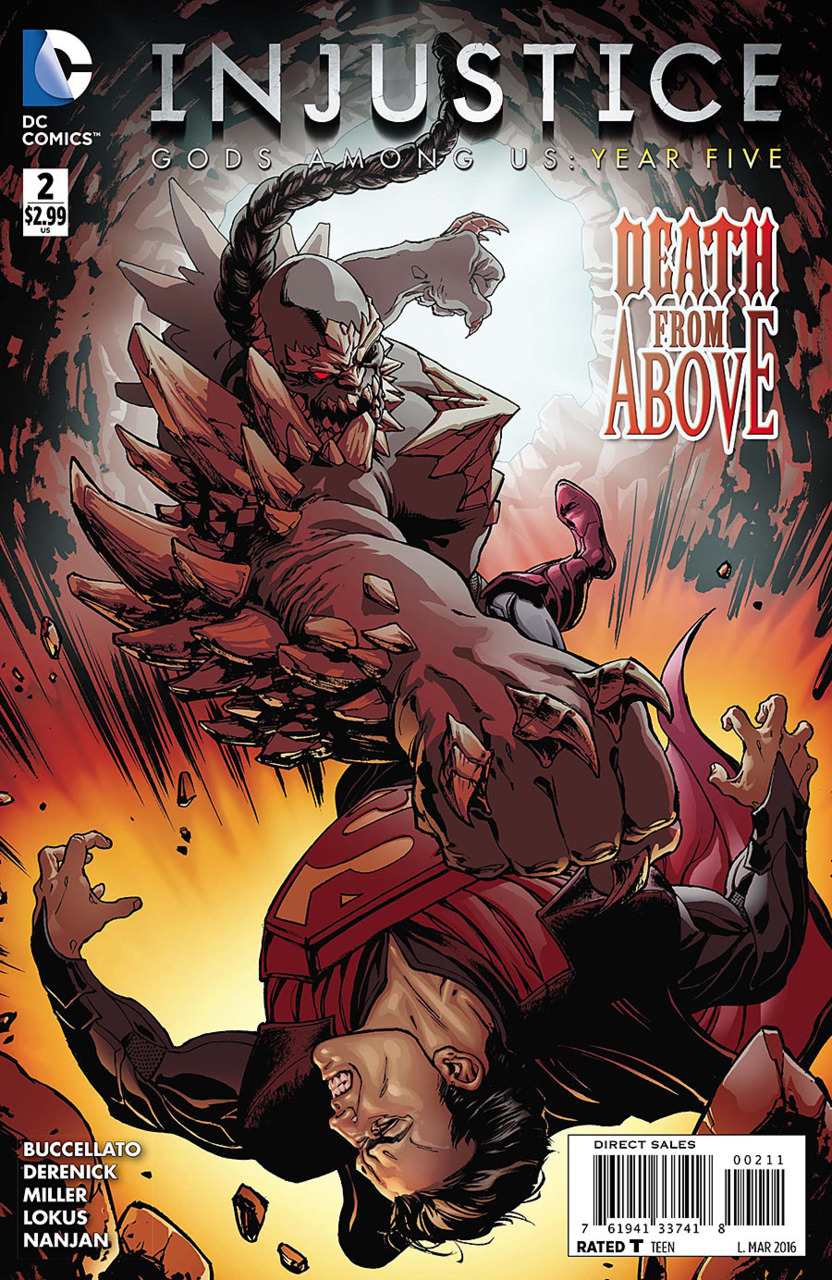 The issue picks up where chapter two left off with Bane entering the fight between Superman and Doomsday. Bane’s inner monologue remarks that the two super beings are equally matched and requires “a little help” to sway the outcome. To the surprise of Superman, Bane attacks Doomsday and holds him long enough for Superman to subdue him. Wonder Woman enters the scene and immediately picks up Bane and threatens to return him to the super villain prison he recently was broken out of prior to Year 5. Bane informs both Superman and Wonder Woman that, through his criminal connections, he can help Superman’s Regime and take down Batman.

In Coast City, Hal radios Superman for help in finishing off the Parasite. Superman arrives and takes the Parasite into space where he then throws him into the sun. Back on Earth, Superman dismisses Wonder Woman’s question as to where he took the Parasite. Bane informs Superman that he delivered Doomsday to Lex Luthor. Following this, many League members begin to argue about the Regime’s association with criminals like Bane to which Superman states that “this is not a democracy” and he is finished discussing these issues with everyone. The chapter ends in Germany where we see the escaped Bizarro seeing himself in the mirror, apparently, for the first time.

In chapter 4, Superman is with Cyborg discussing the status of the villains within their database when Wonder Woman asks to speak to him in private. While floating in the sky, she tells him that he should not shut out the other heroes of the Regime and that they are all in this together. After brushing off Superman’s pass at her, Wonder Woman adds that she disagrees with him regarding their association with criminals.

In Germany, Bizarro is still trying to figure out who he is and where he belongs. We are shown images of his view of the world behind a test tube when he was in at Lex Corp. He is then taken aside by a kind old man who clothes him and tells him that he is Superman.

The chapter concludes with Catwoman trying to get Penguin to join the Resistance with Batman. However, Bane enters and its revealed that Penguin is in league with the Regime. With some help from Killer Frost, Bane is able to knock out Catwoman. Waking up in a dark room surrounded by her captors as well as Killer Croc, Catwoman is informed by Bane that they will interrogate/torture her until she gives up the location of Batman’s hideout.

Well, another couple of good chapters for Injustice. I certainly enjoyed myself and was glad the plot is moving along at a good pace. The art team is delivering solid action in each issue while the writing team still leaves more to tease for future issues.

I brought it up in the last review that I am hoping for a more tyrannical Superman this year. After he killed the Parasite with little thought or remorse and told everyone that “this is not a democracy”, I feel even better about the rest of this year. Additionally, it seems that his indifference to killing is becoming contagious around the Watchtower. For instance, although it was not spelled out, it appeared that Cyborg was noting an increase in the deceased villain percentage as a big plus. This is a natural progression of the story and shows that the writing team is aware of where this year stands in the story of Injustice: Gods Among Us.

As I previously said, these issues always do a good job at teasing big moments such as the development of Bizarro, so that leaves much to anticipate for chapter 5 along with the interrogation of Catwoman.