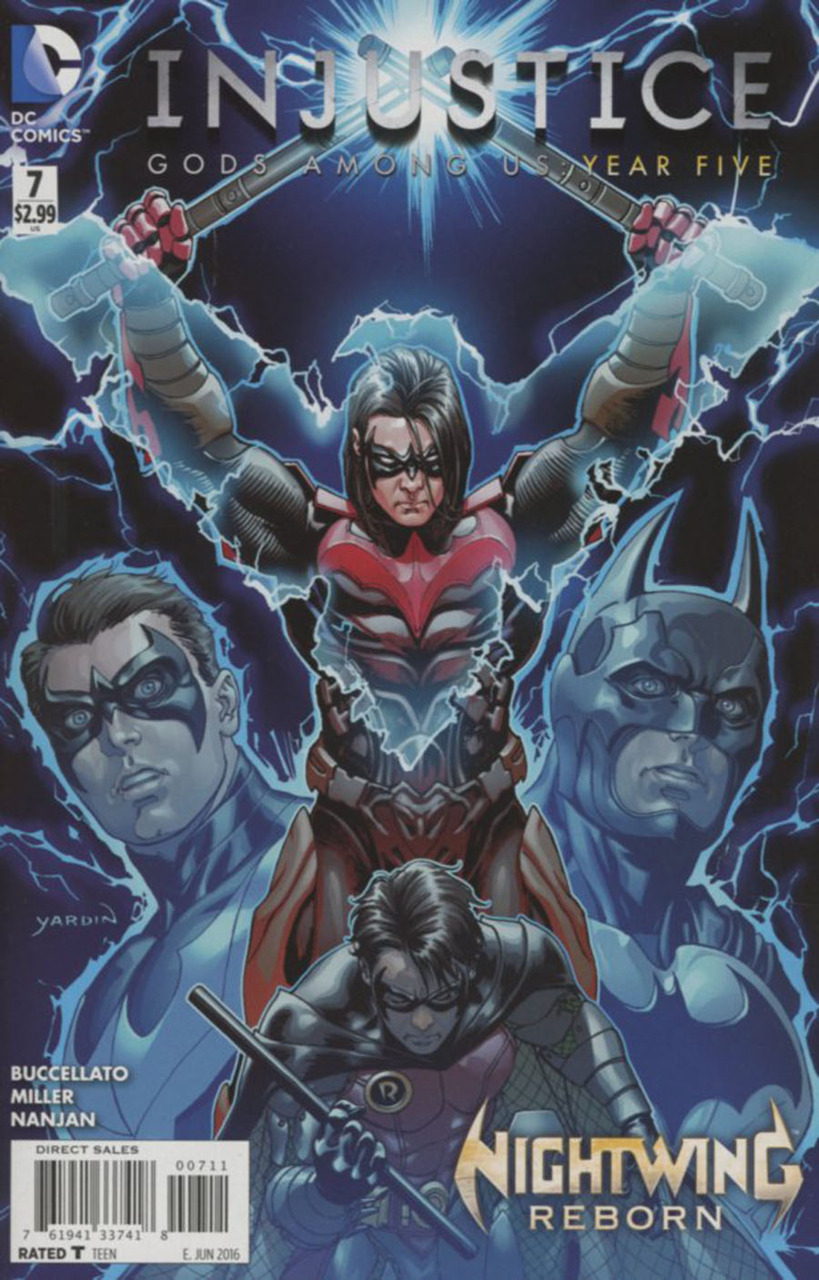 Synopsis: Opening in the Batcave, Damian enters and asks Alfred why he even cleans the cave since Bruce probably will not return. They begin to argue the outcome to Batman versus Superman with Alfred telling Damian that Superman has always been afraid and that is why he will lose to Batman.

In Gotham, Catwoman and Harley are robbing a jewelry store and discussing Catwoman’s recent departure from Batman’s Insurgency when Damian arrives. He informs them that they are breaking the law and he is going to bring them in. After a short physical and verbal bout with Catwoman, Damian gets gassed in the face by Selina. She leaves him on a rooftop after giving him one piece of advice to help him be true to himself…”reinvent yourself”.

Chapter fourteen opens with a running monologue talking about Damian’s progression from Robin into the man he is today. The narrator indicates that he has been checking in on Damian from time to time since he is worried that, given his brutal nature, Damian could end up going down a darker path.

Damian arrives at an abandoned warehouse in Bludhaven where a group of villains are meeting in secret. Among the gang are some of Batman’s infamous rogues gallery such as Scarecrow and Black Mask. They call in their own reinforcements and begin to fight Damian. The narrator notes that Damian could have radioed for assistance but that he would feel like doing this alone. Although sharing many characteristics of Bruce, the narrator states that Damian is still not a “finished product”. Damian is overcome by the gang but, while he is on the ground, the ghost of Nightwing appears and possesses Bronze Tiger. The last thing Damian sees is Bronze Tiger taking down the gang.

Damian wakes up on the watchtower and is told by Cyborg that the Regime was alerted to his distress beacon but, when they got there, all the gang members were unconscious and tied up. Damian insists that he did not do it. Cyborg has no explanation but tells Damian a package arrived for him. The package is revealed to be Nightwing’s uniform as well as a note wishing Damian a happy birthday from Dick.

As Damian suits up as Nightwing, Superman comes to check up on Damian. They both agree that Damian’s refusal to call for back-up was not courage but foolishness. Damian then shares his conversation with Alfred about Superman being afraid. Superman smiles and thanks Damian for being honest. The issue ends with Dick remembering Bruce being afraid that Damian would be seduced by the darkness and that Superman is that darkness. The final panel shows a much darker Superman turning away from Damian, clearly more affected by Alfred’s comments than he let on.

Thoughts: Being a big fan of the arc that Injustice took with Damian, these two chapters were a great read for me. On top of a great monologue from Nightwing, we also get to see the darker Superman that I have been wanting to see for awhile now.

From a strictly story point of view for Year Five, this issue did not really further along the plot. No major advances are made by the Insurgency and the Regime is no closer to taking over the world. However, we get to see more development of this world’s Damian and his path heading towards darker times. It was also great to see a very two-faced Superman. It is the kind of Superman I have wanted for the last two years of this story. He is a outright tyrant in the videogame so its important to show him balance that side of himself with a more public relations-friendly persona. This was delivered in this issue so I hope they keep that moving forward.

Miller was great on the art here and gave us the new Nightwing and a much more two-faced Superman. Both depictions were what stood out for me here. The sudden facial change of Superman felt very real and it made me feel sorry for Damian, even if this story can paint him as a brat at times. Buccellato gives us a lot look at all this from viewpoint of Nightwing. It makes it that much more tragic because of his limited influence on things that will come to pass. Although, if they manage to bring him in to help fight the Regime, I would be excited for that and a Deadman/Nightwing return.

My only minor issue here was that Damian called Bruce “dad”. He routinely calls him “father” which always seemed more in character for Damian. These were two great chapters so this is the only “negative” I could come up with.

In the end, a very minor nit-pick in a good character developing story. It did not really advance the overall plot but it was good to see more spotlight given to Damian who has had some rough times in this series with still more changes to come.