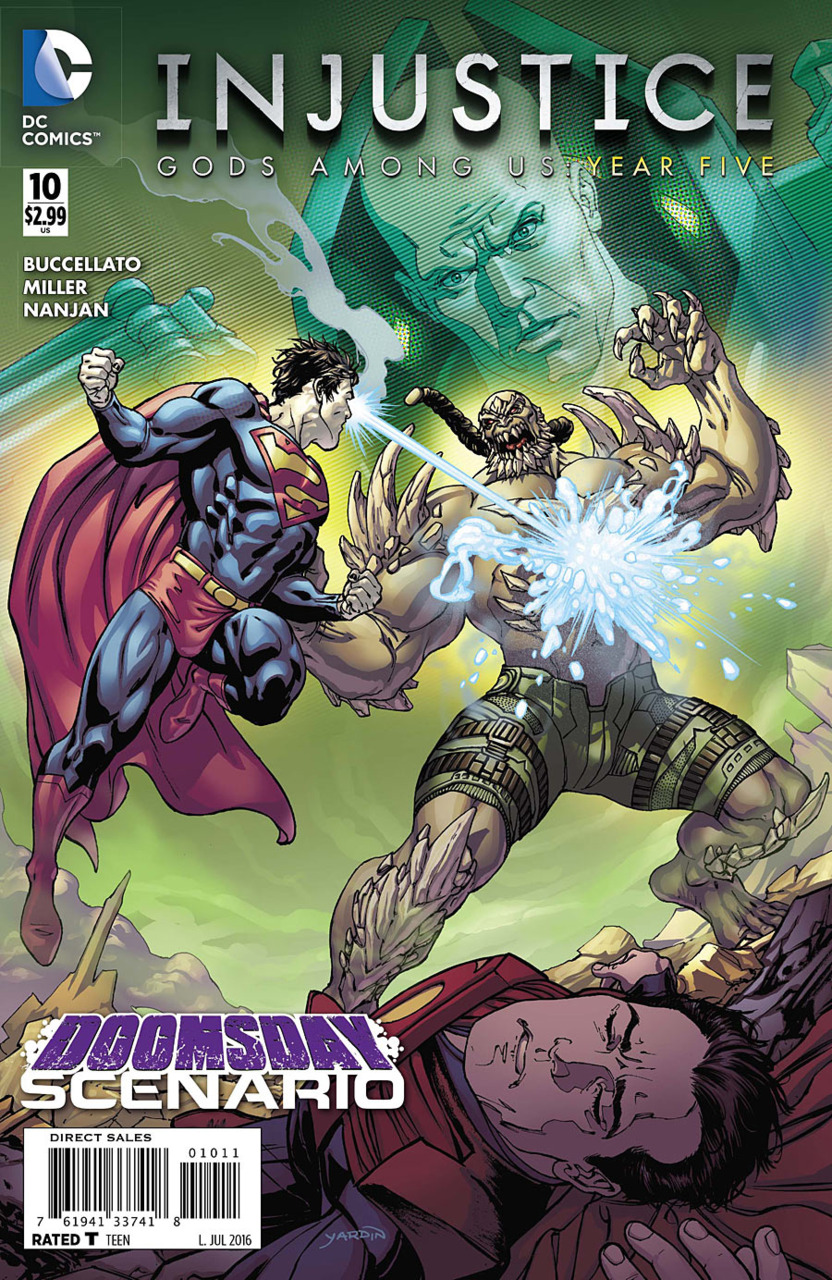 Synopsis: While flying across the world, Superman radios in to Cyborg and reiterates how much he wants them to track down the imposter Superman (Bizarro). The rest of the Regime members get patched into the conversation and updated as to the situation with the imposter. Superman lets the team know that he wants Bizarro captured but not killed to which Hal responds sarcastically that he thought that killing was the “Regime way”. He also makes a comment about voting on the issue to which Clark finally tells him to shut up.

Back at Lex Corp, Bizarro presents the body of Trickster to Lex and demands that he “fixes” him. Lex tries to explain that the boy is dead but Bizarro does not understand. Bizarro believes that Lex is his creator to which Luthor tells him that he “found” him in the arctic. Lex asks him if he could run some tests on him. The tests begin to conclude that his power levels are the same as Superman but with decreased mental capacities. Lex reveals in inner dialogue that he lied to Bizarro and he needs to figure out a way to destroy the clone before Clark figures out what he has been up to.

Cyborg radios in at that moment to announce Flash’s recovery and that he will be there shortly to begin construction of the super prison that Clark is wanting. In order get Bizarro to leave, Lex gives him a tracking device and points him towards the Fortress of Solitude in order to determine his origin.

After Bizarro leaves the lab, Lex gives a command of “seek and destroy protocol” through a tablet before meeting with Flash. The chapter ends with Bizarro finding the Fortress of Solitude and quickly getting attacked by a mind controlled Doomsday.

Chapter twenty picks up with Superman getting the report from Cyborg that the imposter is at the Fortress of Solitude. Superman arrives to find Bizarro trading blows with Doomsday who is being controlled by Lex. Superman asks Lex if he has complete control over Dooomsday to which Lex says “yes” but that Clark’s presence could confuse the monster. Lex’s inner dialogue comments that the mind control technology is working but that Doomsday is still losing. Superman intervenes to defeat Bizarro but not kill him so as to find out his origin. Lex realizes that he has an opportunity and unleashes Doomsday on both Kryptonians. The Regime members are confused by Dooomsday’s actions but Lex just restates that he told Clark not to intervene. Just before it looks like Dooomsday and Bizarro will kill Clark, Lex changes the programming and commands Doomsday to kill Bizarro because Lex is “not a murderer”. Superman tries to stop Dooomsday but is too late as Dooomsday crushes Bizarro’s skull.

The issue concludes with Superman dumping the body of Bizarro at Lex’s lab and wanting every known test run on him as to determine his origin.

Thoughts: This was, by far, one of the best issues of this year five of Injustice. It was the moment I had been waiting for when it comes to the showdown between Superman and Bizarro. I only had one problem and that was with Luthor, but overall I was really engaged while reading these chapters.

Having both Mike Miller and Brian Buccellato back for such a climactic point in the story was also great. Miller delivered with his fantastic facial expressions and made it almost painful to watch as Bizarro was killed.

My only problem was with the fact that Luthor decided not to kill Superman. Although I say it was a problem for me, I have thought that this strange characterization is just how the creative team wanted to portray Luthor in this Injustice Universe. He stated that he was not a murderer but then turns around and basically kills his own creation which seems far worse than taking down a tyrannical Superman. I am really hoping this gets played out more in the next few chapters with maybe bringing in Batman to call Luthor on his actions.

Overall, it was one of my favorite issues and this kind of dramatic showdown is what Injustice is all about. Despite not liking Luthor’s actions, it definitely could be made into an interesting plot point which leads us to getting the Luthor in the video game who is ready to put on his suit and go toe to toe with Clark finally. Even though Bizarro’s fate was already sealed with the fact he is not in the video game, it was still a great character arc seeing him in this universe.