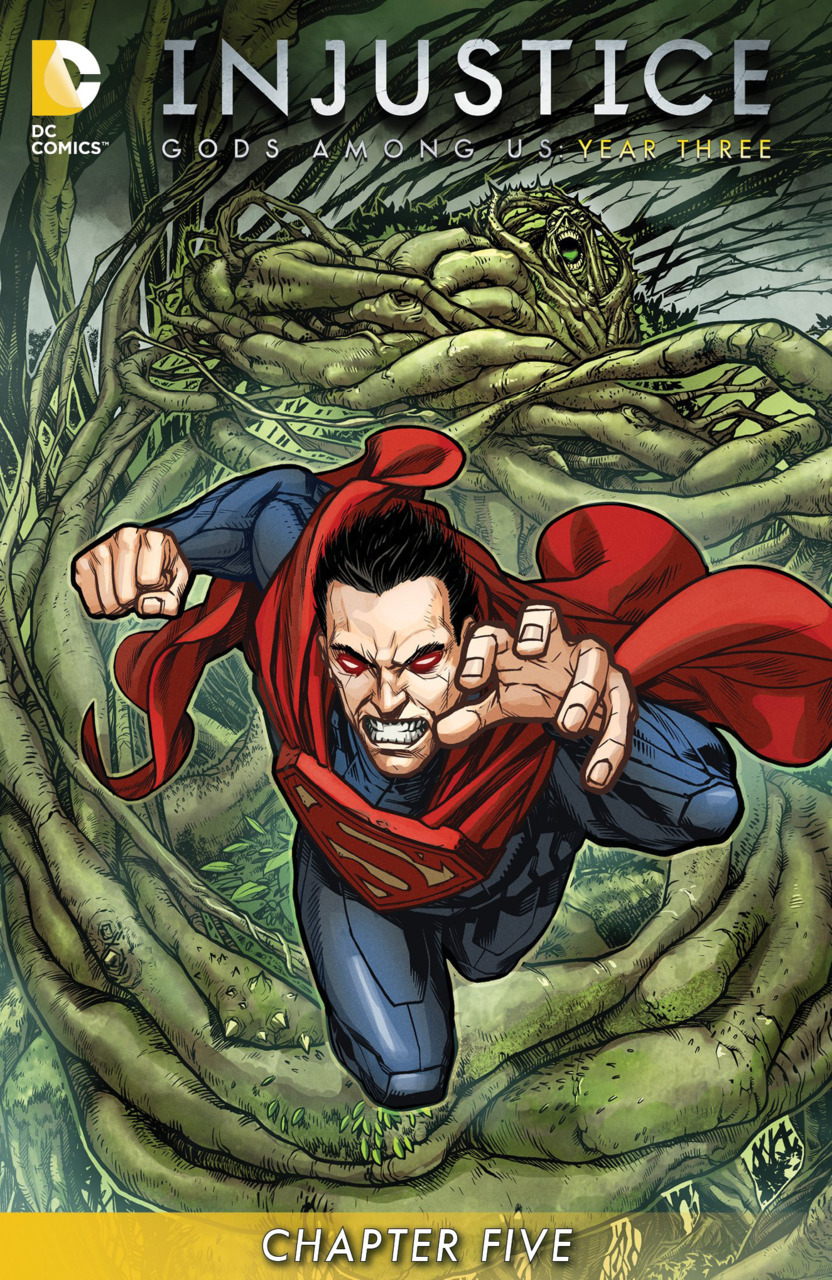 Editor’s Note: As we expand our coverage of DC titles that include Batman, some titles will be reviewed once a month when they are released more frequently than a monthly title. This will allow us to focus on the story elements that feature TBU characters rather than delving into the DC Universe as a whole since this is after all, The Batman Universe.

The third year of Injustice opens with John Constantine looking upon the corpse of a fallen member of the Green Lantern Corps. We see a brief recap of the ending to “Injustice: Year Two” with the final battle between Superman and the Green Lanterns, which resulted in lots of destruction worldwide. Constantine stumbles upon a survivor, his own daughter Rose (who has no idea who he is) and decides that he needs to protect her from what is going on. He eventually takes her to the Tower of Fate where the remainder of the Resistance has been hiding; he leaves Rose in the care of Zatanna and Doctor Fate while he seeks out help in Detective Chimp.

Following his visit with Chimp, Constantine contacts Trigon in order to help uncover information about a “force” that he can feel working against magic users and reveals that he believes his daughter Raven has been taken out of play. Meanwhile at the Hall of Justice, Superman, Sinestro and Hal Jordan (all bearing Yellow Rings) discuss how many of their allies have been kidnapped in the attack and that Batman has seemingly disappeared. Returning back to Constantine, he meets up with Batman and Detective Chimp and takes him to a location where they discover Raven in some sort of magical containment field. Batman explains that he had done this, needing to take Raven off of the board and keep her from helping Superman.

Sinestro eventually captures one of the police officers that was in league with Batman and takes him to Superman. He threatens Detective Sprague and his family with information on the location of Batman, but the unfortunate officer doesn’t know. Sinestro then promises that he will make sure, implying that he will torture him to find out the truth. Meanwhile at the Tower of Fate, Harley Quinn converses with a restrained and gagged Flash and talks about how all the people she has cared about were taken out by Superman (Joker, Green Arrow and Black Canary). Zatanna arrives and whisks Harley away to the home of Jason Blood, better known as the host of the demon Etrigan. The Resistance has gathered to discuss the threat of not only Superman, but this unseen presence that could be in league with him. The meeting is quickly broken up when Harvey Bullock attempts to leave due to the fact he doesn’t want to work with a monkey (Detective Chimp) and opens the door to Blood’s home. With the seal on the home broken, the magical unseen force reveals itself as the Spectre and ends up destroying both Blood and Bullock while severely wounding Chimp.

The Spectre begins to magically assault Blood’s home and Zatanna manages to erect a forcefield to protect them. Klarion sends his cat Teekl outside to see what is happening, while Batman begins shouting orders to find a place to hide. Constantine steps up and begins berating the Dark Knight on his weakness due to Superman breaking his back, implying that his spine has been literally and figuratively broken. Batman eventually takes Constantine out in one punch and has Zatanna open a hole in her shield so he can talk with Spectre, while she gets all of them back to the Tower. Batman attempts to reason with Spectre seeing as they are both people looking for vengeance…this provides enough of a distraction to allow Zatanna to teleport everyone away. Sometime later, Batman approaches Constantine who tells him that only his back had been broken, not the rest of him. Batman had a chance to take out Superman and blew it while many people died. Constantine ends with saying “I need the guy I saw today…the guy who can stare down the Spectre. I need Batman.”

Elsewhere in the Tower, Harley Quinn attempts to save Chimp’s life with the help of Alfred and Zatanna. Rose walks in accidentally and wonders if the monkey would be okay. Doctor Fate arrives and is berated by Harley that he should be helping them treat Chimp as he is a “doctor”. After a long discussion on what exactly Fate is, Harley dismisses “Mister Fate” and gets back to helping Chimp. Returning to the Hall of Justice, we see Sinestro torturing Office Sprague for Batman’s location. Superman eventually arrives and tells him to stop but Sinestro convinces him to let the torture continue. Spectre eventually arrives with information for Superman, and the two begin to discuss the powers that are opposing them. The issue ends with a scene back in the Tower, where Constantine comes across Rose and Fate. Rose attempts to cheer Constantine up by pulling a coin from behind his ear (a similar trick John used on her at the beginning of Chapter 1). Rose runs off while Doctor Fate informs Constantine that what she had done was not a usual trick, but true magic as the coin had not existed in the Tower before she pulled it from behind his ear.

The Injustice series has always been a favorite of mine. Year One established the circumstances in which Superman began to rise to power while dealing with his grief over Lois’ death. Year Two saw a massive conflict between the Green Lantern Corps and Superman with a revelation that the Guardian’s had allowed Krypton’s destruction. Now we come to Year Three, time for some magic.

It’s interesting how each “Year” of the Injustice saga has a theme that showcases how we would eventually get to the alternate world seen within the video game of Injustice. All the questions that we have asked about this universe are slowly getting answered…why didn’t the Green Lanterns stop Superman? What happened to Green Arrow? Why would Hal join Sinestro’s Corps? And now we are faced with an even more powerful foe…magic itself. Superman already has the corner stone with the Sinestro Corps at his side, and now he’s just pulled in the Spectre. This new arc has only begun to ramp up and I am excited to see where the plot takes us.

The writing in this series has always been excellent and as stated, I am interested to see where this magical arc will lead us. Although I am left with a few questions, which hopefully we’ll get answers to. What happened to Raven? Why did Batman lock her up and how? And what part will Rose play within the story? I guess leaving the reader asking questions is a good thing because it definitely keeps me coming back week after week.