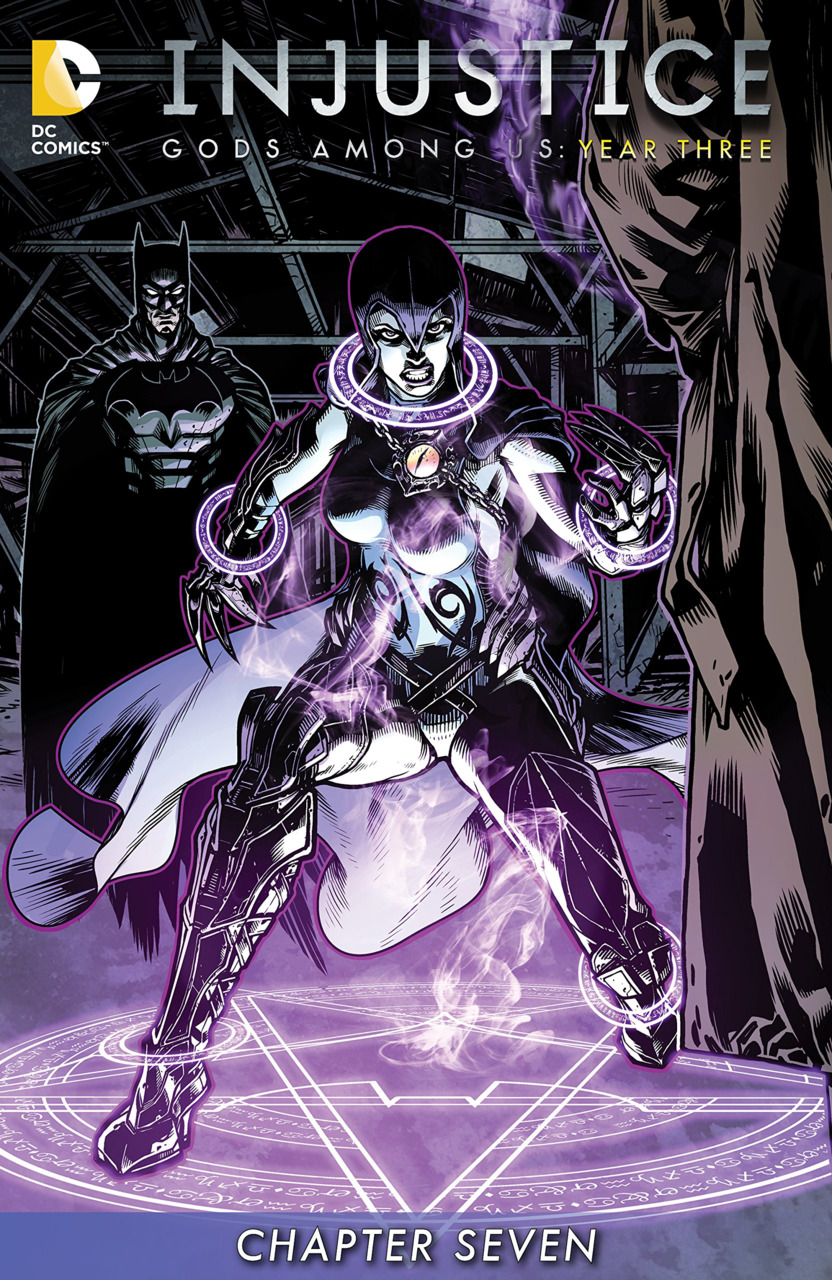 Everybody loves Raven. Or so the title of this week’s Injustice could have read. Tom Taylor takes a chance this week by placing a heavy focus of this weeks issue on a smaller character in the DCU. I am sure that at this point in the review many fans are proclaiming their love for Raven into the heavens, however, when compared with players such as Batman and Superman she is still relatively unknown. Even as a member of the Teen Titans she often falls into the shadows of Robin and Beast Boy. I found this move by Taylor to be a welcomed breath of fresh air. Using this method solidifies Taylor’s ability to keep the story on pace utilizing secondary DC characters.

The book opens in Gotham with Raven being held captive by mystical forces on the floor of a church. The situation seems dire until a curious feline enters the room and inadvertently frees Raven from her magical restraints. This act allows Raven to release her astral form into the heavens in search of the assistance of Superman. It is at this point that we quickly learn that this release was a trap designed by Constantine in order to get the Man of Steel to leave his perch high above the earth and descend upon Gotham. Spectre attempts to thwart the contact between Raven and Superman, however, his attempts are an exercise in futility. Raven pleads with Superman that her body his being held captive by Batman and Constantine in Gotham. Her celestial presence is then ripped back into her body on the earth below.

Superman’s concern for Raven seems a little out of place in light of the events that have prefaced this issue. One might assume that Superman would be a bit more hesitant of plunging into the unknown. However, it is Superman we are talking about and he has never been one to abandon a person in need.

Although Spectre again attempts to stop Superman from falling into a potential trap, Superman springs into action and descends upon the location of Raven’s body. Upon arriving at the church, it does not take the Man of Steel long to work around the magic and force his way into Raven’s holding cell. Raven immediately thanks Superman for coming and he quickly disbands the supernatural chains that bind her. However, we quickly learn that everything is not quite as it seems. We quickly learn that Raven is not Raven at all and are left with Superman bond on the church floor with Constantine settled proudly above his immobile body.

This week’s chapter of Injustice kept the reader engaged at every turn and sets up a great plot heading into the next chapter. However, it was the artwork that truly stole the show this week. Vibrant colors and striking contrasts brought the mystical nature of this series to life in every panel. I am confident that there are many great things to come in this series and hope that Taylor can keep the story moving forward utilizing primary and secondary characters alike.