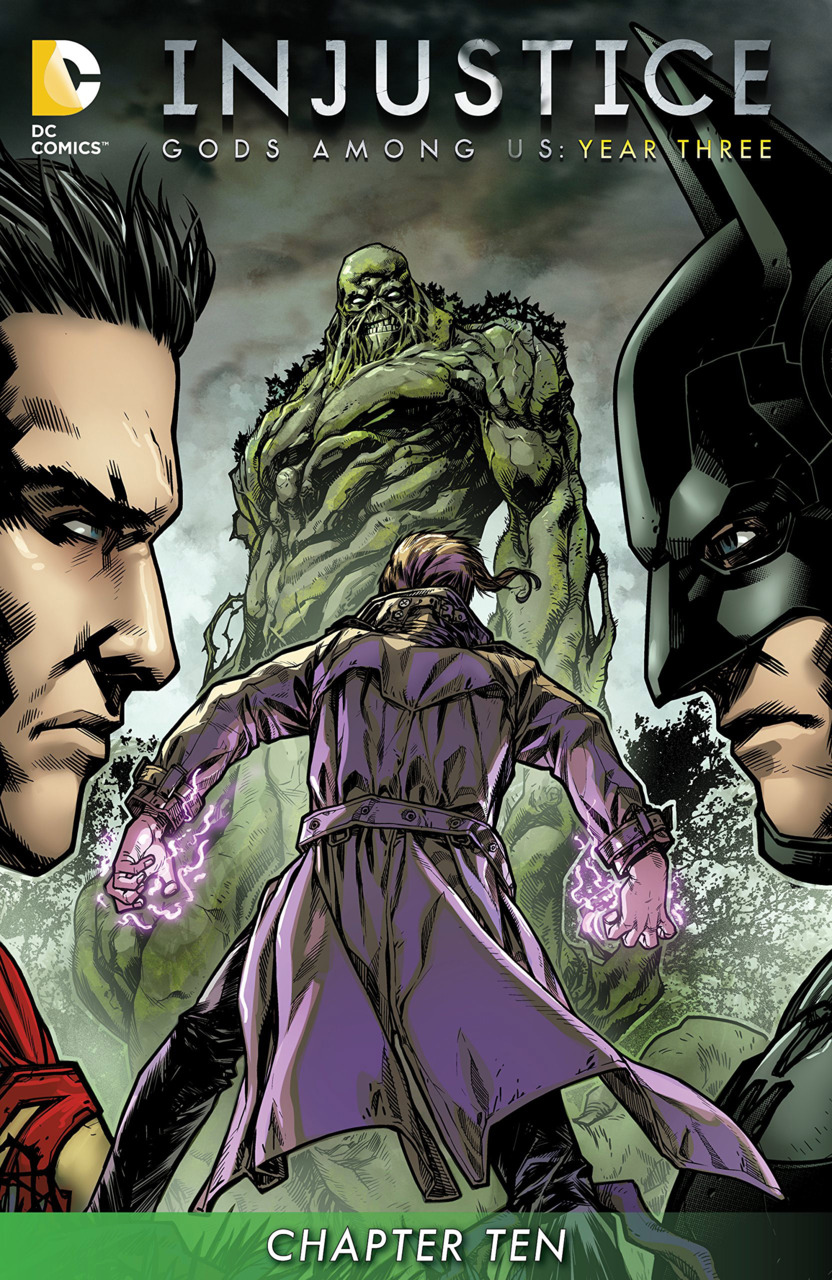 Ladies and gentleman, the return of Batman! I was thrilled this week to see Batman return to the Injustice story. Although the story does not revolve around Batman, it was good to see his character contributing to the Injustice mythos. And since this is a Batman centric website, I find it prudent to mention the return of the Dark Knight.

Batman aside, this issue opens with the further destruction of Deadman. It was sad to see this character eliminated from the story. Of all the characters that are currently in play, Deadman appeared to be the purest in heart. His intentions appeared to be beyond that of the current struggle and are rooted in kindness and peace amongst all men. However, the Spectre quickly dismisses Deadman when he realizes that Jim Corrigan is not the formers current vessel.

The story moves quickly to Batman and Constantine confronting Swamp Thing looking for assistance in the current battle against Superman and his legion. Tom Taylor uses this scenario to explore issues that are relevant to the current media landscape. Specifically, he uses Swamp Thing to emphasize the idea that human beings are not the only entities that depend upon the earth for survival. Swamp Thing implores to Batman and Constantine that the plants of the Earth are his primary concern and that he will claim allegiance to whichever party seeks to save Earth. This leads to Batman learning that although he does not wish to harm the people of Earth, Swamp Thing has already agreed to assist Superman in his efforts. Before the culmination of this issue, Taylor throws one more curve ball that will change the game moving forward.

The demise of Deadman brings a new and exciting plot point to the Injustice story. Who will replace Deadman in his efforts to right the injustices of the world? I will be the first to say that I never imaged it would be Dick Grayson. Let me repeat that, Dick Grayson is the new Deadman! I am thoroughly excited about the potential that this could bring to the story line. How will Batman react? Will he hang on to any bit of his humanity? There are all questions that will only be answered as the series continues to move forward.

It is rare in comics that the mind is asked to question the ideals that they have held true for many years. Tom Taylor demands that the reader take under consideration the motives of characters they have loved and followed for many years. I commend Taylor for taking this approach and am confident that he will use this tactic moving forward in order to breath fresh air into a medium that has been riddled with clichés for far too long.