Review: Injustice: Gods Among Us Chapter #36 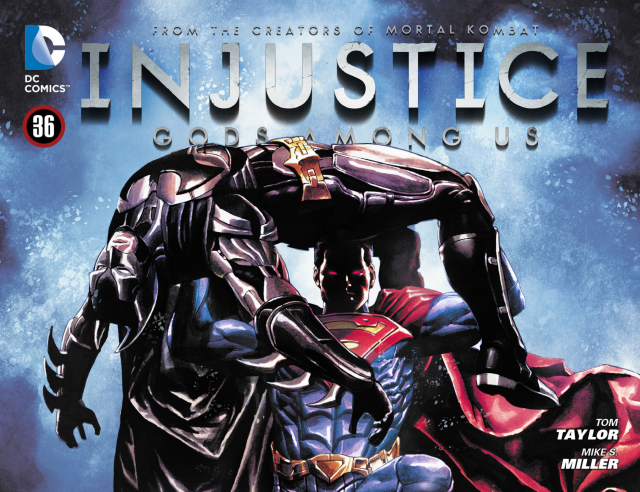 This chapter opens with a snap….of Batman’s back. Picking up immediately where the last finished, we find Superman snapping Batman’s spine across his knee in the opening panel. Glancing at the batcomputer, Batman notes that the analysis of the “super-pill” has completed, meanwhile Superman comments on the fact that he is going to lock Bruce away with the rest of Gotham’s monsters.

Superman holds his boot on Batman’s back and warns the Dark Knight to stay down and stop resisting, but Batman counters that he was not trying to fight, but just “trying to distract (Superman).” Clark whirls around to notice the “super-pill” and asks what Batman has done. He responds that he has analyzed the pill and is now able to synthesize it, and notes that they’ll be able to stand up to Superman now.

Something snaps further inside the Man of Steel as we see him push his hands down on Batman’s broken back. Bruce responds that he won’t tell him where the transmission of the data went and that he wants Clark to remember this moment “when (he) resorted to torture for the ‘greater good’.”

Superman begins to back away at this remark stating that he didn’t mean to, but Batman pushes more stating that’s it’s easy to blame someone else and that this way makes it easier to justify the atrocities that Superman is committing. Batman finishes by calling him just another thug.

At this point a hand lands on Superman’s shoulder, and Clark turns around to find Alfred standing behind him with a severely disappointed look on his face. A quick glance shows the “super-pill” missing and with a head butt from Alfred, the Man of Steel crumbles to the floor. Alfred says that his is disappointed in Clark Kent and with a statement of “no more” begins to pummel Superman. With the powers of a Krpytonian coursing through his veins thanks to a tiny pill, the Wayne family butler beats Superman into the ground while crying “YOU DON’T GET TO HURT MY FAMILY ANY MORE!”

Alfred leaves a bleeding Superman sprawled on the cave floor as he picks up his fallen master and heads to the teleporter and escapes. One day later finds Superman and his future regime standing on the floor of the United Nations. Surrounded by Cyborg, Flash, Green Lantern, Lex Luthor, Raven, Shazam and Robin, Superman delivers a speech to the world and states that Batman (now labelled a terrorist) is in possession of a deadly weapon. He goes on by saying that he will continue to fight for peace and against the terror being spread by Batman. With a final statement about being watchful and ever vigilant, Superman is joined by several ranks of soldiers. The issue closes with Superman stating he will save the world “whatever it takes.”

Wow. What a way to finish the first major arc of this series. I’m a little speechless on how to write about this chapter. I will start by saying that this issue reads very quickly…and this is good and bad. Good because you get to experience this story in quick succession and bad because it’s over far too quickly.

So I read, sadly, that Injustice is going on hiatus until 2014 and this is truly a downer. This series has been so consistent in quality that it’s tough to see it go on break. But personally I think that giving the creators a bit of time off will allow them to come up with some truly awesome stories in the coming year.

Okay, let’s talk about the issue! First it’s always great to see a Batman vs. Superman fight…of course I’m always one to argue that the Dark Knight could take out the Man of Steel, but that doesn’t quite happen here. If I thought that last issue was sad because we see the crumbling of the World’s Finest friendship, this issue is just truly heartbreaking. Batman pulls out all the stops in trying to get Clark to realize the path that he’s walking on, and all he gets is a couple more shots to his already destroyed back.

Lastly the shining point of this issue: Alfred vs. Superman. Plain and simple Alfred taking out Superman was amazing. I definitely think that he should be the next DLC character for the video game. And whoever says they didn’t get a little choked up while Alfred his smashing his fists into Clark and screaming to leave his family alone is totally lying.

Beautiful writing and some amazing art to boot. I look forward to this book’s return in January.

Injustice: Gods Among Us Chapter #36: