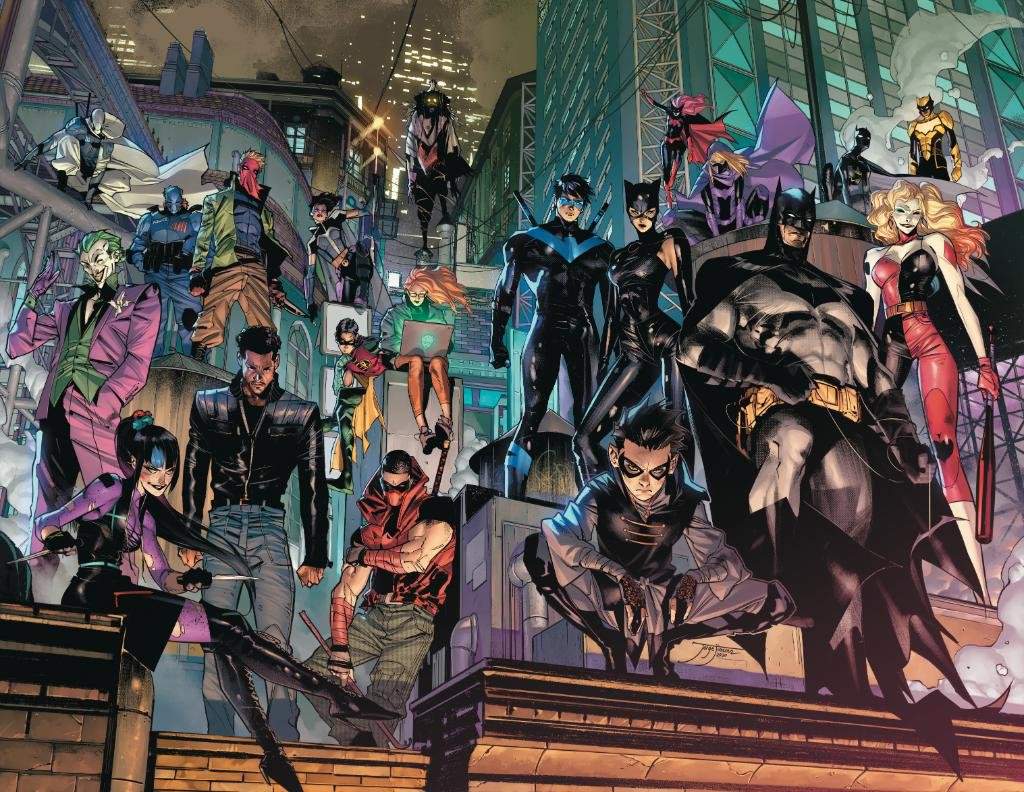 And the end is here. Our final look at James Tynion’s newsletter takes us away from his time on the Bat-Books. Instead, he shares his advice and hopes for what future Batman writers will keep in mind when they have their turn writing the Batman title. And while Tynion’s last Thinking Bat-Thoughts has been released, there is still plenty to think about.

Thoughts: Tynion has a real sense of being a team player. He’s got his ego, he’s got his ideas, but unlike Morrison, Snyder, and King, he appears to be much happier giving away pieces of his plans and able to work with others to incorporate their plans into his. Perhaps that doesn’t make for the kind of runs that stand up and shout “I am Important Batman Comic,” but this run has been incredibly fun to read, especially with the artists that Tynion has been able to work with. I don’t think most writers have the ability to think in such a collaborative, and even managerial, way as Tynion. He’s got a gift for the office politics and how they interact with the creative decisions that I think most writers prefer to ignore – but cannot, as Tynion points out – as those decisions always impact the whole office, so it’s generally better to know what that impact will be and get in front of it, rather than behind.

Thoughts: Anyone who reads Tynion knows that he thinks Batman is part of a vast family of new and old characters. Anyone who honestly thinks about Batman’s history will acknowledge that this has been true for eighty years. And I wish future Batman writers would pay attention to his final two sentences of advice – it’s better to have a Batman with often complicated, but not boring “I work alone” relationships.

Thoughts: Batman: Year One is my favorite comic of all time. It’s famous for being “realistic,” but it’s very poetic and in a lot of ways not realistic at all. I think Frank Miller (writer of Batman: Year One) and Tynion both understand this and write it quite well. What is more important than “realism” is “connection” – and the differences in the neighborhoods seen in Tamaki, Tynion, Taylor, Cloonan, and Williamson’s works really help give a sense of a living and breathing world that our favorite characters swing through.

Thoughts: Some may disagree here – there’s obviously a lot of mileage to be gotten from a, dare we say, a “black and white” approach to Batman. I think that Tynion and Jorge Jimenez pushed a bit too far into the overdesigned and clashing colors, most obviously in the Designer, but also a bit with Ghost-Maker and the Gardener, who tend not to stick in the mind as much because they just have too many details.

Thoughts: Tynion hinted at the amazing ideas he had for the utility belt in the first arc of his Detective Comics run, when the Colony examines Batman’s belt and is amazed, and it would have been fun to have more scenes like that. This also reminds me of the amazing CAD drawings done for Tim Drake’s design as Robin when Chuck Dixon took over the character in the early 90s – that kind of detail, while not “realistic,” builds connection to the characters. And it’s also great for toys!

Thoughts: Tom King has also remarked that he’s tended to write Marvel-type stories – about characters who grow and change, rather than about archetypes – in the DC Universe, and it’s interesting that a writer as different as Tynion would say something so similar. And we’ll come back in 2027 and see where Jim Gordon and Alfred Pennyworth are. We’ll probably have at least one reboot in that time period, I’m putting my money on 2026, five years from Infinite Frontier, which isn’t a reboot, but served a similar function in terms of rebranding and relaunching nearly all titles at the same time.

Thoughts: It’s interesting that even as Tynion leaves, we have a Zatanna story in Urban Legends, a Lex Luthor story in the main Batman title – we’ll see how much that works. The description of the Bat-Family as “a bunch of street ninjas” is also quite hilarious and true.

Thoughts: DC has been hinting at doing more with Green Arrow in the past year, but so far, they have not pulled the trigger. My guess is that they don’t have a writer with a strong enough vision and don’t feel confident enough to do it without something like that. There’s been a lot of speculation for the past three to five years that smaller characters won’t be able to sustain titles – and while I think that’s wrong-headed thinking, if it gains traction, which it definitely seems to be doing, it’s a self-fulfilling prophecy. But Aquaman is getting another book, even if they seem to be doing that in perhaps the dumbest way possible. Green Arrow could get one too!

Thoughts: Tynion joins a long tradition, including Chuck Dixon and Alan Moore, in saying this. It’s a bit…odd to hear Tynion give this type of advice to future Batman writers since he spent 2014-2018 trying hard to bring back the past, but given the fact that the n52 brutally erased so much of what he was trying to bring back, it’s understandable. If those things had been allowed to live and thrive instead of being erased, perhaps Tynion would have come to this position sooner. I don’t know how I feel about it – I think I much prefer Tynion’s Detective Comics run to his Batman run, despite how much I’ve enjoyed his time in the driver’s seat – but I’d be curious to know if he feels that his Batman run is much better than his Detective run. Only time will tell.

Anyways… These have been my Bat-Thoughts.

Thoughts: And thank you for sharing them, James Tynion. Your Batman run has been an absolute pleasure to read and cover for the site and the TBU Comic Podcast, and I will miss you so intensely. All the best!

And we’ve come to the end! While we’ll still write some new columns for “Inside Batman” if, say, Joshua Williamson, or any of the other Bat-writers, drop some really key insights into their creative process or behind the scenes information (Mariko Tamaki, email us!), this will round off our efforts on this column for the moment. It’s been a real blast getting a chance to look at “Inside Batman” with James Tynion, Chuck Dixon, Scott Snyder, and the many other writers who have posted their thoughts on their time writing the Caped Crusader, and we hope you’ve enjoyed the information and our commentary.