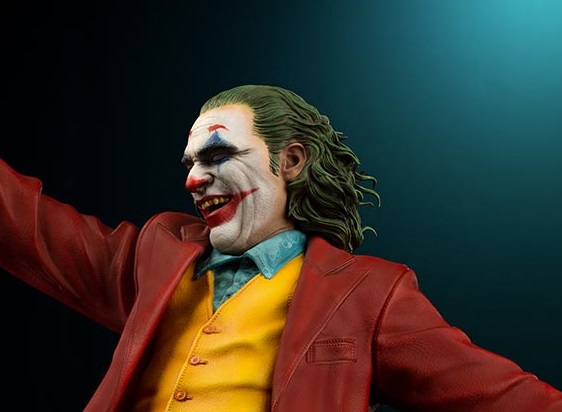 Iron Studios has released details for their latest one-third scale statue, which features Joaquin Pheonix as the Joker. The statue measures about thirty inches tall and includes two sets of interchangeable arms. It is priced starting at $1100 and is expected to release the end of June 2021. You can preorder the statue either directly at Iron Studios or at Sideshow Collectibles.

The renowned Joker, by Joaquin Phoenix, wins his statue by Iron Studios!

With open arms and closed eyes, with his long green hair dyed and an introspective smile on his made-up face, a psychedelic figure dances down the steps of a polluted city of Gotham, wearing a flashy burgundy suit, with a yellow vest and a green printed shirt. In this way, Iron Studios proudly presents its “The Joker Prime Scale 1/3 – Joker” statue, featuring DC’s most insane villain in his latest film version. On a base in the form of a stone staircase, with a metal handrail to its right, the figure of the murderous clown, as described on the dirty and worn sheet of paper from the Gotham Examiner tabloid, which adorns the back of the base, poses as in a frantic dance stomping and kicking puddles, emulating a distorted version of Gene Kelly, from the classic “Singin ‘in the Rain”, in a scenario inspired by the punctual scene of the film that symbolizes his fall and total transformation into Joker, the Prince Clown do Crime, filmed in a real New York location that became a tourist spot. The figure also has two pairs of interchangeable arms to change its pose.

In the plot, in the early 1980s, in the dark and chaotic city of Gotham, the failed clown Arthur Fleck dreams of success as a stand-up comedian. Treated as an outcast by society, and with a mental illness that makes him laugh involuntarily, with a life full of abuse and humiliation, lead Arthur to fall into total madness, assuming the name Joker, a nickname given by a TV host without scruples, becoming the craziest and most unpredictable criminal in town. The film chronicles a different origin of the villain in the comics, in a more credible way, this award-winning psychological thriller was one of the biggest successes of cinema in 2019, thanks to the masterful performance of Oscar winner Joaquin Phoenix for his interpretation, and the precise direction by Todd Phillips.