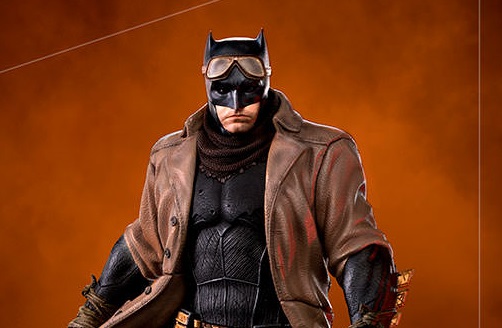 Iron Studios has released details for their latest Legacy Replica statue which features the Knightmare version of Batman based on his appearance from Zack Snyder’s Justice League. The one-fourth scale statue measures just under twenty-three inches tall and features hand-painted polystone. While similar in nature, this is not the same as the previously announced Art Scale statue. The statue is priced starting at $999.99 and is expected to ship between January and March 2023. You can preorder the statue directly from Iron Studios or from Sideshow Collectibles.

In a caustic and unusual habitat, the relentless and determinate Dark Knight searches for a way to defeat the forces of a conqueror tyrant from a distant world, that together with the corrupted Man of Steel, transformed the full of life Earth in a devasted desert. Cautious and exhausted by the years of combat, he still maintains determinate, climbing a pedestal made of mud, debris and corroded metal rebars, and the rests of a vehicle in the shape of a wheel with tire, he remains imposing, wearing a khaki overcoat with tactic military trousers over his original costume, and a pair of combat glasses over his mask to protect his eyes from the sandstorms of this desert world, he takes the leader position of a rebel team. In great scale, Iron Studios bring the statue “Batman Nightmare – Zack Snyder\’s Justice League – Legacy Replica 1/4\”, inspired by the parallel plot of a possible future, presented in the Justice League movie, in the Zack Snyder’s version better known as Snyder’s Cut.

When the cruel cosmic conqueror Darkseid caused the death of the journalist Lois Lane, the beloved wife of Superman, the Man of Steel became susceptible to the Anti-Life Equation, a transcendental formula that eradicates the free will, making the kryptonian, once Earth’s greatest hero, become a tyrant ruler ally to the Apokolips’ forces and creating a catastrophic apocalyptic future. After terraforming the planet with the power of the Mother Boxes, Darkseid left Earth to be ruled by a merciless and totalitarian regime commanded by Superman. In this tragic scenery, Batman gather survivor allies to form a rebel force called the Insurgency, to wage war against Superman and his cruel dominating troops. Seeking to stop such disastrous future of becoming reality, the runner hero Flash uses his Cosmic Treadmill and the calculations of his friend Cyborg to go back in time and alert Bruce Wayne of the dangers of Darkseid and of this tragic end for humanity, reiterating the Dark Knight’s objective of gathering powerful heroes in an alliance that resulted in the creation of the Justice League, that managed to fight off the invader forces led by Darkseid’s general known as Steppenwolf, fact that may or may not have stopped this terrible future’s fulfillment.

Played by actor Ben Affleck, after the pre-reveal of Superman Black Suit in the Inside Iron Studios: Second Edition, this is the new statue from the Legacy Replica 1/4 line by Iron Studios from the DC’s cinematographic universe. Batman Nightmare from the Legacy Replica 1/4 line by Iron Studios is already available for Pre-Order and is part of the collection that has other future statues’ releases such as “Aquaman – Zack Snyder\’s Justice League\”, \”Mera – Zack Snyder\’s Justice League\”, \”Superman Black Suit\”, \”Darkseid\”, \”Knightmare Batman\”, \”Wonder Woman\” and \”Steppenwolf\” in the BDS Art Scale 1/10 line, and the stylized versions \”Superman Black\” and \”Batman Knightmare\” MiniCo, all available for Pre-Order, the collection’s future news are yet to be revealed. Check out more news soon on Iron Studios’ YouTube channel and social media.