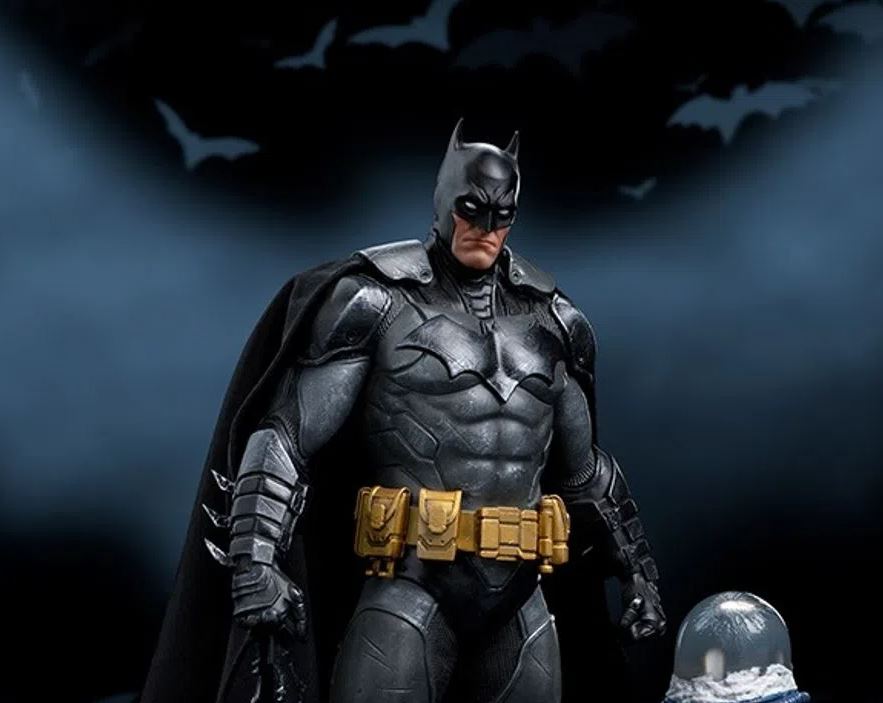 Iron Studios has released details for their latest deluxe statue called Batman Unleashed, which features Batman standing on a metallic platform with an industrial floor. The one-tenth-scale statue measures over nine inches tall and also features Mr. Freeze’s broken helmet. It is priced starting at $200 and is expected to ship in September 2023. You can preorder the statue directly from Iron Studios or from Entertainment Earth or Sideshow Collectibles.

Over rocks and stalagmites from his underground lair, on the base of a metallic platform with an industrial floor, the Dark Knight watches closely next to a display flaring the dome-shape icy helmet from one of his great enemies, as another trophy of his victories on his endless crime-fighting crusade. Wearing his gray and black body armor, composed of Kevlar and metal elements, besides many technological devices like night vision, gas filters, and others that allow him to protect himself and optimize his fighting skills, he wields two Batarangs with blades between the fingers of his right hand ready to be used as shuriken stars. Imposing and filled with thorough details, with his back covered by his outstanding black cape made in fabric, created with extreme attention, with strict and accurate care to achieve maximum prominence in your collection, Iron Studios proudly present their statue “Batman Unleashed Deluxe – DC Comics – Art Scale 1/10”, that takes the 1/10 scale to a new excellency standard for a figure in this proportion.

As a child, Bruce Wayne saw his parents brutally murdered on Crime Alley in Gotham City. Traumatized by their deaths, he dedicated his life to becoming the world’s greatest weapon against crime – Batman! To become the ultimate vigilante, the Dark Knight disciplined his mind and body to achieve the apex of mental and physical superiority in his relentless pursuit of justice. Created by Bob Kane and Bill Finger in 1939, Batman doesn’t have any superhuman powers, using only his intellect, investigative skills, technology, and a well-prepared physique in his crusade against the most dangerous and insane villains of Gotham.