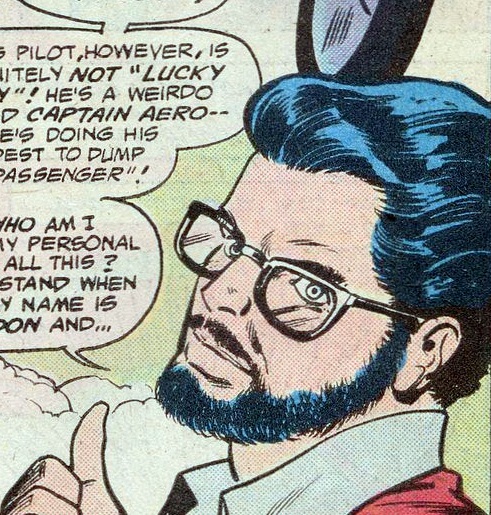 Most Batman fans know about Commissioner Gordon’s daughter Barbara. While not as famous as his sister, the sociopath villain James Jr. is also a prominent character in the Batman chronology. But did you know that James Gordon had a third child? One who predated Barbara and James Jr.?

Tony Gordon is the Chuck Cunningham of the Gordon family. If you don’t know who that is, look him up. He’s James Gordon’s forgotten child.

Tony made his first appearance, along with the then unnamed Barbara Kean-Gordon, in World’s Finest #53 from 1951. The early Batman comics rarely had Gordon do anything more than give Batman exposition at the police station. We never had a reason to explore Gordon’s home life until that this very peculiar story.

I kind of dig the biography we get on Gordon here. Baby Gordon is the cutest thing ever. It’s hard to believe he’ll grow up to become the scoundral rogue Ben McKenzie. Young Jim looks like Chief O’Hara and Barbara Kean (who wouldn’t be named for another few decades) looks like Blondie. An old enemy of Gordon’s has targeted him for death. Batman and Robin put him into hiding and have Batman masquerade as Jim. For no explicable reason they don’t let Gordon’s family in on the plan. So Batman must fake being Jim to his son and wife. “Martha,” WHY DID YOU SAY THAT NAME?! Now that the easy joke is out of the way..

It’s funny that Tony wears a Jimmy Olsen-esque bowtie…waitaminutewaitaminute….did I just read that Jim Gordon gets full body rubdowns from his son nightly? What the heck! The Gordon household is odd! I’m still reeling from the fact that Jim gets felt up by his teenage son every night. Panel 2: “The boy suspects nothing.” And the World’s Greatest Detective is oblivious.

Panel 3: …..did Batman have Gordon strip down so he could examine every inch of his body before they did this charade?

Panel 4: This sets up the classic sitcom scenario of “I have to be in two places at once.” This kind of stuff is the reason why Frank Miller felt the need to revamp Batman in “The Dark Knight Returns.”

Gordon eventually returns to his family (and his nightly grope sessions with his son). Tony is next mentioned in 1952’s Batman #71. It’s also worth noting that this version of Gordon lives in a mansion and has a manservant named Finley. Decades later, the show “Gotham” would premiere and Gordon would become a homeless cop who sleeps in cars and locker rooms. I guess sleeping in a car isn’t so bad if you don’t have to worry about your son giving you daily rubdowns.  Gordon thinks he’s discovered Batman’s secret identity (he hasn’t), and the next morning Barbara reacts.

This sequence reveals that Tony Gordon is away at college. I dig the roaring fireplace Gordon has. As I said before, Ben McKenzie would be very jealous.

This is our last mention of Tony for a long time. When Barbara Gordon/Batgirl debuts in 1967, no mention is made of the forgotten members of Gordon’s family.

After decades of absence, Tony Gordon finally returned in Batman Family #12. The year was 1977. It’s now been ten years since Barbara Gordon made her first appearance and the narrative is finally revealing what became of her brother. The Batman Family title had a reputation for bringing back obscure elements from Batman’s history. Dig his new look? The framing sequence for the story is a letter he is writing Babs. We find out where he’s been all these years… It turns out he’s an international spy. He was captured by the enemy but escaped. He couldn’t let his family know he was alive (or his spy activities) or it would create an international incident. He does stumble into a Batgirl adventure and immediately recognizes his sister under the mask. He avoids being spotted by her until the final panels of the story. The story ends with him burning the letter instead of sending it. Now that Tony was remembered, DC wasted no time using him a few months later. A younger version of him and his sister Barbara were seen in Adventure Comics #453. Tony was an overbearing older brother in a story where a young Barbara got super powers for a brief period. Superboy shows up and the end of the story reveals the who these kids really are. Once Batman Family merged with Detective Comics, the Batgirl feature eventually got around to addressing the fate of Tony Gordon. Detective Comics #482 was published in 1979. Barbara Gordon is being held prisoner in China. Her captors are involved in some weird plot involving super suits and calling themselves “Sino-Supermen”. Tony learns of her capture and decides to defy orders and rescue her. Tony looks ridiculous in that outfit. I’m glad he’s confident enough to show off his legs though. We all know the rules in comics; ‘no body = no death’. While it’s possible Tony survived (especially wearing the supersuit), no writer ever followed up by bringing him back. So I suppose Tony did the whole “dying in an explosion” trick before Jason Todd made it cool.

DC did use the Earth-Two version of Tony (and his mother Barbara) as wedding guests for Bruce Wayne and Selina Kyle’s Earth-Two nuptials. This was 1981 and Tony has not been seen since. Once Crisis happened, the Gordon family tree became a bit more complicated. We saw a younger James and Barbara Sr. give birth to a baby named James. Barbara’s parentage has shifted a few times and there didn’t seem to be any room for poor Tony. With James Jr. and Batgirl, who needed another Gordon child? Who even remembered him?

With Rebirth and the recent continuity changes, who knows? A third Gordon child could be a fun addition and way to throw the Gordon family dynamic for a loop. You could even play up the spy angle and put him in Spyral. I’d like to see Tony Gordon return, just as long as he lays off the full body rubs.