Review: Red Hood and the Outlaws #8 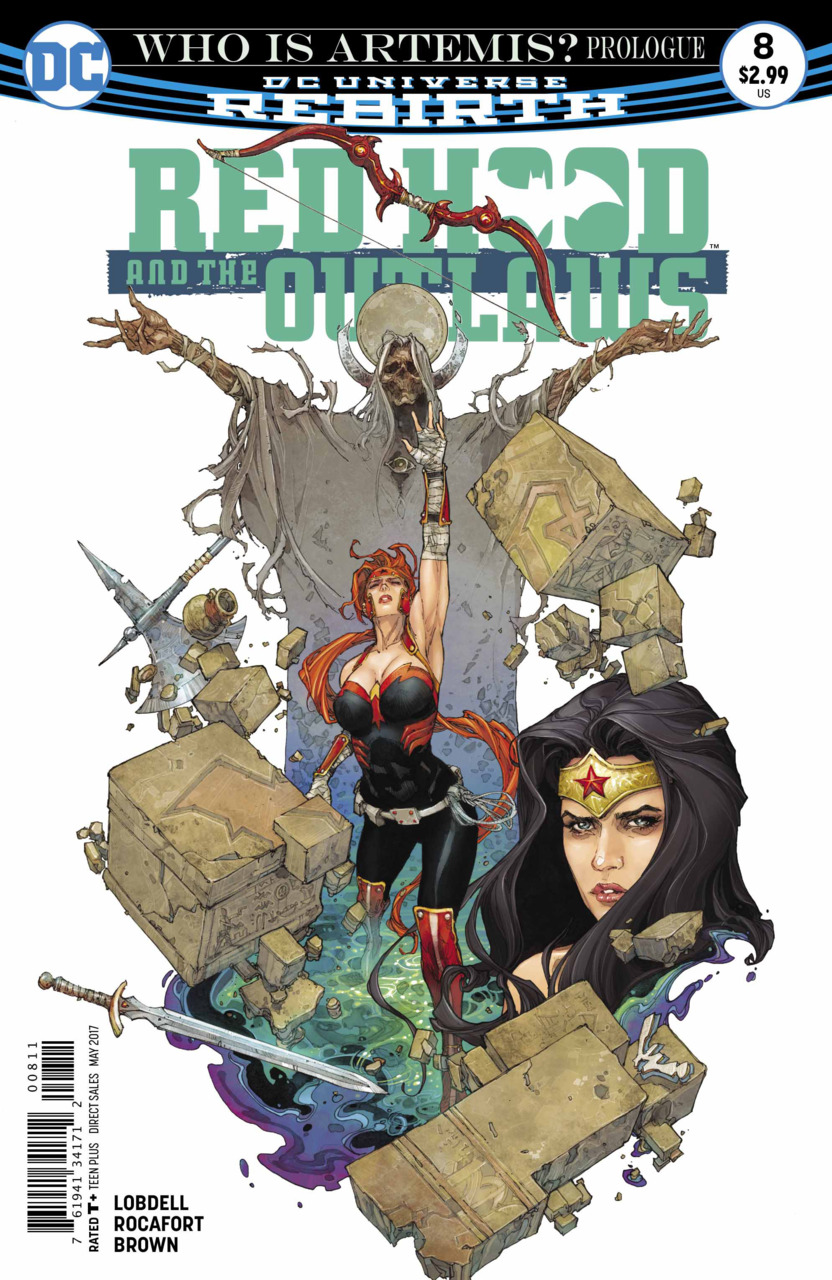 Synopsis: Opening in a bar in Gotham, Red Hood is attempting to get some information from the bartender regarding a Mr. Stirk. Frustrated with the bartender’s lack of cooperation, Artemis smashes a beer glass over his head and starts a brawl in the whole bar. As the pair begin to take on all the occupants of the bar, Artemis sees a woman who claims to have risen from the dead. Red Hood knocks her over the head and reveals the Amazonian woman to actually be the shape-shifting Mr. Stirk they have been looking for all along.

As they apprehend the criminal, Red Hood points out that Stirk took on a form that would clearly “rattle” Artemis. Despite not wanting to talk about it, Jason points out that, since they are a team, she needs to disclose any information that could potentially put the team at risk. While downing a couple of drinks, Artemis recounts her life on Bana-Mighdall and her best friend Akila. They both were training to be the next Shim’Tar or guardian of their home. Despite Akila’s skepticism and cynicism towards the gods and the role of the Shim’Tar, she was chosen by the gods to be the protector of their home. Artemis, upset by her lack of a role in their community, lived just outside their city in peace.

One night, she saw fire and realized the neighboring country of Qurac had finally fulfilled its years long campaign to break through the magical barriers into Bana-Mighdall. Unfortunately for the soldiers and even the people within the city, Akila had destroyed most of them and the city itself. Once Artemis had come to accept this and the fact her friend was already gone, she joined forces with Wonder Woman to take down her friend, permanently.

Finishing their last drink and her story, Artemis explains that the Bow of Ra used by Akila was lost during the battle and she intends to find it. Jason agrees to help even though he feels that she is walking down a path that will only result in her repeating her same mistakes.

Thoughts: With another chapter starting in this series and the focus being on Red Hood and Artemis, I feel confident that the creative team is off to the right start. The combination of humor blended with Artemis’ tragic backstory keeps you emotionally on your toes. This has become a staple of this series since Rebirth and Lobdell’s concentration on relationship building between the Outlaws. Although the artwork has room for improvement, I think the tone was captured in this issue.

Regarding the artwork, Rocafort and Brown delivered some fantastic imagery incorporating many different vantage points for the reader to see the action in particular. During the bar scene when Artemis and Red Hood are wrecking shop, I really enjoyed how their attention to detail showed Red Hood fighting other criminals off to the side while Artemis took care of business elsewhere. It helped to show scope to the scene and was just fun to see. My one complaint of the artwork would be the depiction of Jason’s helmet. I am not a fan of the mouth line and think it makes helmet more of a “mask” rather than something tactical which is what Red Hood would actually be utilizing.

Lobdell uses this issue to finally dig into Artemis’ character and her backstory. Although I’ll admit not being into this as much as Red Hood and Bizarro’s relationship, I really did enjoy the more fun camaraderie that Artemis and Jason seem to share through combat.

Overall, this Bow of Ra storyline does not really seem too exciting, but I’m looking forward to seeing this last piece of the Outlaws group come together.

The Contested Sexuality of Batman Part One: Batman’s...