Review: Red Hood and the Outlaws #9 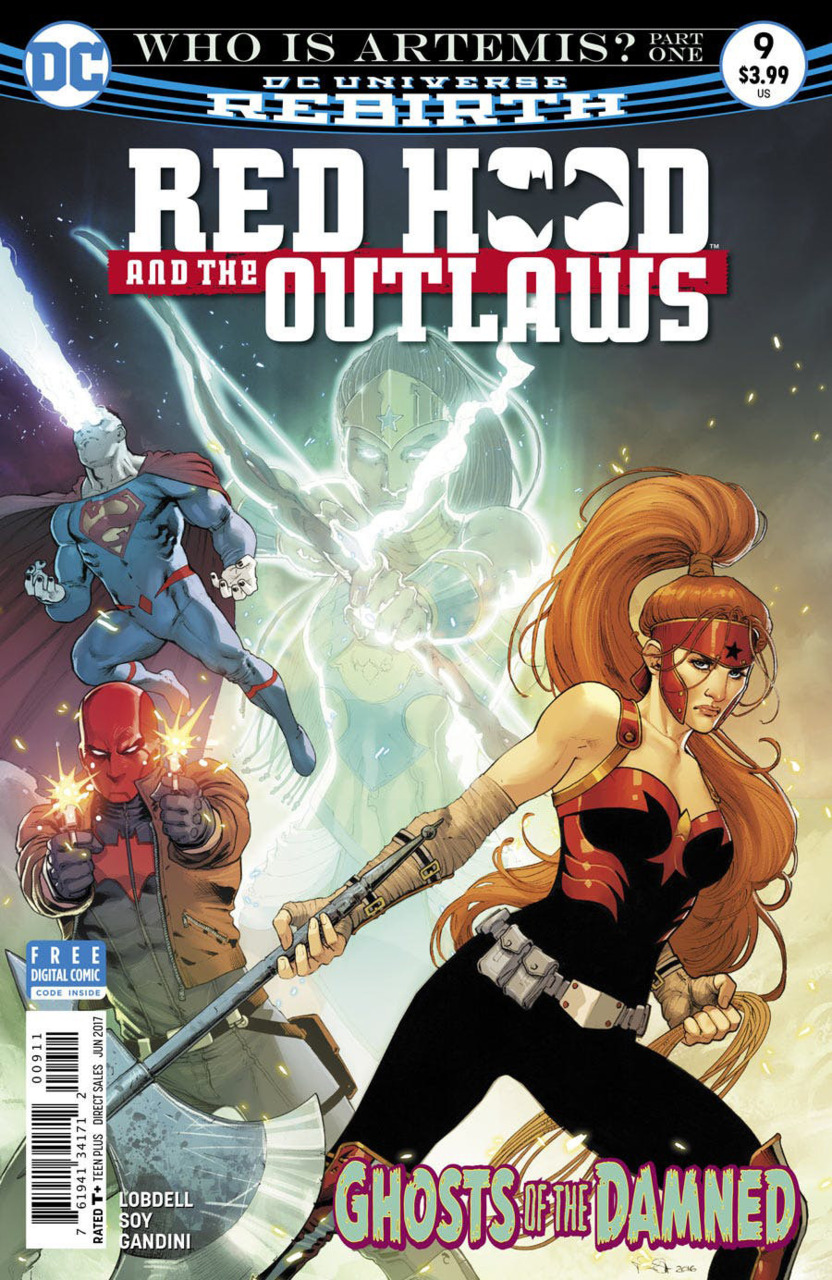 Synopsis: Flying into Qurac with the help of Bizarro, the Outlaws are on their way to investigate a deadly explosion in one of the country’s cities. Coincidentally, the city happened to house the directed opposition to the head of the military of Qurac, General Ahmed Heinle. While listening to the news broadcast detailing the political uproar around General Ahmed’s unidentified weapon of mass destruction, a horrified Artemis announces to Red Hood that the weapon is none other than the Bow of Ra.

The question still remains, however, as to whom could be wielding it as the only user can be a Shim’Tar. Currently, the only Shim’Tar is Artemis and she reminds Jason that she was forced to kill the last Shim’Tar, her best friend Akila, after she had become unstable with the bow’s power. Just as Jason is about to comfort Artemis, General Ahmed Heinle hails their plane and orders them to turn back or he will shoot them down. Red Hood lets the general know, in not so subtle terms, that his team is on its way to kick his ass for what he’s done.

Suddenly, the Qurac military fires on their hijacked plane and Bizarro takes the full brunt of the explosion. Enraged, he turns his attention to the fighter jets and their pilots. To Jason’s surprise, Bizarro doesn’t use any lethal force which proves to Jason that the team is having a positive effect on him. Before Red Hood and Artemis crash into the ground, Bizarro rescues them. The rescue is short-lived as a blinding white light engulfs the team.

Waking up alone encased in ice, Jason suits up and finds that their planet crashed but Bizarro protected them with his frost breath. It doesn’t take long before a group of soldiers locate him. Rather than fight them, he allows himself to be captured so that he can get closer to their leader. Meanwhile, Bizarro finds himself among a crowd of refugees who are in need of someone to save them. Bizarro agrees to take them to Red Hood and see what they can do to help the displaced citizens of Qurac.

In a prison elsewhere, Jason realizes that he is being held next door to the complex where the Joker murdered him. Sensing a set up again, he tells his captors to go get the Joker or the General and that he is ready for them. As they walk out they call him nuts and that he isn’t what he thinks. After leaving, Jason appears to speak to his younger self who questions what he has become.

The issue ends with Artemis finding herself tied up in an underground lair. She is shocked to discover her captor is her best friend Akila. Akila tells Artemis that they are finally together and they can save the world now.

Thoughts: After last issue’s background story into Artemis, this was a great buildup to the eventual confrontation we will see with her “dead” friend Akila. Both Lobdell’s story and script coupled with Soy’s returning pencils makes this a fantastic issue to read.

Regarding the artwork, Soy and Gandini create the atmosphere in which Lobdell is able to fill with his great script. Soy’s heavy line work with each character only helps to give each one more expression and depth. You can really feel Jason’s anger towards being near where he was killed by the Joker and Artemis’ shock at the revelation that Akila is alive.

So many images in this series thus far has stuck with me and this issue did the same only with a less hopeful tone. We get to see Jason confront the Robin he once was (either through delusions or some hallucinogen) and Artemis strung upside down in some dungeon. Both are powerful panels and help to drive the impact of the scene that much more.

As a side note about character detail, I still continue to love how Soy depicts Bizarro. More often than not, Bizarro is depicted as this grotesque and misshapen beast. Here, Soy shows that he is indeed different from the Man of Steel we all know. However, he is a true mirror reflection of Superman and bears many resemblances to the original, if just slightly “off”. The scene where he is confronted by the refugees is a very touching scene where Soy shows through Bizarro’s body language and facial expressions that Bizarro does have what it takes to be like Superman. He thinks only of helping others and his commitment to his friends.

The artwork was great and Lobdell’s writing and story telling helps to give that artwork the real impact it deserves. This issue truly felt like a cohesive team book. Lobdell has had a lot of the story, thus far, to focus on Jason which has helped to build other characters around. Now, we see the story start to shine a light on each character. We see him even play at this with Jason saying that “this isn’t my story, not entirely”. The humor and witty banter between the group really has Lobdell’s Dark Trinity finding traction. He continues to build a strong title and deliver on both action and emotional character arcs.