Review: Red Hood and the Outlaws #10 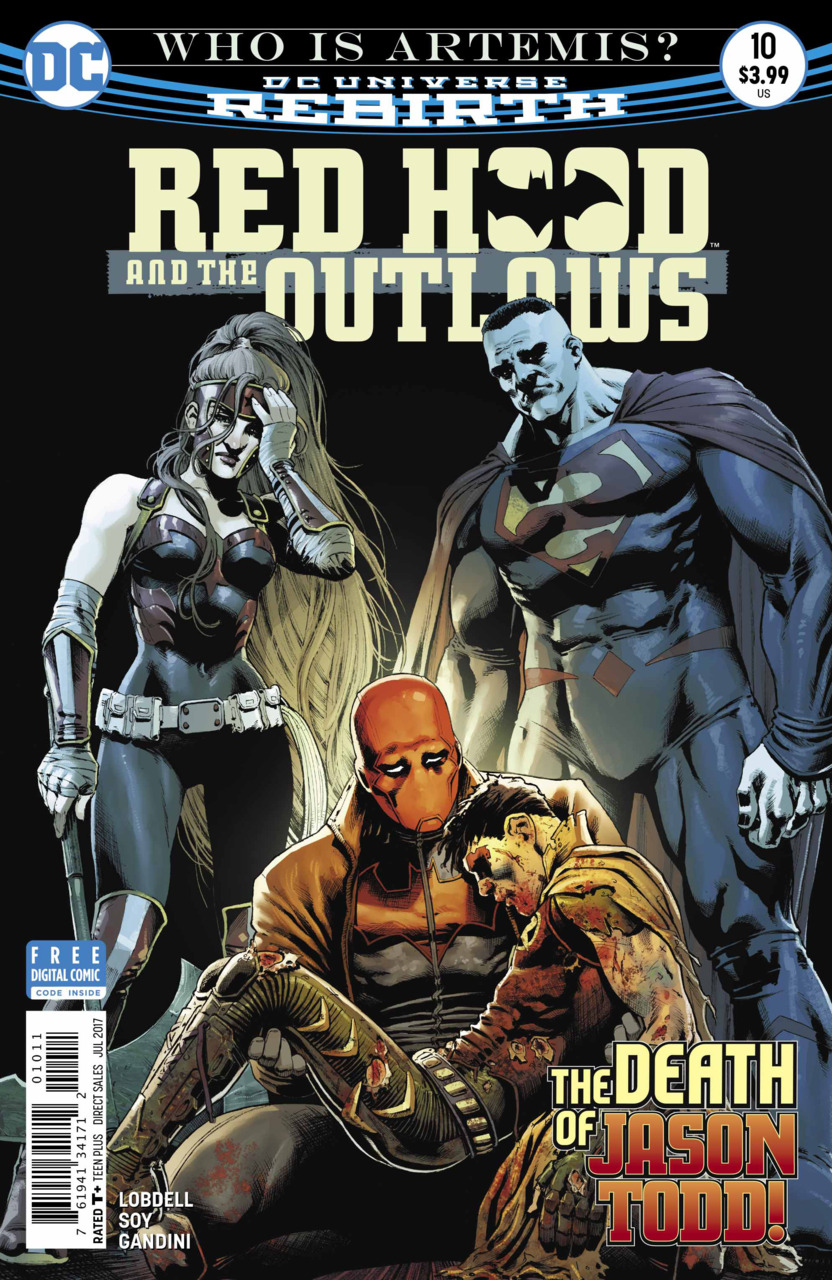 Overview: As each member of the Outlaws deals with their own personal issues and side stories, Jason discovers that Artemis’ people are behind the destruction caused by the Bow of Ra.

Synopsis (spoilers ahead): Toasting to room full of Amazonian sisters, Artemis is welcomed back into the fold by the-once-dead Akila. Her sisters talk of an offensive move against the General Ahmed, the new dictator of the nation of Qurac. Overwhelmed by seeing her dead friend alive again, Artemis excuses herself from the dining hall to gaze upon the resurrected lost city of her Amazonian sisters. Akila soon joins her and apologizes for capturing her but states she had to to explain herself.

Back in the Qurac prison, Jason beings to grapple with his own sanity as he faces himself as a dying Robin at the hands of a phantom Joker. Forced to relive the worst moments of his self proclaimed “short life” with no change in the outcome no matter how many times he imagines himself stepping in to save Robin, Jason begins to sink deeper into despair.

While the the two other Outlaws face their inner demons, Bizarro is still leading the recently evicted refugees from the destroyed village back to his friends. Bizarro tells them that he is not as smart as his friends and they will know what to do to help. The group soon finds a mountain blocking their escape to which a few turn on Bizarro as a result. Suddenly the refugees are attacked by one of the General’s helicopters. Bizarro makes short work of the helicopter and announces to his critics that he is not stupid and that if the mountain is in their way…he will move it.

Back in Bana-Mighdall, Akila begins to lay out her plan to Artemis and that her sisters will help her take back the Bow of Ra from the General. Artemis asks again to know how Akila was resurrected. She recounts the story about how the General acquired the Bow but learned that only a Shim’Tar could properly control it. Now that they are together again, Akila asks for Artemis’ help this time to use it together to bring their sisters into the world and out of hiding. With the appearance of her battle axe, Artemis is convinced this is the right path and agrees to join Akila.

Back in prison, Jason comes to the revelation that he has to finally let go of the terrible memory of his murder and let the past be the past. He admits that he always did things alone when he was younger and that’s why he died alone as well. As he walks away from seeing Robin murdered again, he realizes that he has been hallucinating while being under constant torture by the General himself. After freeing himself and threatening to kill the General, Jason learns the truth from the General…the Bow of Ra is in the possession of Akila who intends to rule the world and burn anyone who gets in her way.

Thoughts: Although the overall plot of this arc is not very engaging, the individual characters’ storylines continue to remain very compelling. Lobdell shows that he really understands each of these characters.

Each one of them has flaws and Lobdell continues to deliver intense scenes in which we see them, both in small or big ways, overcome these shortcomings. Being that Red Hood is, in my opinion, one of the most compelling characters of The Batman Universe, I loved how dark Lobdell took his revelation and made it finally clear to Jason how to get past the most traumatic and haunting moment of his life.

In contrast to this intensely dark scene with Red Hood, we have a lighter moment with Bizarro talking back to some refugees who question his intelligence. Bizarro proves that there is more than one type of “smart” as he literally thinks “through” the problem and decides to move a mountain that is in their way. This was so great to see because his broad strokes approach may seem unorthodox, but we get to see an important moment for Bizarro as he thinks independently without the direction of the other “Reds” to solve a problem.

Bringing all of this great story points across to readers is Soy’s artwork. He does such a great job on this title, whether he is drawing a bombastic action scene with Bizarro punching a mountain or Jason watching the horrific murder of his younger self. I especially like how he is drawing this alternate Amazonian society set in the world of the Egyptian gods rather than the Greek ones on Themyscira. The Egyptian aesthetic is felt by the architectural and clothing style that Soy brings to these panels.

Overall, a great issue and it stays in line with the tone of the title since Rebirth. Ever expanding in its character development and incredible detail from the art team, this title remains at the top of my list of Rebirth books.