Review: Red Hood and the Outlaws #11 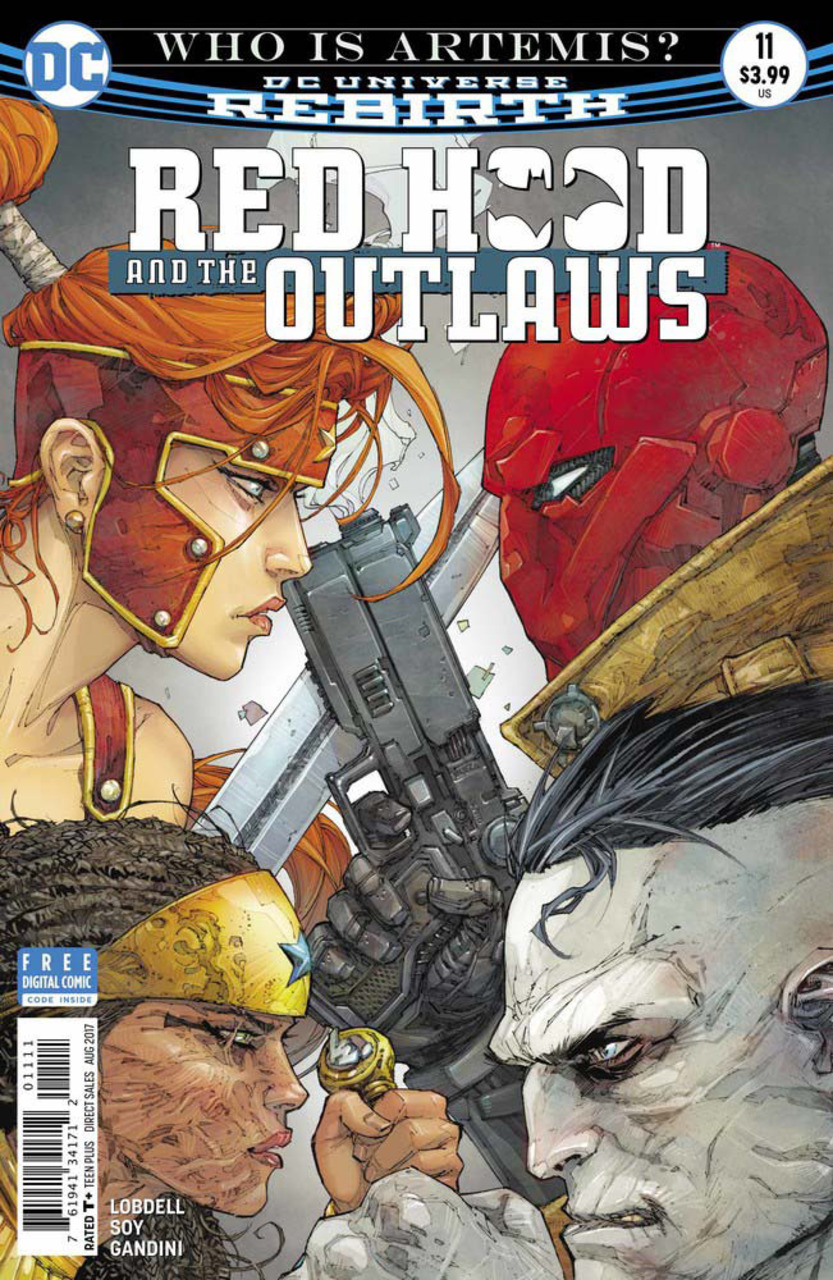 Overview: The battle for the Bow of Ra reaches its climax as Artemis finally gains control of the bow as its worthy wielder. Though the day is ultimately won and all seems well, Bizarro collapses from the battle after his heart stops beating.

Synopsis (spoilers ahead): While the Amazons from Bana-Mighdall begin the final battle against the military of Qurac, Red Hood begins to see that Artemis’ friend Akila is twisting the truth to get her sisters to destroy the men of Qurac. Artemis, still believing that her reborn sister is truly good again, interrogates General Heinle about his use of the Bow of Ra. He denies using the bow and Jason even points out that, had the General possessed it, he would have used it by now.

The questioning is cut short as Akila incinerates the general with the Bow of Ra. She orders everyone, military and refugee alike, to surrender to her will or perish in the fires of Ra. Seeing that she was deceived, Artemis realizes that she must destroy her friend yet again. Jason reassures her, from past experience, that people change after dying and coming back to life. As the two prepare to take on Akila, the mountain shudders and Bizarro bursts out with the remaining refugees of the destroyed city of K’kyeshi. Akila strikes Bizarro with increased strength. She then turns her attention to Artemis and sends a wave of fire at her and the refugees. Although stunned and knocked to her knees, Artemis and her battle ax are able to absorb the blow and defend the people.

Akila approaches to see her damage but is immediately struck by Red Hood and his magical “All Blades”. They were given to him shortly after his resurrection and feed off of magic. He cuts into Akila and appears to be gaining the upper hand. Enraged by his attack and lack of cooperation with her plan to “save” the world, Akila lands a blow that takes Jason down. Before she can land the final blow, Bizarro reappears and helps Red Hood to fight Akila. The pair are joined by Artemis who now possesses the Bow of Ra as its worthy wielder. Though it appears to happen off panel, the fight appears to end with Artemis firing multiple arrows and killing her sister.

After the battle, the refugees and Amazons take stock with what they have lost and realize that they must come together, both Qurac and Bana-Mighdall. Artemis thanks Jason for being there for her. The two share an intimate moment and express, though unspoken, feelings for each other. Jason asks if she’s going to leave the Outlaws, but she immediately says no. Their tender moment is lost, however, when Bizarro falls down and a small boy cries out that Bizarro’s heart has stopped.

Thoughts: Another story arc comes to a close and I can continue saying that Lobdell is nailing it with this series. Couple with a fantastic art team, this entire creative team delivers both great dialogue and fun action. This individual issue was mostly just action but, at its heart, it was the final step towards this team of outlaws coming together.

The art team, led by Dexter Soy, continues to deliver some of my favorite artwork here in Rebirth. Soy’s portrayal of the Dark Trinity’s physical movements gives insight into each characters individual characteristics. With just a few panels you can see that Red Hood is somewhat carefree, but ready for action with how he leans on the general or slides into action. Artemis shows off her power and grace by nimbly picking Jason up mid action to question him. While Bizarro always appears surprised the first time he gets hit by and enemy because it does not seem to be in his nature to strike first unprovoked.

On more of a “shipper note” (enjoy Stella!) I’m not sure how I feel about Red Hood and Artemis as a couple yet, but I did enjoy the moment the two shared when she rested her head on his shoulders. This, I felt, conveyed more than their meaningful gaze into each other’s eyes. They were both exhausted from battle and I thought that, with all her power, she felt comfortable enough to let her guard down and rest her head on Jason. This was very symbolic of both the growth that these two have had as teammates as well as a potential couple

Lobdell’s writing and story continues to keep me engaged. Artemis’ backstory and look into a different kind of Amazonian lifestyle and viewpoint was interesting and felt fresh. As I had said earlier, this issue was mostly action, but the overall story was fun and engaging. With a true cliffhanger at the end, I’m definitely looking forward to seeing next months’ issue.