Review: Red Hood and the Outlaws #12 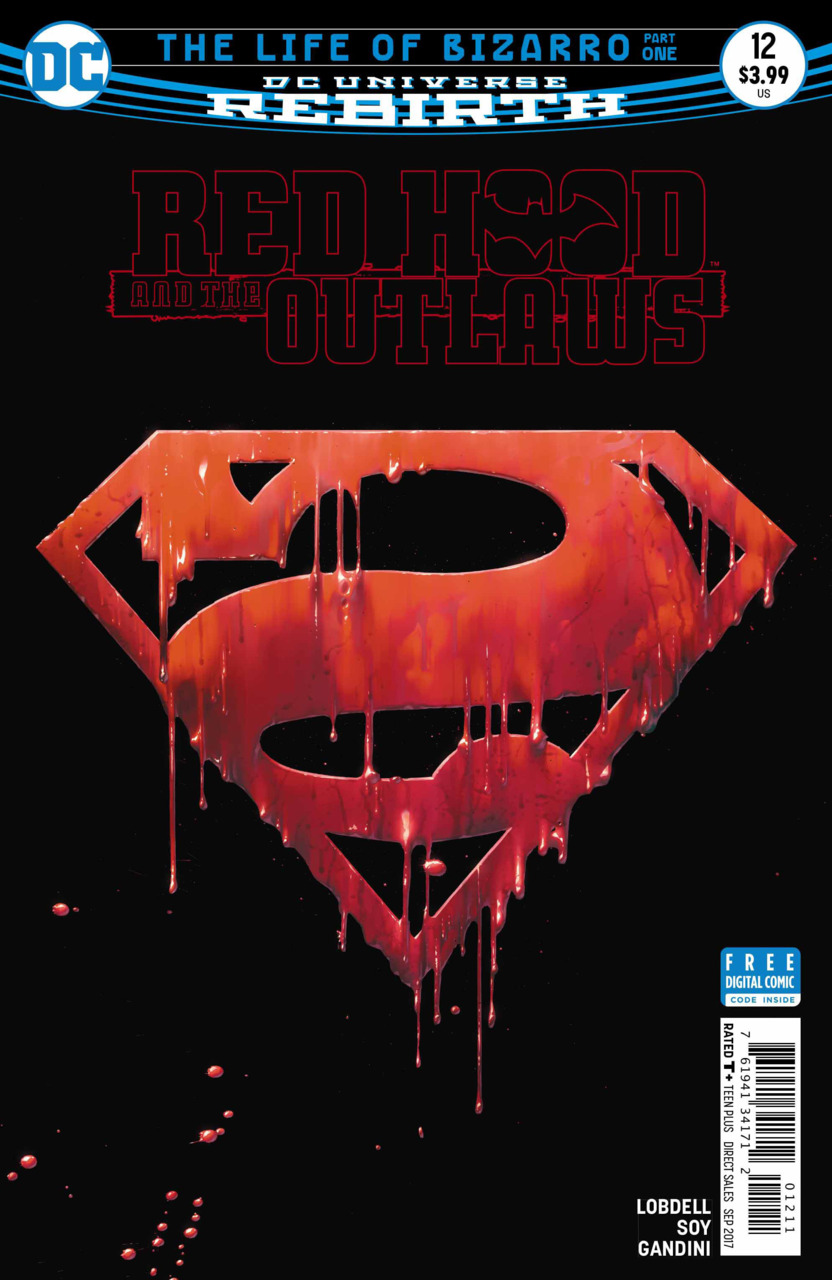 Overview: Still trying to cope with the fact that Bizarro is slowly dying, Red Hood and Artemis are called into action when someone releases Solomon Grundy out of prison to wreak havoc on Gotham.

Synopsis (spoilers ahead): Opening in a park on the outskirts of Gotham, a mysterious figure addresses Solomon Grundy and reminds him that he was broken out of Arkham to attack Gotham tonight. We see that the man is also following the recent exploits of the Outlaws.

At Ma Gunn’s Home for the Criminally Insane, the Outlaws take refuge while Bizarro is still out of commission following his fight with the Amazons. It does not take long for Ma Gunn to deliver her preliminary diagnosis…Bizarro is dying. Jason remembers that Black Mask had said that the Superman clones never lived long as the Kryptonian cells are almost impossible to duplicate. Even knowing his ultimate fate does not alleviate the pain the team is experiencing. The moment does not last long as a news channel announces the attack by Grundy on a nearby neighborhood fair.

Rushing to the fair, Artemis and Red Hood begin to battle the undead villain. Despite the element of surprise, the pair seem to be outmatched. Meanwhile at Ma Gunn’s, Bizarro wakes up while she is reading to him. He can hear his friends fighting for their lives and says he has to help. He knows that he is dying and Ma Gunn states that if he leaves, he will not be coming back alive. Bursting out the door in his uniform, Bizarro says that his friends are more important.

Arriving just in time to save their lives, Bizarro beings to battle Grundy. It becomes clear that the two are closely matched in power levels. Red Hood keeps trying to get Bizarro to stop fighting as it is only deteriorating his cells further. Only after using a new ability (“freeze fists”), Bizarro is able to beat Grundy into submission.

The day is won but the Outlaws’ concern becomes getting Bizarro back home. Bizarro replies that, being with his friends, he is home. As he takes his final breaths, Bizarro asks Jason and Artemis to take care of his Superman doll.

As the pair begin to mourn their fallen friend, they are stunned by a bolt of electricity. Floating down to the ground, Lex Luthor (Super-Lex) remarks how “intriguing” it is to find another Bizarro clone.

Thoughts: I never thought I’d see the end of an issue and be thankful to see Lex Luther looming over our heroes after zapping them out cold. There was a small part of me that thought they might reboot another Bizarro clone but I’m glad that, with the introduction of Luthor, we will be getting a reborn Bizarro instead. The Luthor/Bizarro relationship in Forever Evil was one of the highlights of that event, so the arrival of Luthor (much more heroic now than he was back in Forever Evil) seems to indicate we will be getting a continuation of that story to some degree.

The writing here was simple but still impactful. Lobdell delivered some quippy one liners from our two wisecracking “Reds” during the fight which added some levity to the situation. Then he flips everything on its head in the last few panels with the gut-wrenching dialogue between the Reds and a dying Bizarro. It seemed unlikely that they would kill off one of the main cast so early in this series but, then again, he is a clone and there could be another one just around the corner.

Artwork was on point again and Soy continues to complement the fantastic writing of Lobdell. He gives depth to these characters and continues to add memorable panels such as the dead Bizarro surrounded by his friends as well as the image of Red Hood holding Artemis as she cradles the Bizarro’s Superman doll.

As much as I liked this issue, I felt it could have been drawn out more. He just collapsed at the end of last issue so with him collapsing and dying at the end of this one, it felt a little rushed. The Death of Superman story drew out the Doomsday fight a little too long, in my opinion, so it would have been nice for them to have been able to meet somewhere in the middle for Bizarro’s death.

Despite this very minor gripe I had while reading, I really was moved by this issue. It is comics, so we know that no one ever stays dead, but its up to the creative team, both in writing and art, to make these deaths impactful. Lobdell and the art team succeeded in that here. Making a character’s return mean something is the next step following their death which I have no doubt the creative team will be up to the challenge.