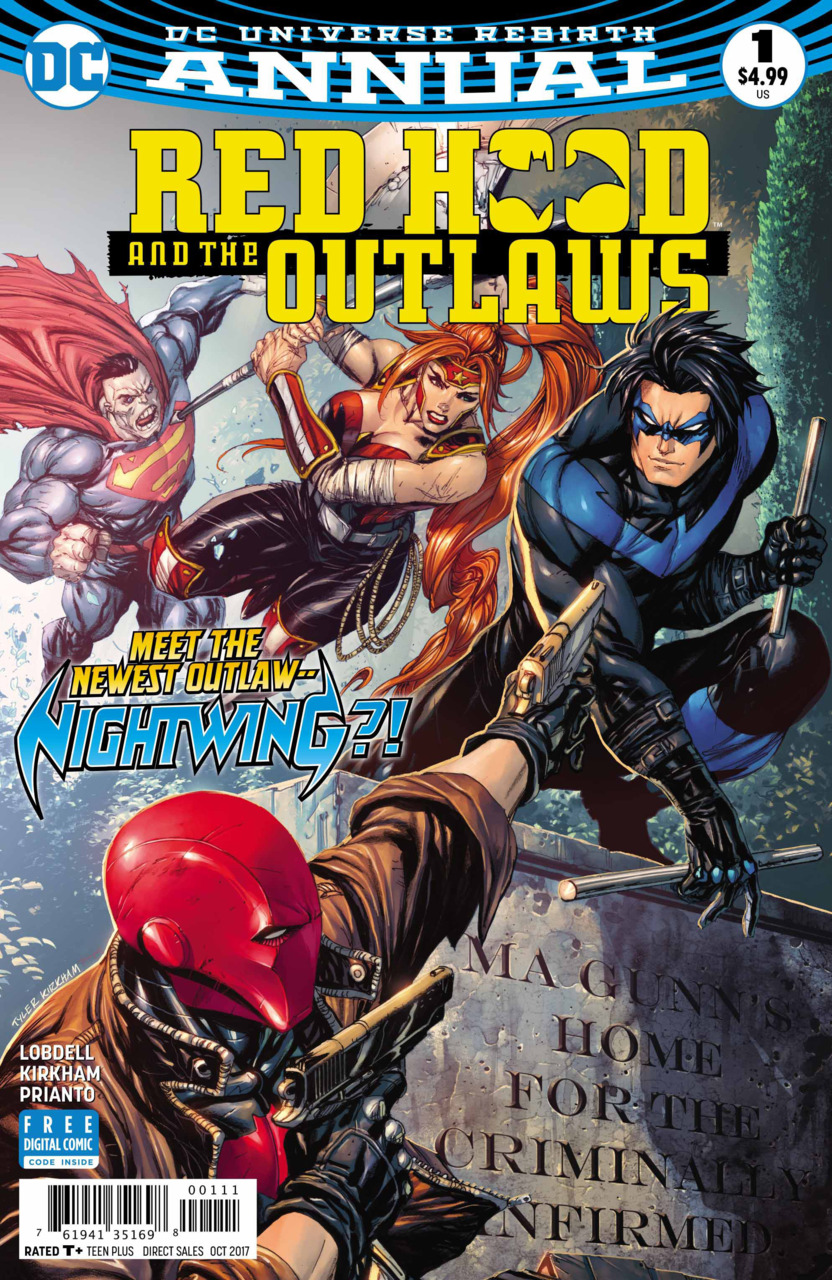 Overview: After joining a Russian circus as a traveling act, the Outlaws gain a new member in Nightwing to take on KG Beast. Although a short lived partnership, Jason and Dick are given a chance to reconnect in a very brotherly way.

Synopsis (spoilers ahead): Somewhere out in the Baltic Sea, a Russian gangster who had been humiliated by Red Hood months earlier sets course to meet with an old “friend” of his grandfather to help him gain revenge. Dropping the name “beast” in reference to this ally, the ship captain tells the gangster to turn around and that he will go no further. Just as the gangster attempts to reassure the captain, the boat is ripped part by gunfire and explosives. Each member of the crew including the captain is gunned down. KGBeast (now known as just “Beast”) appears and tells the gangster to start talking.

In Gotham, Dick Grayson is in the stands confused as he watches Jason and the rest of the Outlaws performing in the World Circus of Russia. After the show ends, Dick makes his way backstage to visit the Outlaws’ trailer. Once inside, Grayson is introduced to both Artemis and Bizarro and Jason reveals the reason why the Outlaws have infiltrated the circus was to keep an eye on the Russian gang he had once told to never return to Gotham. While struggling to find the words, Jason finally manages to ask Dick for help in identifying the shady characters within the circus and even provides him with a “subtle” costume as a clown.

Around the campfire, the group gets familiar with each other as well as some of their fellow “rubes”. While Bizarro has a romantic encounter with the ringmaster’s bearded daughter and Artemis gets Grayson to open up about his relationship with Jason, Jason is offered a job by the circus’ owner “off the books”.

Later, while Dick did his routine as the clown, the Outlaws went with the circus owner to a hole in the ground outside the big top. The owner tells them that the job is underwater within the hole and that the job is bigger than he had imagined. The team swims down and surfaces in an underground lair where they come face to face with KGBeast, who was hired to kill the Outlaws. The team struggles to take him down but are assisted by Nightwing, who shows up to lend a hand and defeat KGBeast.

After handing KGBeast and the armory he was hiding to the authorities, the group takes a minute to enjoy their victory. Dick tells Jason he is glad to see him being a better older brother to Bizarro than he was to Jason. He tells Jason to stay out of trouble, however futile that is, and leaps off the rooftop into the morning sun. The Outlaws then make their way home while Bizarro enthralls them with the details of his date with the bearded woman.

Analysis: For its first annual of this Rebirth, I feel that this was a bit of a step down from the past issues with the story and the art here. There were some great moments, specifically dealing with Dick and Jason’s relationship, that gave me some deeper insight to their characters. Unfortunately, we really did not get to see a deeper understanding of the actual Outlaws and their relationship.

The story itself for this annual felt very disjointed between the random circus infiltration coupled with a random Russian gangster hiring KGBeast. The Outlaws were “tricked” into swimming underwater for, literally, no reason as ordered by the circus owner. They were never told (unless I missed something) what the job was and why they had to swim underground to get it. That build up to the climax really left me irritated and confused. The circus itself did not have any inherent Russian characteristics so it felt somewhat forced that this Russian gang who hired KGBeast also owned a circus which led to the Outlaws needing help from Nightwing. I just wish the creative team had come up with a better reason to get Nightwing involved rather than throw in a circus element to the plot.

Artwork by Tyler Kirkham was lacking after what we’ve been seeing from Dexter Soy. Although capturing the lighter moments very nicely with softer line work to give characters an overall happier appearance, the characters were drawn younger or even less proportionate in the case of Bizarro. He was drawn in this annual looking like the Hulk or Solomon Grundy. Although he is very muscular, he still is just a clone of Superman so his features should not be that out of range. One nice standout was the lettering by Taylor Esposito. This definitely need to be on point with big settings like the circus and really made you hear the booming voice of the ring master. The artwork was not bad, by any means, just not where it has been under Soy.

Final Thoughts: Overall, the story itself had some exciting action moments with a few noteworthy, ‘quiet” moments surrounding Jason and Dick’s relationship. However, the annual did have some gaping plot holes with a few too many forced plot points. Obviously, this less-than-stellar annual does not take away my excitement for next month where we pick with an eloquent, reborn Bizarro.