Review: Red Hood and the Outlaws #14 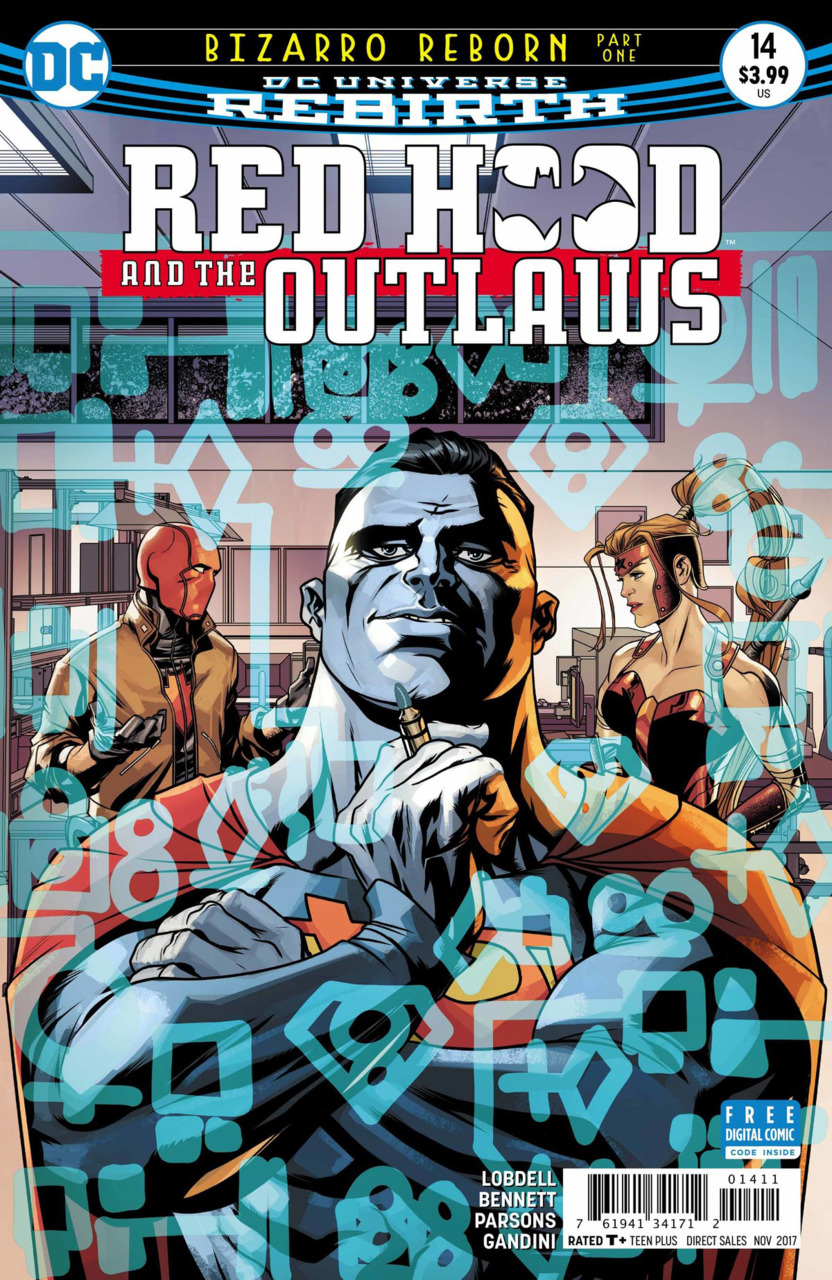 Overview: As the Outlaws adjust to the new benefits of a super smart Bizarro leading their team, Bizarro upgrades both their arsenal as well as headquarters. Whether or not this new Bizarro is around for good does not look certain as he sees his old self in the mirror at the end of the issue.

Synopsis (spoilers ahead): Opening in Gotham, Red Hood and Artemis, now outfitted with new tech, fly to stop a hijacked truck from being taken by the minions of Professor Pyg. The new tech, complements of a now-super-smart Bizarro, allows them to literally fly into the fray and save millions of Penguin’s dollars from being stolen. Of course, in true outlaw fashion, Jason also uses a new teleportation device to steal Penguin’s money right in front of him.

Back in the new headquarters for the Outlaws, Ma Gunn reveals to Bizarro that she had letters from Jason’s late father that she had withheld from Jason as a child so as to better control him. She appears remorseful, but Bizarro tells her that the team is busy cleaning up Gotham and Jason does not need the distraction yet.

Just as Jason and Artemis are about to enter the old headquarters near Crime Alley, they are beamed up to a brand-new, hovering headquarters that Bizarro created in the course of a day. The pair continue to be astonished by the heightened intelligence of Bizarro and all the new technology he is incorporating into the team. He gives them a full tour of the facility which also features wormhole-breaching doorways which allow them to enter secure locations such as the Batcave or the Fortress of Solitude. Soon they are called back to Gotham to stop a crime which Bizarro hints was already predicted by his new systems.

The team then stops Victor Zsasz and a guard who was pressured to letting the psychopath escape Arkham. Bizarro comforts the man and reassures him they will help the man’s sick son and speak to the judge for leniency on him. The Outlaws return to their floating fortress and decide to turn in for the night. After everyone has gone to bed, Bizarro goes to his control chair and looks into a mirror screen to reveal the old Bizarro looking back at him. The old Bizarro sadly reminds him that the heightened intelligence will not last forever. Bizarro only replies with a simple, “Yes. I know.”

Analysis: Although an interesting beginning to a potentially great arc, this issue did not really cover a lot of and really just set the stage for what is to come. We get to see this hyper-intelligent Bizarro which has not been seen before. The “What If?” potential of a plot like this can really offer some insight to a character which Lobdell has done a great job at building up since Rebirth.

I felt like I could sense some foreshadowing in this issue in regards to his intelligence leading to trouble, but there was not much to gather from this first part of the arc. We do get that last, tragic shot of Bizarro being reminded by his older self that this will only be temporary. If the story does a good job, I’m sure we will see, as well as Bizarro, that he was fine just the way he was before but it is still sad to see him face a “superior” version of himself and long for it to be permanent.

The pencil work by Joe Bennet did not do anything special, but did capture the brief moments of action well and I enjoyed the way he drew Bizarro. Now wearing a Superman suit with an actual “S” shield, he depicts him as an actual version of Superman rather than just a clone experiment stopped prematurely. Soy depicts Bizarro a little more muscular and hulking than the normal Superman so I will be interested to see if this may be a new direction for the character’s look.

Final Thoughts: Overall, a good start to this arc and I am intrigued to see where they take Bizarro’s character in the next few issues.