Review: Red Hood and the Outlaws #15 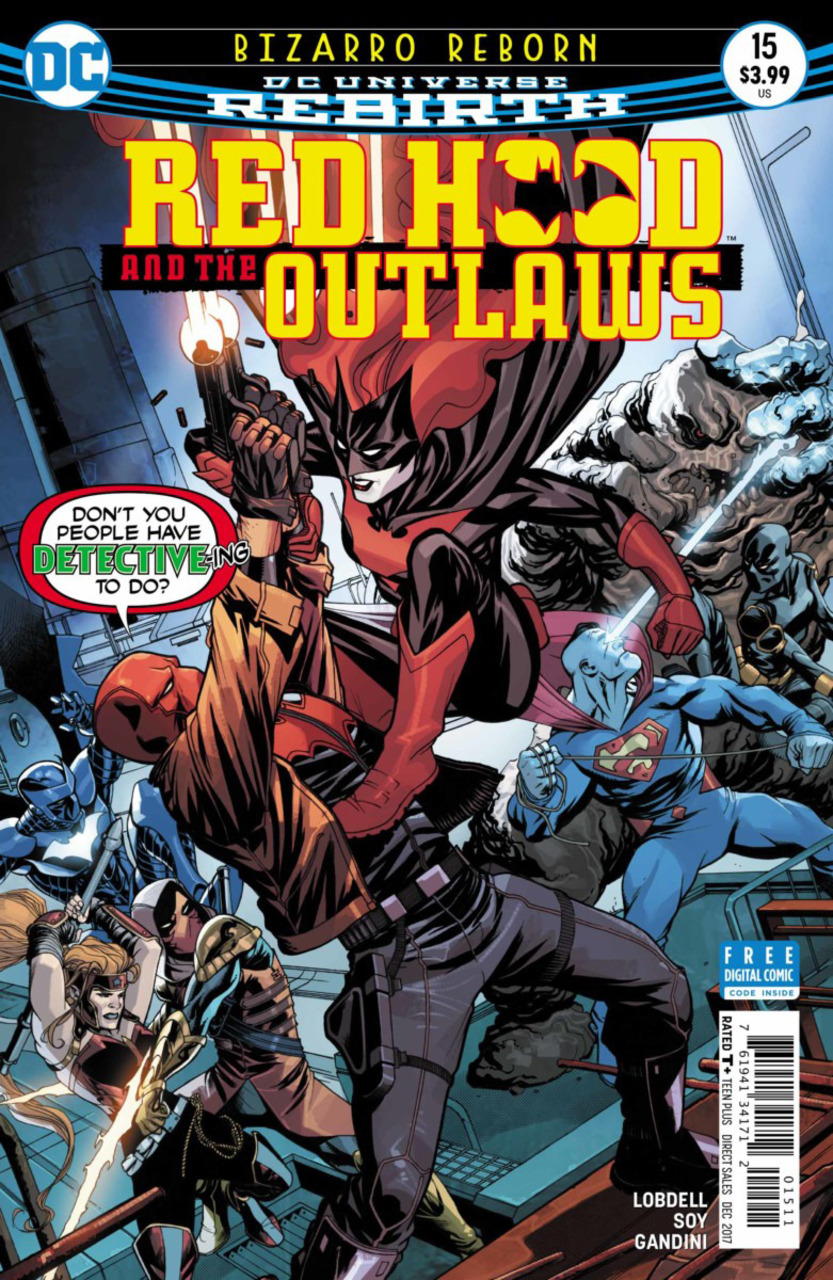 Overview: As the Outlaws being to make a name for themselves, they attract the attention of the other allies of Batman. The ensuing confrontation results in the capture of the Outlaws…which may have been Bizarro’s plan the whole time.

Synopsis: In one of the headquarters of the Bat-family known as “the Belfry”, Batwoman arrives at the request of Batwing to investigate the apparent disappearance of crime in Gotham. As the rest of the allies join them, Batwing displays the Outlaws new invisible “floating fortress” above Gotham. Shortly after getting a lock on the objects signal, the transmission is interrupted by a message that requests all vigilantes stand down as the Outlaws will be taking care of all crime in Gotham.

Down in Ma Gunn’s House for the Criminally Infirmed, Ma Gunn opens a letter from Jason Todd’s father addressed to Jason as a boy. After reading, Ma Gunn appears shocked by some revelation. Bizarro watches over her and is disappointed she did not listen to him regarding the secrecy of the letter. Elsewhere in the house, Artemis expresses concern about the newly changed Bizarro while Jason tries to reassure her that Bizarro is still the same man as before.

Alone in his lab, Bizarro is trying to study and understand the human brain. During his analysis, his speaking patterns begins to show signs of the old Bizarro which sends him into a rage. After smashing some monitors he realizes his hands are covered in mud. Bizarro is next shown captured by the allies of the Bat and held by some device meant to restrain Clayface. Batwoman is confused because Bizarro had a sophisticated fortress yet Clayface was able to sneak in. Bizarro reveals that he basically allowed it to happen.

Suddenly Red Hood and Artemis come crashing in through a quantum doorway thanks to the A.I. system of the fortress. A fight ensues between the Outlaws and the rest of the Bat-Family.

The group is eventually taken down by the Bat-Family, but Bizarro’s internal monologue suggests it is all by his design, before he passes out.

Analysis: As this issue was mostly just buildup to see what the new Bizarro’s plan truly is, I enjoyed it for what it was. The writing continues to be excellent along with artwork from Dexter Soy.

Regarding the artwork, Soy’s pencils for the other members of the Bat-family were so good that it made me hope he gets placed on some other books to draw a wider variety of characters. I say that but, selfishly, do not want that to impact his duties on this title so maybe it can be held off for a little while longer. Veronica Gandini coloring continues to elevate Soy’s artwork and create a great atmosphere that can have heartfelt moments as well as bombastic action.

In terms of story, I like how we still don’t really understand what is happening to Bizarro. It’s clear that he has this very “Luthor” side to him now with calculating moves that imply he is a great mastermind, but his former self did not seem to be in disagreement with the genius-Bizarro last issue. The fact that he could be losing his intelligence after having a taste of it would be truly tragic. However, if they make the smarter version of himself somehow “evil”, then this would help smooth over that transition emotionally for the Outlaws.

Lobdell seems to just know these characters and has their personalities really dialed in between the overprotective older brother trait in Jason and the skeptical yet concerned behavior of Artemis. He even is able to play around with some other characters from other books and stay true to them effortlessly.

Final Thoughts: Overall, I’m really looking forward to seeing this buildup continue and where reborn Bizarro is heading. The entire creative team here does not disappoint, even with this basic “filler” issue to get us closer to the revelations and climax of the story.