Review: Red Hood and the Outlaws #16 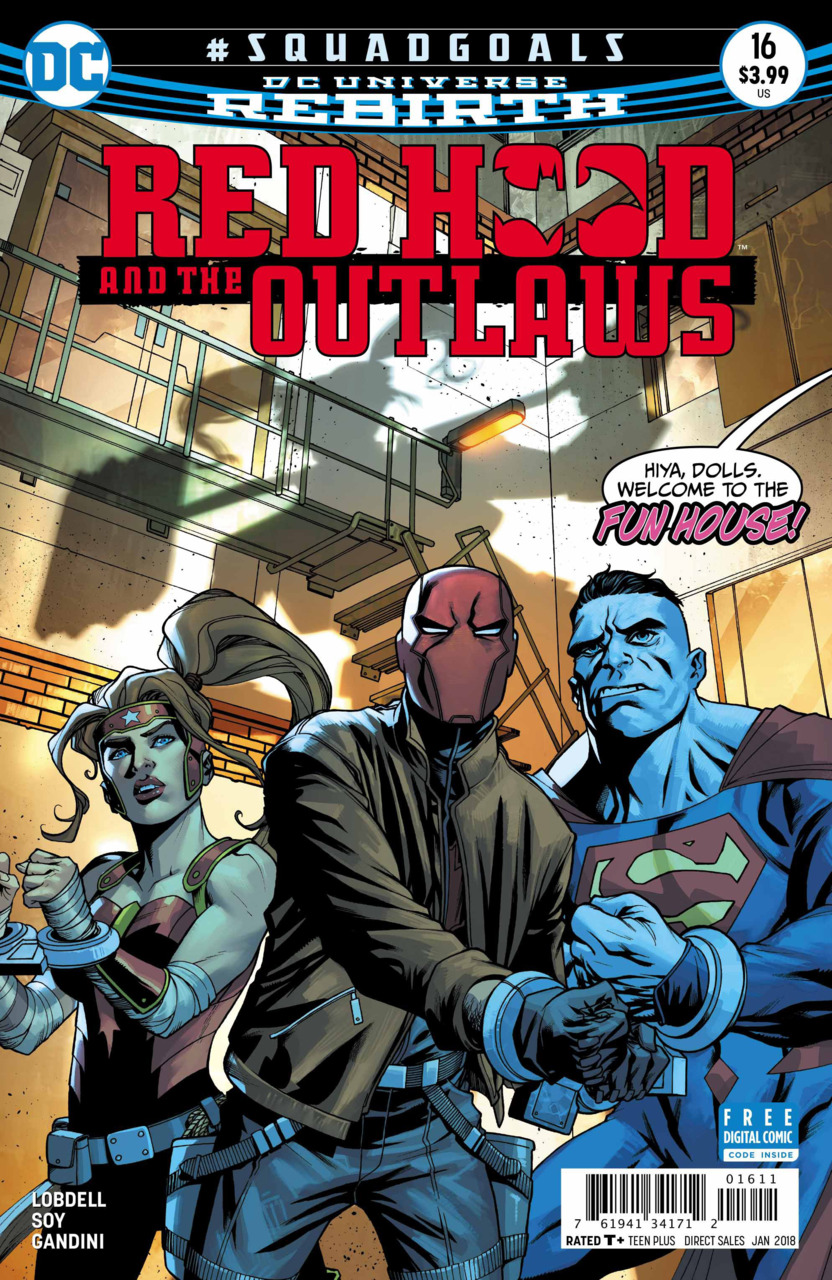 Overview: After being captured by Amanda Waller, the Outlaws must work with the Suicide Squad on a mission to save the world from the villain Harvest and his colony.

Synopsis (spoilers ahead): The issue picks up after the capture of the Outlaws. Red Hood is being interrogated by some soldiers and Captain Boomerang. Just as the Boomerang begins to wonder why Jason wears a bat symbol on his chest, the suit electrocutes everyone in the room. After freeing himself, Jason suits up again and makes his way through Belle Reve prison to find the rest of his teammates.

In a nearby cell, Harley Quinn conducts her own interview of Artemis. The interview takes a nasty turn when Harley decides to bash Artemis to death with a giant hammer. Artemis response by summoning her axe to her. Red Hood hears the axe and heads towards the sound. He is quickly surrounded by a room full of guards. Not wanting to break his promise of “no killing” to Batman, Jason begins to surrender when Artemis arrives and takes care of the guards.

Rushing to find Bizarro, they arrive in the Sick Bay to find him meeting with Amanda Waller, the head of the Suicide Squad. Bizarro begins to tell the rest of the team that he discovered a subterranean threat called Harvest and that they will assist Task Force X in bringing down this criminal and his colony before their unstable energy core destroys the Earth.

Before the mission begins, Red Hood and Artemis both express concern to Bizarro about working with Waller and the Suicide Squad. Bizarro asks them to trust him. As the Suicide Squad comes to suit up with the Outlaws, Bizarro excuses himself to “check one last thing” on a computer terminal. The groups then head through one of Bizarro’s dimensional portals and emerge in an frozen wasteland to begin their journey to stop Harvest.

Analysis: Unfortunately, this issue was probably one of the weakest of the run during Rebirth. Since its been over a year since this great run started, its a testament to the great creative team. The standout moments for the run have always been when the team comes closer together. Although the last issue had the Outlaws crossover with the Gotham Knights, I thought that it was handled better than this Suicide Squad crossover. I liked seeing the dysfunctional Outlaws potentially have to team up with the well organized Gotham Knights. Now knowing that they will team with an equally “unstable” group is a little too much of the same.

The artwork was on point as ever and, even though I am not a big fan of the Suicide Squad crossover, it does give Soy a chance to draw other characters from The Batman Universe. The fight between Harley and Artemis is ridiculous, but visually fantastic. There is no actual way Harley would stand a chance against Artemis, but the pencil work of their dynamic fighting styles makes it look possible.

As much as the story is proving to be a disappointment, the dialogue is engaging and fun. The humor between Jason and Artemis continues to make me chuckle while reading. The fact that Artemis can’t understand why Harley is considered a threat was hilarious and great to see played out in this issue. Jason’s witty inner monologue continues to entertain as well.

Final Thoughts: Despite the great artwork and good dialogue, the story itself just isn’t very gripping and often confusing in its scope. I feel like we have strayed away from the core point to the arc which was Bizarro attaining a genius level intellect. Even last issue showed him broadcasting to Gotham that he and the Outlaws would clean up Gotham, but now they are teaming up with Task Force X to take down a subterranean villain who could destroy the world. It just feels like the focus should be more on the fact that Bizarro literally died and is now back with an enhanced intelligence thanks to Luthor. Hopefully, the story is circling back to this point soon.