Review: Red Hood and The Outlaws #17 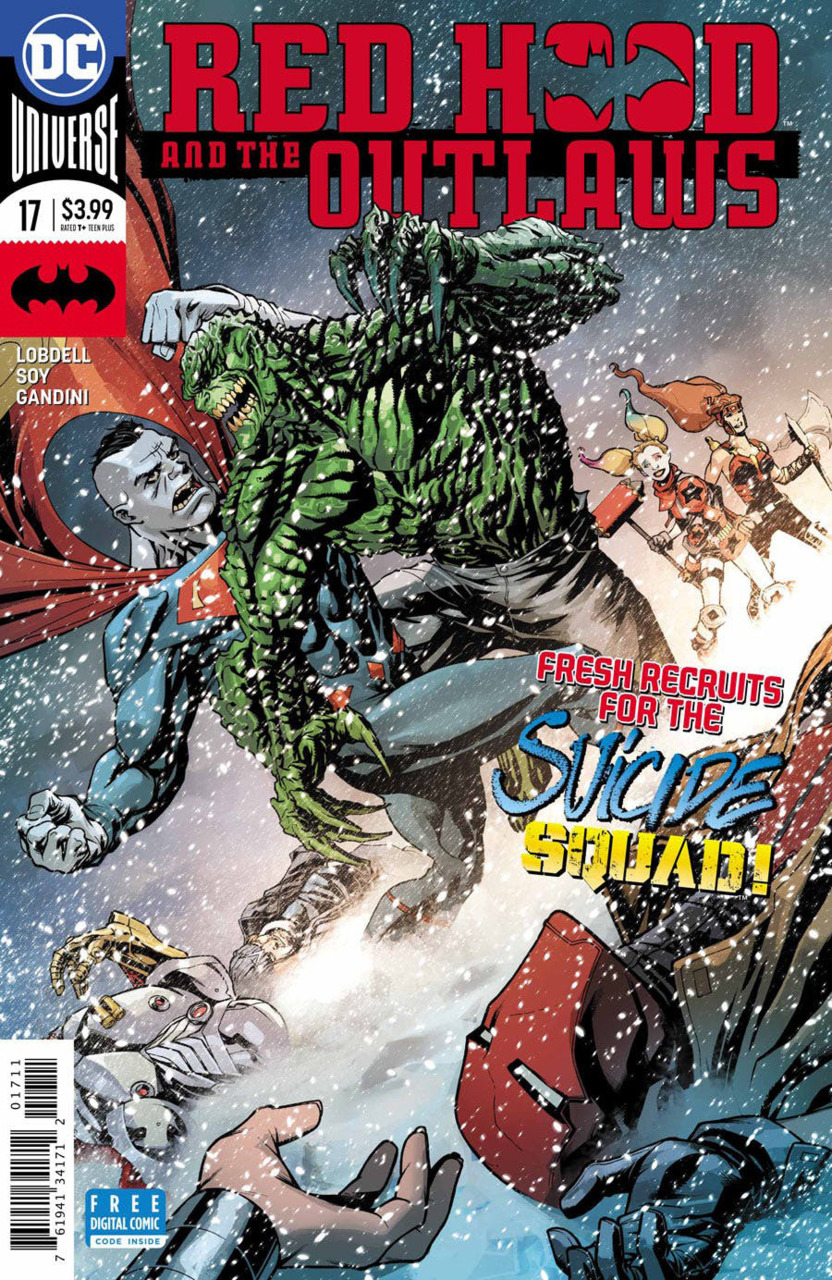 Overview: With the help of the Suicide Squad, the Outlaws disable a futuristic generator of the Colony that almost destroys the world. Despite the victory, Jason and Artemis are still unsure about the new personality of Bizarro.

Synopsis (spoilers ahead): Just after arriving in the arctic, the teams find their way through a secret door in the ice revealed by Bizarro. Although they are supposed to maintain contact with Amanda Waller, the base runs interference with their signal and forces Bizarro to take charge. Despite the many protests from the Suicide Squad, they ultimately allow Bizarro to lay out the plan. He divides the group into specific teams to help return the base to order and neutralize the threat.

Tasked with retrieving any resources or equipment used by Harvest & the Colony, Red Hood and Killer Croc head into the sewers of the base. Croc is offended by his constant placement into the sewers on missions, but Red Hood is able to steer the conversation to Red Arrow, AKA Roy Harper. Croc informs Jason that Roy is around but only sees him when he is drinking after spending time with his old Titan “friends”. Just as Jason begins to ask more questions about his old friend and teammate, the pair enter a room to find the villain Harvest murdered on a cross.

Elsewhere in the base, Harley and Artemis search for any survivors or inhabitants of the colony. Bickering and threatening each other constantly, the two eventually come upon a tunnel stained with blood where Artemis sadly concludes all survivors are dead.

In the main energy core room, Bizarro utilizes the help of Captain Boomerang and Deadshot to take out the main reactor before it explodes. He explains that he is unable to do it himself because the reactor emits Kryptonite radiation built by Harvest to defend against Krytponian clones.

Back in the sewers, Red Hood brags about how much damage he will be able to do with the futuristic weapons they found. Croc points out that Red Hood is on a path that he needs to be careful he does not drag his friends down with him. Even with the heart to heart talk, Red Hood gets back to business and offers half the weapons for Croc to take back to Waller.

In the main generator room, both Deadshot and Captain Boomerang have the job of shutting down the energy core receptor with synchronized strikes. They are able to shut it down and allow Bizarro to help complete the mission of neutralizing the station.

Once back at Task Force X’s base, Waller refuses to continue any liaisons with the Outlaws and promises to put them behind bars someday. The Outlaws return to their floating fortress above Gotham. The issue ends with Jason and Artemis discussing the “all grown up” Bizarro as he stands in another room above a pool of a green liquid.

Analysis: After a brief team up with the Suicide Squad, I am hoping we have seen the end of this particular plot point. It did not seem to fit the “smart Bizarro” storyline that had seemed like the main focus. The arc does not feel quite yet finished with many unanswered questions regarding Harvest and his destroyed colony but it feels as if the Suicide Squad might carry those plots forward in its own title, hopefully.

Although this issue and the previous issue have been my least favorite of the Rebirth series thus far, there are still positives to take away. Lobdell’s writing still delivers witty dialogue from Red Hood and building of his character. He lets us see a glimpse into Jason’s past that does not revolve around Batman, but more of a brotherly figure like Roy.

Although Soy’s artwork always elevates the title when a particular issue seems to fall short, this issue did not feel like it had anything to do with what has been happening in the Outlaws storyline since Rebirth. My only thought is that DC wanted to team up two team-based titles that do not sell as high as some other monthly books to boost numbers. The issue did not offer any significant character developments except for a few scenes of Red Hood and Killer Croc.

Final Thoughts: In the end, this issue continued a downward slope for the story set up in last month’s issue. I really hope the creative team gets back to the main story of Bizarro’s changes and how his intellect may not be the best thing for himself or the team.