Review: Red Hood and the Outlaws #19 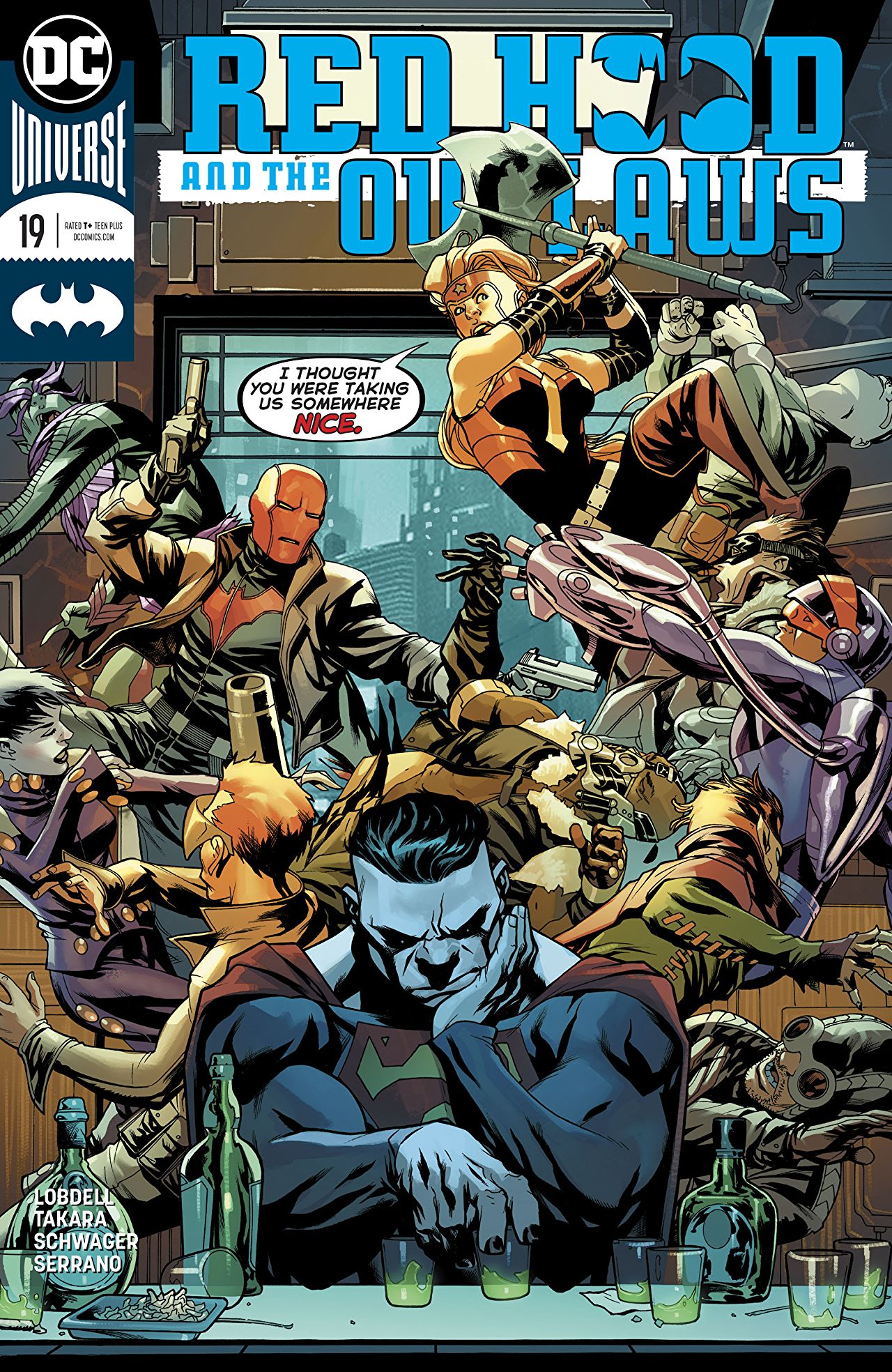 Overview: Despite the pretense of a date, Artemis and Jason begin to secretly discuss their fear of the changed Bizarro.

Synopsis (spoilers ahead): The issue opens on Artemis getting ready for a date with Jason. It’s implied that the date is the result of Jason losing some bet. Jason is visibly shy and at a loss for words at the sight of Artemis. After stumbling over some compliments, Bizarro assists him in getting the date started. He offers the team’s Porsche for Jason but Artemis elects to use the transporting doorways Bizarro invented.

Meanwhile, in Metropolis, Luthor is watching the most recent Outlaws’ adventures and taking a particular interest in Bizarro’s newfound intelligence.

Back in Gotham, Artemis and Jason are enjoying a fancy dinner. There are a few jokes regarding the beauty of Gotham and Jason’s alcohol tolerance. While these two are toasting, Bizarro is revealed to be watching them to which Pup-Pup (his imaginary Jiminy Cricket Superman doll) shames him for spying on friends. Bizarro is continuing to soak in his synthetic Kryptonite baths to help maintain his increased intelligence. Pup Pup begins to get on his nerves and Bizarro splashes some of the solution outside the tub. In a frantic scramble, Bizarro needs the chemical so badly that he even begins to lick the floor. Pup Pup is almost disgusted by what Bizarro has become.

In Gotham, Artemis begins to almost flirt with Jason and wants to find a more private place to get to know him. Jason opens the Quantum Doorway to the Batcave. Once they are off the grid and in private, Artemis begins to write on a dry erase board to express her true intentions for the date with Jason. She writes that she is concerned about how powerful Bizarro is becoming and their potential inability to stop him. Jason admits that Bizarro’s recent actions have been suspicious and concerning but he wants to trust his friend.

Back in the city, Bizarro becomes alerted to multiple beacons sounding off near the harbor. He goes to a “villains” pub to meet the source of these alarms, a man with multiple shifting faces named Solitary. He seems to know about Bizzaro’s synthetic Kryptonite and addiction to it. Solitary implies that he is behind bringing the Outlaws together and that he can easily overpower the new super-intelligent Bizarro. In an instant, he is able to render Bizarro unconscious.

Bizarro wakes up twenty minutes later to Red Hood and Artemis helping him off the floor and asking if he was alright. Bizarro dismisses the notion of any danger and allows them to lead him out of the bar with Solitary smiling in the background. Jason’s internal monologue states that he and Artemis will continue hiding their suspicions and watch Bizarro more closely.

Analysis: Another issue has come and gone in this arc with very little development but with more questions and complications. As much as some of the smaller moments have good character development, the story continues to falter. There were some panels and scenes which added tension and indicate we could be headed in the right direction.

Regarding the positive elements of this particular issue, we get a great scene done in “silence” as Artemis and Jason secretly discuss their fears of the Bizarro’s new power. It was a clever way that Lobdell had two characters, who are teamed with a metahuman with Superman’s level of hearing, talk about their teammate behind his back. This scene also shows the vulnerable sides of the both these characters as they set aside their pride and admit to their new fear of their teammate. Although not a big scene, the introduction of Lex was a step in the right direction. Many things since Bizarro’s resurrection and intelligence enhancement have been unanswered so it looks like we might be getting some payoff soon.

There were only a few negatives in this particular issue but they are part of a larger problem in this arc in general. Just as it seemed like the confrontation with Bizarro was looming ahead, a new villain (or villains as he has multiple faces) is introduced. He claims to know so much about Bizarro but his power set is not really defined as of yet. My biggest problem with that is the fact we already have a pretty big threat…a potentially power-hungry, intelligent Bizarro. That is plenty scary and enough of a threat for the rest of the Outlaws without introducing another villain.

Another weakness of this issue for me was the artwork. I just felt like this was a step down from previous issues. The line work is blurred and we don’t seem to get a lot of details to the characters’ designs or the city during the issue.

Final Thoughts: In the end, the issue itself was an enjoyable read but its spot in the arc contributes to a stalling of the plot. With a few positive elements like Lex’s reveal and the Outlaws joint suspicions, we seem to be moving in the right direction.