Review: Red Hood and the Outlaws #20 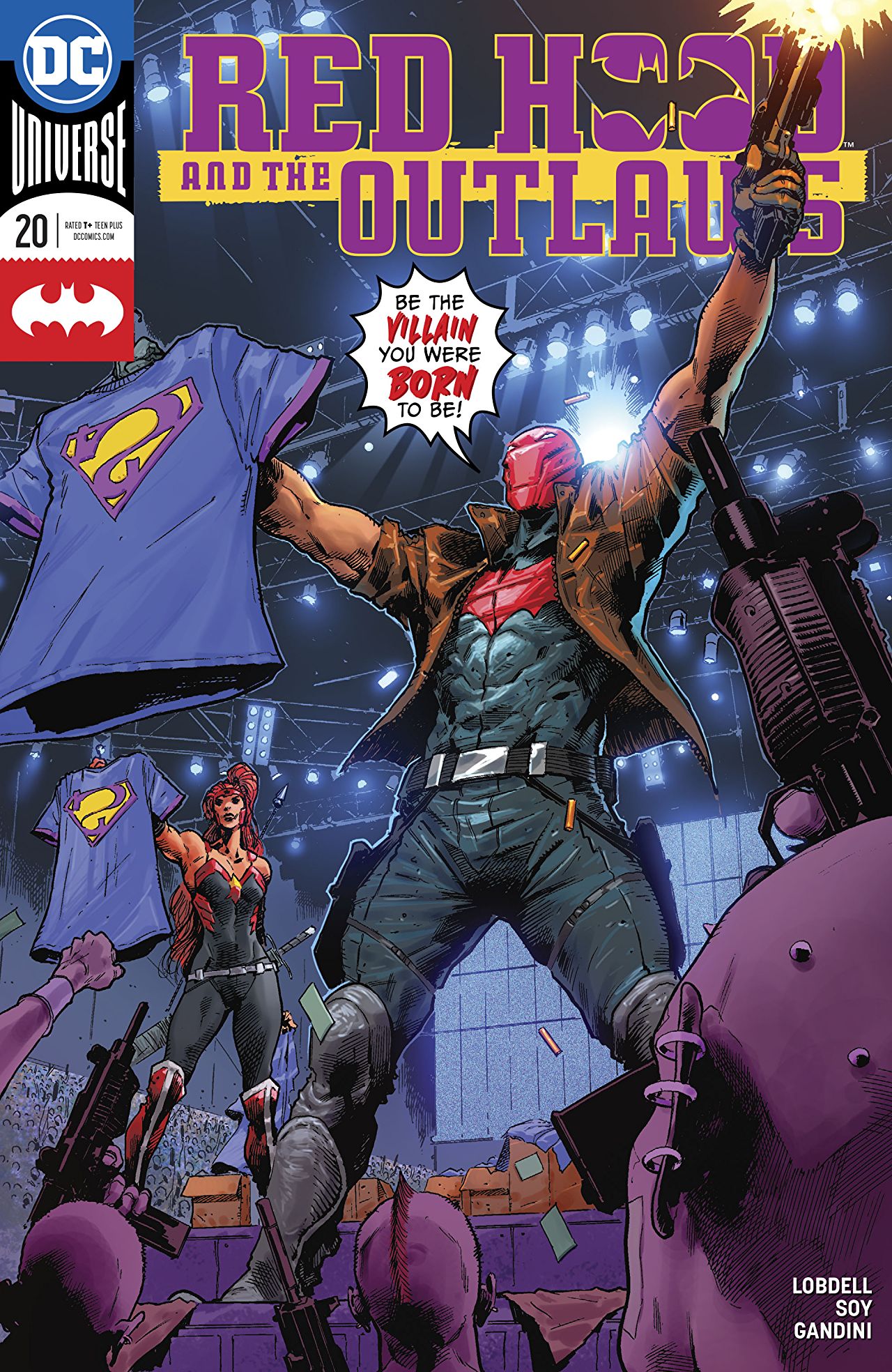 Synopsis (spoilers ahead): The issue begins in a nightclub in Gotham where a low profile criminal uses an app that seeks out henchmen for hire. Although he is excited to be invited to an upscale hotel for an interview, his girlfriend is not pleased and leaves him. Across the city in a high rise penthouse, Red Hood startles an older man named Frum who owns a multinational produce company. The company is merely a front for the tycoon as he is actually a weapons dealer. Red Hood admits that he would love to kill the man but made promises not to murder while in Gotham. He does threaten the old man and tells him to leave the US before making his deal with Cobblepot. Reluctantly, the old man agrees.

At a local diner, Artemis interrogates Bizarro about his past behavior. Bizarro tells a thinly veiled joke about being forced to kill Artemis should he actually reveal his master plans. The conversation is interrupted by Jason who arrives to play mediator and the trio enjoy a nice breakfast. After going their separate ways for the day following a “normal” get together, Jason uses the opportunity to shadow Bizarro to see what he is really up to.

In the Lenox hotel, Ben, the henchmen for hire from the beginning of the issue, is seen entering the lobby in search of the interview. He finds a large conference room with many other low-key criminals looking for work. Just as he is about to leave after being disappointed with the turnout, a fast-acting gas fills the room and Bizarro enters. He explains that they provide the lunatic crime lords of Gotham a steady stream of hired help. While cloaked by his suit, Red Hood is shocked by Bizarro’s plan to murder all these people. However, Bizarro stops and realizes how insignificant these henchmen are to the greater problem and releases them with their last chance to reform. Ashamed of what he almost did, Bizarro finds forgiveness from Jason who is all too familiar with the taking of life.

Back in their headquarters., Artemis takes advantage of the solitude to pry into Bizarro’s personal things and his room. She spots an odd green light and finds the hidden passageway which leads to the chamber filled with synthetic Kryptonite. No sooner does she discover this than Bizarro appears in full uniform wielding her battle axe wishing she had not found the chamber.

Analysis: This issue had it all, in my opinion. We get the witty banter that captures the humor and family dynamic of this team while also getting a dose of Jason’s view of his new “family.” The issue also gives enough suspense to create the necessary tensions for this plot. Lastly, we get fantastic artwork that elevates the storytelling.

With regards to the dialogue, Lobdell continues to excel with the different personalities of the Outlaws coming through with their mannerisms and speech patterns. The interactions at the diner do feel natural or “normal” as Jason labels it even if its undercut by suspicion and espionage. I also like the more serious moments like Jason forgiving Bizarro for a moment of weakness when faced with eradicating criminals. It helps to remind us that Red Hood has really had some dark, borderline villainous, times in his past. This only helps to add depth and layers to the Jason/Bizarro relationship.

Regarding the overall plot, it seems like its finally in the open regarding Bizarro’s secrets and schemes. Whether or not the uniformed Bizarro attacking Artemis was a clone of some kind or the real Bizarro, the story will inevitably pick up which is very welcomed after a number of issues where the pacing of the story felt stagnant.

Final Thoughts: I am very much looking forward to seeing Jason’s eyes opened to what Bizarro has up to behind their backs.