Review: Red Hood and the Outlaws #21 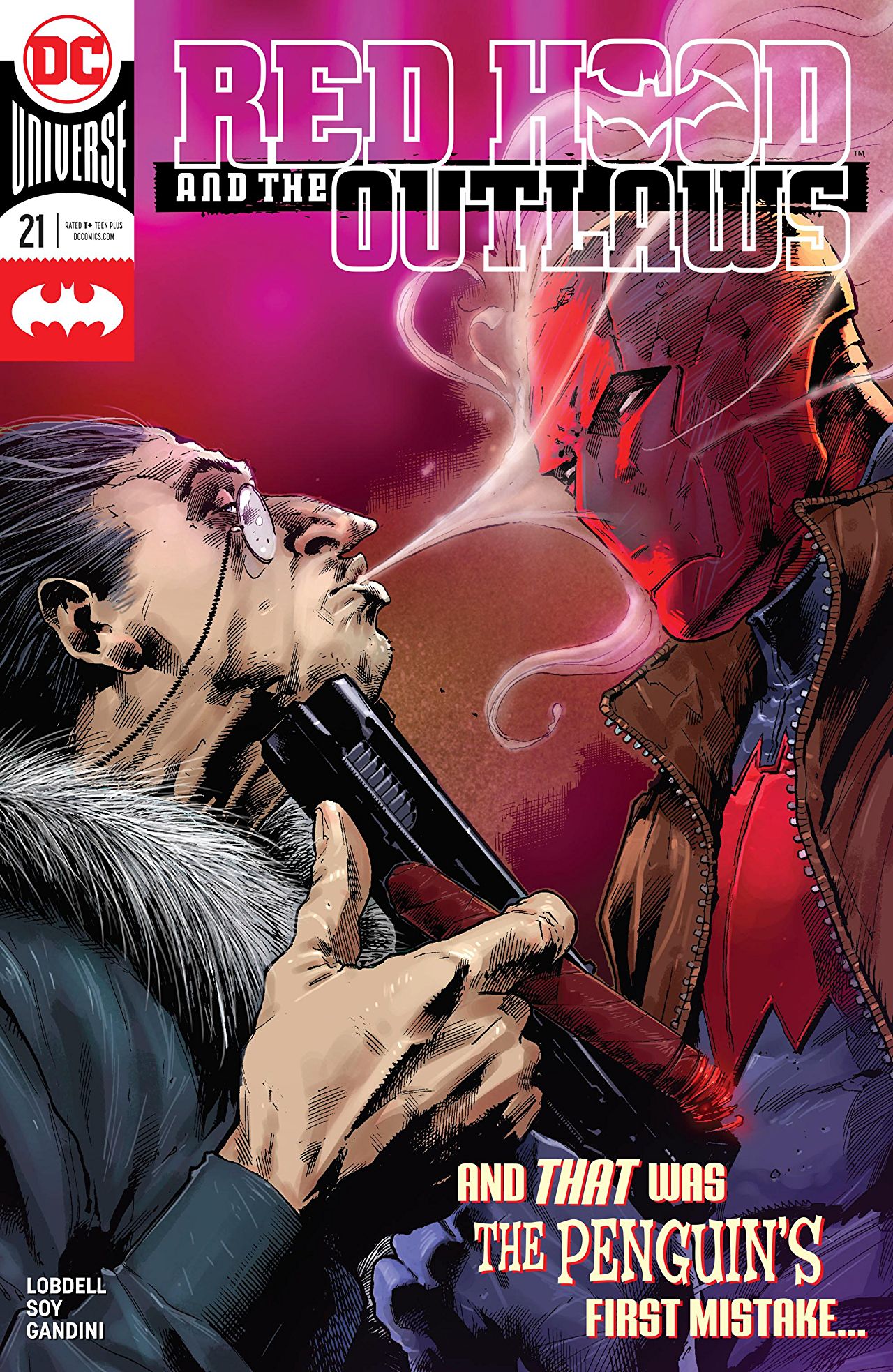 Overview: While Artemis attempts to help Bizarro deal with his addiction and the impending loss of intellect, Jason comes head to head with Penguin.

Synopsis (spoilers ahead): Up in the Outlaws’ headquarters, Artemis warns Bizarro to back off and disarm. Bizarro admits that his secret, synthetic Kryptonite vault is damning but he has a good reason for having it. He admits his fear of losing his intelligence and practically begs Artemis to help him. She states that she will do anything to help him.

Meanwhile, at the Iceberg Lounge, Jason, disguised as a high-stakes poker player wins yet another hand during a seemingly long run. After being asked by a beautiful woman to come with her, Jason cashes in his winnings and follows her up to a hotel room. As he makes a move on her, he is interrupted by the Oswald Cobblepot, the Penguin who reveals that he knows Jason is Red Hood.

Looking over Gotham City from their floating headquarters, Artemis and Bizarro are discussing humanity and its aggressive nature. Bizarro admits that he is having trouble relating to people. Artemis gets the conversation steered back to the main issue of Bizarro’s Kryptonite addiction. Bizarro states that it would be fine to go back to normal but, having had the intelligence makes regression that much more terrifying. Artemis counters that being an addict does not seem that much better. Bizarro then attempts a kiss to which Artemis rejects and tells him to walk with her. Artemis then makes Bizarro smash the vats of synthetic Kryptonite.

Back in the Iceberg Lounge, Penguin states that Red Hood will die tonight for having attempted to launder his own stolen money through Cobblepot’s casino. Suddenly the power goes out and the casino is thrown into chaos. Red Hood uses the opportunity to escape through a nearby window. Later on, he is at a diner eating with Alfred discussing his recent actions with the Outlaws and if they are actually being effective in stopping crime. Alfred seems to be proud of Jason and kindly offers to meet him again for brunch the next week. After Alfred leaves, a young woman named Faye Gunn (granddaughter to Ma Gunn) approaches Jason and offers a manila envelope that she was instructed to deliver if Ma went missing.

The issue ends with Pup Pup congratulating Bizarro on reaching out to his friends and destroying the Kryptonite only to discover that Bizarro had vials stashed away in his bathroom cabinet. In LexCorp tower, Artemis is about to meet with Lex Luthor to conclude unfinished business.

Analysis: With another issue gone and the intelligent Bizarro storyline still around, I find myself torn on how I feel about the arc/series at this moment. On the one hand, I can’t fault Lobdell for really diving into these characters and their motivations. However, I get to a point where I know that some kind of conclusion constantly feels one more issue away with no payoff. It’s something that I am not sure I am alone in feeling or if not, feel free to let me know below.

The writing itself is solid as ever and I do love the look into Bizarro’s fear of losing the intelligence that he has come into recently. It is a perfectly logical fear to lose something about yourself and anyone could relate to it on some level. I was glad to see that Lobdell is making Artemis sympathetic but not an enabler or ignorant friend as she proceeds to meet with Luthor at the end. This proves that she is smarter than even Bizarro thinks and is planning on fixing Bizarro one way or another.

There were some moments that felt out of place and didn’t match the tone of the arc. I was definitely confused by Lobdell having Bizarro attempt a kiss with Artemis. It felt like a moment in a comedy movie where a character misinterprets signals but the scene was revolving around Bizarro’s fear of slipping back into his simpler self having tasted real intelligence…not exactly the setting for a good awkward joke scene in my opinion. The other story point that felt out of place was Jason’s laundering of Penguin’s money through his own casino. The ultimate goal was to show his brazen nature and get him to the point where he talks to Alfred about his effectiveness. The creative team really could have had a quiet side plot of Alfred and Jason eating dinner together from the start.

Final Thoughts: Overall, I am torn on this issue as it had some really nice character moments but also had some unnecessary fluff and shoved in comedy.