Review: Red Hood and the Outlaws #22 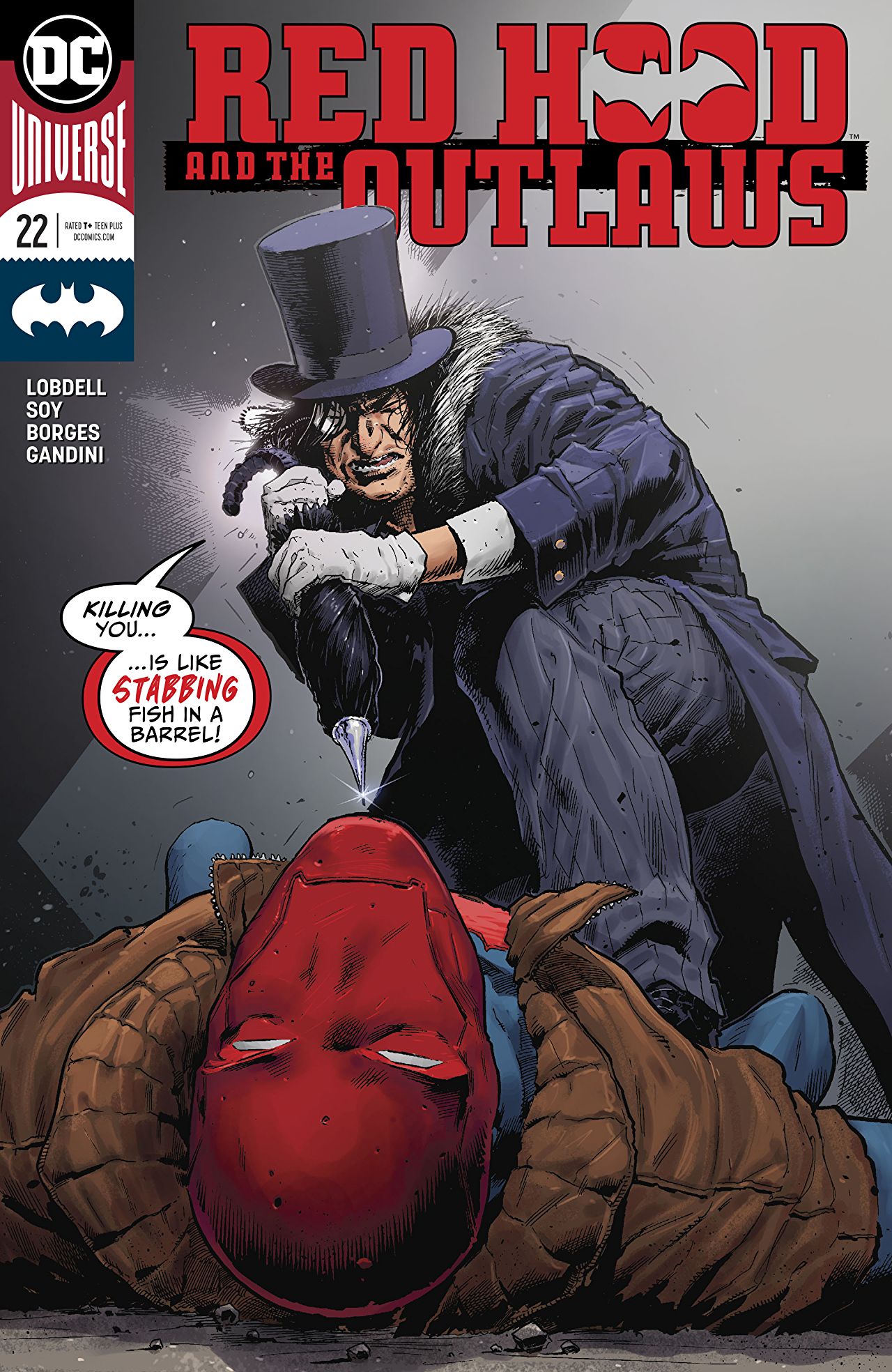 Overview: Artemis faces off with Lex Luther as Bizarro comes to grips with losing his intelligence.

Meanwhile, Artemis flashes back to being a hired killer for Lex Luthor before in present day being shown into Lex Luthor’s office.  Bizarro goes for a hot dog in his “Clark Kent” disguise and takes in the world around him as his intellect continues to deteriorate.  Jason Todd meets with Ma Gunn’s granddaughter, Faye Gunn, who passes on an envelope from Ma Gunn that was left for Jason.  They are interrupted when Jason gets a phone call from Bizarro.

Artemis meets with Luthor, asking him to help Bizarro, to which Luthor refuses.  Jason meets with Bizarro in a park and the issue ends with the two of them looking up into the sky.

Analysis: This was a tight, character-driven issue, centered squarely on Bizarro coming to terms with losing his intellect.  Writer Scott Lobdell does a fantastic job in giving Bizarro a real sense of tragedy and loss.  It’s really quite fascinating how in the right hands, Bizarro has turned from a second-rate and fairly cheesy Superman villain to a sympathetic character that the reader can sympathize and root for. I found Bizarro’s scenes in this issue to be touching and emotional and gave this issue a weight to it that I think balanced out the more action-packed and lighter moment.   I particularly enjoyed Bizarro taking in the world, noticing things that he will shortly be incapable of perceiving soon as his mind slowly slips away as well as the bittersweet end moment of Bizarro and Jason staring up at the night sky as his mind slips away.

Similarly, I enjoyed Artemis getting a few moments to shine in this issue.  I like this take on Artemis as a Ronin-like disgraced warrior and I liked the balance on showing some of the horrible things she has done in the past with her trying to save her friend by going to someone she despises for help.

Jason Todd is well used to give some relief from all the drama of the issue and drives the action of the story forward.  I have been enjoying the story’s use of Penguin in this series.  Penguin has in recent years been a character relegated to the back bench of Batman’s villains and it’s nice to see him get some love here.   Extra points for this Ma Gunn storyline that is starting to develop.  It’s nice to see such an early element of the Jason Todd character work its way into the book.  Jason Todd is a character that often gets written off as having contributed nothing from his time as Robin other than then the stories that came from his death and the callbacks to some of his earliest stories give the character a nice sense of history to a character that is well over thirty years old now.

The art by Dexter Soy and Allison Borges handles the action well, but its in the quiet moments with Bizarro that their art really shines.  They both do a great job of conveying both the emotion and the action of this issue and I hope we see a lot more out of both of them.

Final Thoughts: This was an enjoyable and emotional issue, that did a great job of paying off a storyline that paid off the story arc of Bizarro’s rise and fall in a touching way that didn’t feel forced or false.  Lobdell continues to show that he has a good handle on who these characters are and gives you characters to root for while driving the story forward.  More, please.