Review: Red Hood and the Outlaws #23 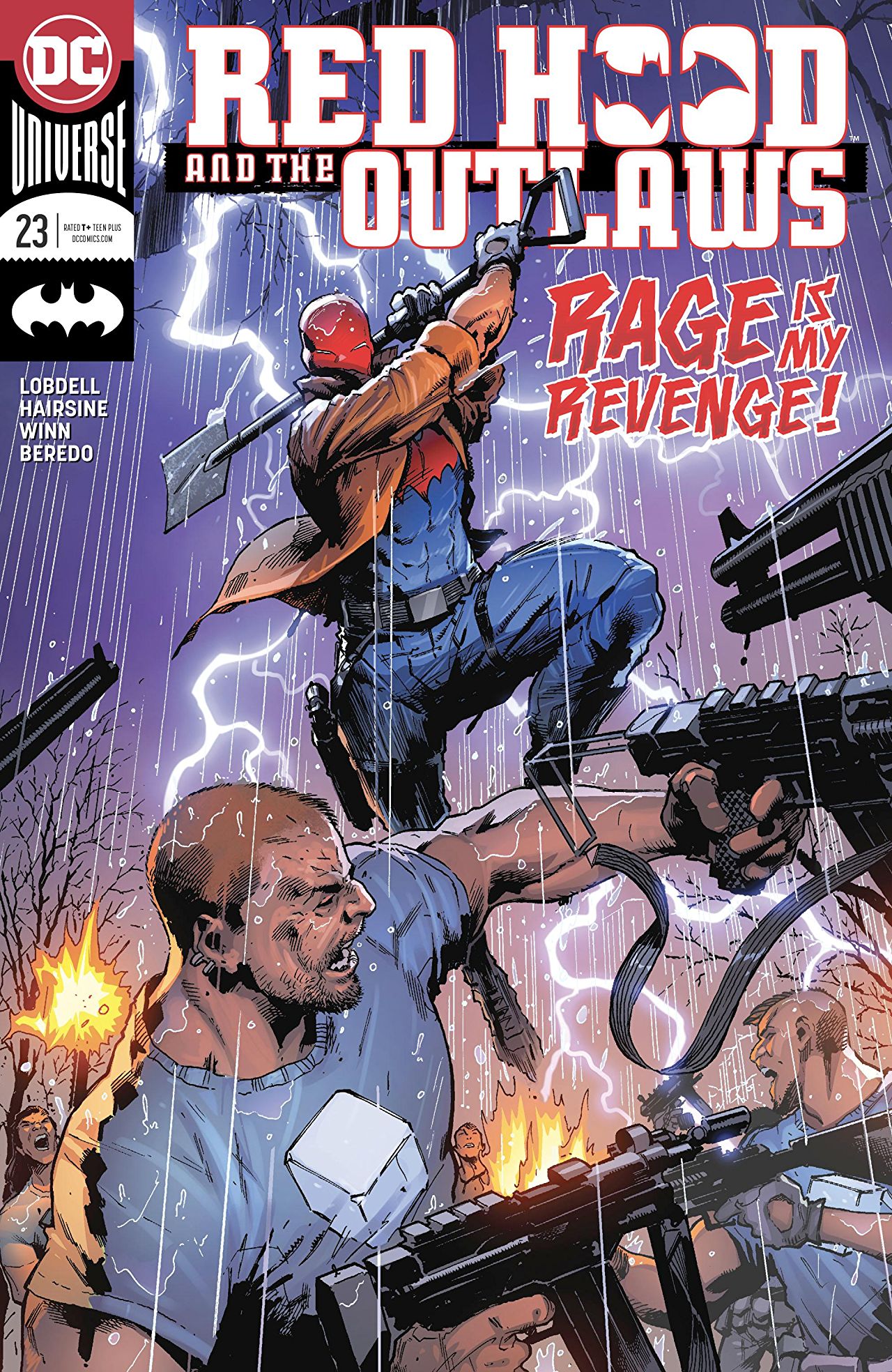 Overview: Ma Gunn’s secret package sends Jason on a trip down memory lane. This lane is not leading to his own memories though, but those of his father.

Synopsis (spoilers ahead): Not so peacefully trying to dig a hole in the dirt for reasons yet unknown, the Red Hood finds himself surrounded by Penguin’s goons.

One hour before, in Ma Gunn’s old house, Jason had been opening the package delivered to him by her granddaughter. The contents are none other than lost letters from his father, letters that she had been keeping from him since he was a child under her dubious care.

Willis Todd had started writing to Jason as soon as he got sent to jail, and he kept going until he no longer could. In those letters, he tells the story of how he met Jason’s mother. Him, a drug dealer, her one of his customers. He tells how, after a while, she decided to move in with him against her parents’ will. They’d lead their life as if there was nothing to lose, until one day Willis gets home to find her passed out on the floor. Pregnant, she was.

As the letters continue, Willis tells how he even had gotten himself a proper job once he realized he was going to be a father. Jason is born at home, and the first thing his father does is present him to Gotham. Life, Willis tells, were reasonably good for a while, until they weren’t. Jason was a sickly child, possibly as a result of his mother’s history with drugs. A child that would need medicine, medicine that wouldn’t pay for itself.

Willis writes about his despair, how he refused to let Jason die just because he couldn’t afford the costs of keeping him alive. So, he says, he manned up and went to work as a hired goon for Gotham’s costumed villains. Two-Face, Mr. Freeze, Riddler. It was Penguin that brought him to his last job, the one that sent him to prison.

He had heard about the death of Jason’s mother while in jail, and so he agreed to be subject to scientific experiments in a deal to reduce his time. That’s Willis’ last letter, one he finished with a promise to see Jason soon.

Back to the present and out in the Gotham’s rain, Jason is shown to be digging his father’s coffin, in a grave, he always knew where to find but never visited. That is where the Penguin finds him.

Analysis: No Outlaws in sight, and no Red Hood in the forefront. This issue is Jason Todd, unblended and with not a single drop of water. In fact, the scenes where he is in costume are not only the weakest in the issue but would also be benefited if he were out of it.

Red Hood and the Outlaws now seems to be entering the recent trend in superhero comics of giving a new focus to the personal lives and feelings of the characters, and Scott Lobdell chose to deal with one of the subjects that lie in the core of Jason Todd: parental figures.

That Jason had a rough childhood has been established since the character got his post-crisis origin. His father locked away in prison, his mother dying of an overdose, him living on the streets on his own. Despite being the first Robin to be properly adopted by Bruce, he still goes searching for the ghost of a mother he never met, a mission that ends in his death. Resurrected, he develops a strained relationship with Bruce. Lobdell had already gone into this theme by introducing Ma Gunn as a mother figure, and now he brings back the ghost of Jason’s father.

Jason’s past is often brought up but it is rare for Willis Todd to be in the forefront. He is promoted from the father who got himself locked up in prison to a man with a voice and a face, and a very homely face at that. Trevor Hairsine gave Willis a common face, slightly skinny and weathered. A guy that even look good were he living a better life. Jason’s mother – whose name is not mentioned, and there is probably a plot point hidden there somewhere – is much the same. Pretty, but more and more worn out as she gets swallowed by the life she lives. Borderless panels beautifully colored by Rain Beredo in pastel colors show Willis’ version of the origins of Jason Todd. The lost letter is a common enough device for retcons, but in this case it works for not changing much of what was already established as canon. In Willis’ view of the facts, he tried. He tried his very best to be a good father – at least what he believed to be a good father. Love, he says, is often not enough, but the way Lobdell and Hairsine framed him makes the reader believe that he loved his son deeply. Father and son are even given a full Lion King moment, Willis presenting Jason to his kingdom, a sunset in pastel colors on the background marking the high point of Beredo’s work. Despite all of that, there is one glaring weakness in this issue: the Red Hood. The opening and the closing scenes, the ones where Jason is in costume, are a timeline mess. It is practically impossible to guess how they connect, which came first and which came second. Hairsine’s art works very well all through the issue despite the casual disproportion between lower and upper body on his figures, but it slips up in the final pages. Suddenly, Jason’s hood sprouts lips and a nose, and the storytelling gets confusing as it is hard to tell whether the Penguin is speaking with the Red Hood or not. Even Beredo’s coloring seems less inspired, with no tone and no hint of the time of day or light source, something that he had been doing throughout all of the issue.

To end the comic with this slip is a shame, for the final page of Jason’s readings is a fine example of a silent page. The warm light, coming from the fireplace, the storytelling and the expressiveness are enough to give the reader the gut punch necessary for the scene. It is intimate and tone-appropriate, something that lacks in the Red Hood scenes, making them feel slightly out of place. Final Thoughts: With some minor execution slips, this is a well-built issue that adds to the history of Jason Todd as a character. It is a must-read for fans of the character, as it provides a look into one of the aspects of his life that makes him be who he is.