Review: Red Hood and the Outlaws #24 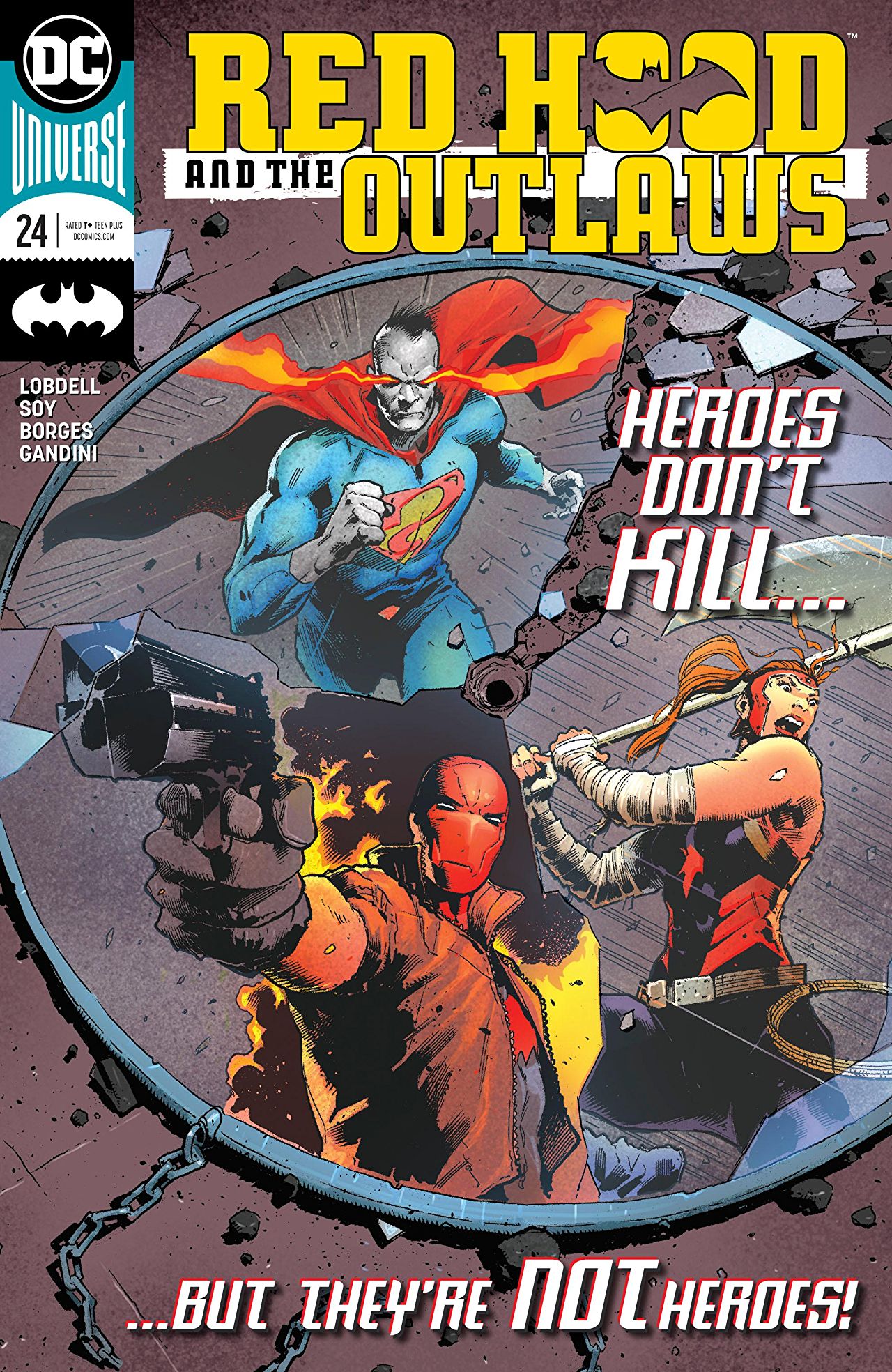 Overview: Everything comes crashing down for the Outlaws, and Jason questions Batman’s code once more.

Synopsis (spoilers ahead): The opening sequence is a homage to every character who has even been an Outlaw. Bizarro, alone in their headquarters, is imagining an Outlaws film featuring him, Pup Pup, Jason, Artemis, Arsenal, Starfire and the Creeper. By the end of his imaginary flick, he sees himself stopping Jason from killing the Joker.

From there, the narrative shifts to Jason. After reading his father’s letters and learning how he got arrested, he goes after the Penguin, who is opening a new ice-themed amusement park. Jason waits for the best opportunity to attack. While the Penguin gives a speech, Jason explodes the stage where he is standing, tases Penguin’s security guards and uses the dust cloud around them to conceal his actions. He tells Penguin to stand, otherwise he’ll just kill him where he is kneeling. This, he says, is about Willis Todd.

Downtown, Artemis is trying to enter their headquarters but the systems are set to keep her out. Bizarro set an emergency protocol in case he reverted to his old self, having the whole facility programmed to self-destruction.

Back to Jason, he takes his mask off to make sure Penguin knows who Jason is talking about. He finds it all so amusing that Red Hood just compromised his identity for the sake of a nobody. Jason, who is already enraged, gets his mind set on putting an end to it once and for all. As the dust starts to settle, policemen and reporters surround the two men. Penguin is not buying Jason’s talk, but he goes through with his word.

Meanwhile, Bizarro completely transitions back to his old self, and Artemis manages to break into the headquarters. In the Batcave, Bruce follows the events unfolding in the amusement park as they get reported on live television.

Analysis: If there was any doubt left in anyone’s mind, the opening of this issue makes clear as day that Red Hood and the Outlaws is ever closer to a big shift. To have all of the previous and present Outlaws together, fighting some villains, and for it to end with one of them holding Jason back is symbolic to the end of an era in which Red Hood teetered more towards hero than the anti-hero.

Reviews are, by their nature, slightly spoilery, but usually, I would keep the big finale out of the analysis portion of the review. This, though, is a status-quo changing issue, and, as such, it has to be laid fully bare for any analysis to make sense. There have been some signs sent as to where DC was leading Jason, and now they pulled the trigger. Or, more accurately, they finally had him do it.

After so many years of Jason wearing the Bat and reluctantly following Batman’s laws, bringing him back to his estranged position and original style would take an intricately well-developed arc. Mind you, DC owns the character, they could well just have him return to his own codes with no real storytelling reasoning at all. We’ve all seen it happen before. Despite that, they chose to tell it, and the story of how Jason finally goes overboard is being extremely well built.

Lobdell, who’s been inside Jason’s head for quite a number of years now, molded the situation in a way that explores both Jason’s character and the main theme of the Outlaws team. While undeniably a hothead, Jason is not necessarily impulsive. In his years of following the Bat-code, he has been usually hesitant enough to be swayed by his teammates not to kill, as Lobdell kindly reminds the reader with the opening scene. The danger lies in Jason being left alone with his own thoughts. Coupled with that, we have a theme that has been following Jason ever since his years as Robin: family. He’s perpetually resented towards his parental figures for having abandoned him, each and every one of them, Bruce included. Even then, whenever he sees a glimmer of anything that might prove the contrary – that he was loved, that he was not abandoned, that he has a family – he grabs onto that as if it were a life-saving rope.

Driven by grief over a parent he’s never realized had cared about him, Jason runs from his team, and, while alone with his feelings, takes some decisions he later regrets. This is, in a way, the same theme of A Death in the Family. Except now what is being killed is his relationship with the Bats. As grief and rage take over Jason, Dexter Soy delivers one of his best issues since the beginning of his run. The flow of his storytelling is perfect in this issue, not a single gap left between panels. Alongside with that, the camera movements coupled with the rhythm he imposes on the panels perfectly build the tension up until the climax. The pages go from his usual five panels to eight as he reaches the apex of the climax, to then return to four panels and finish with a splash, slowing it down for the issue to end. And, to top it all, his art gets to its most expressive, a moment allowed by Jason taking off his mask and showing Penguin the full force of his anger.

Alisson Borges, who worked on the Bizarro and Artemis’ sequences, has a more cartoony style compared to Soy’s, which fit amazingly well with the moment Bizarro is going through.  At first read, though, it was slightly difficult to notice the changes going between Bizarro’s hallucinations, his real world, and Jason’s point of view. This was partly due to Veronica Gandini’s decision to keep the same color scheme for both artists. While it makes the transition seamless, avoiding the disconnect that might come with a sudden change in art,  it also makes it harder for a reader who is unfamiliar with the artists to tell them apart.

Final Thoughts: The latest chapter in the history of Jason Todd as the Red Hood is coming to an end, and the creative team that has been guiding the Outlaws since the beginning of Rebirth is certainly closing it with a bang.