Review: Red Hood and the Outlaws #25 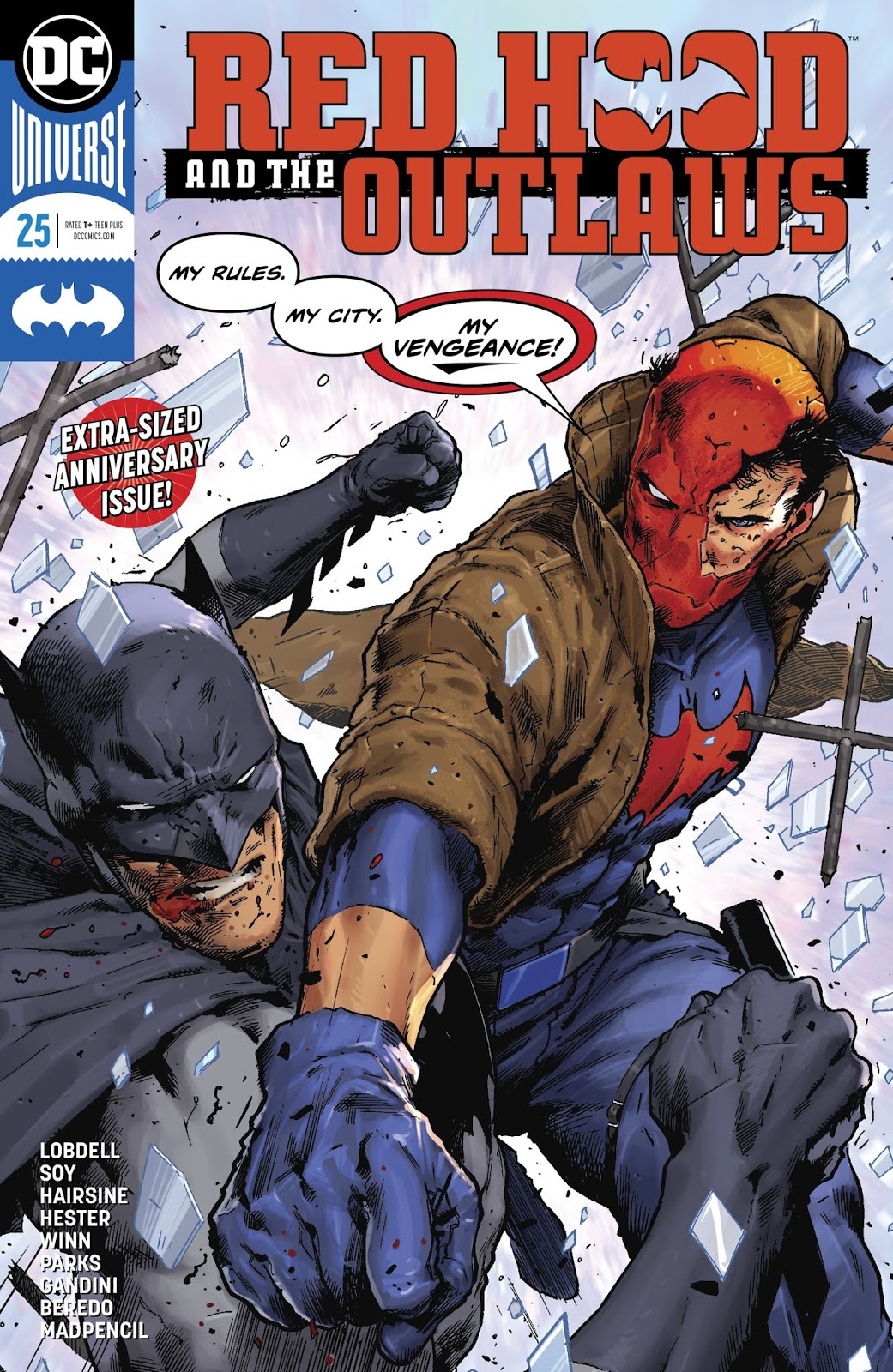 Overview: It is Red Hood against Batman as Jason deals with the consequences of shooting Penguin.

Synopsis (spoilers ahead): The issue begins to a flashback to when Jason Todd was still Robin as he ignores Alfred’s warnings and his own wellbeing to pull Batman from the Batmobile which had crashed and was sitting at the bottom of the Gotham River.  Jason performs CPR to revive Batman, joking that he won’t be rid of him that easy.  Batman puts his hand on Jason’s shoulder and tells him that if he leaves it will be Jason’s choice, not his.

In the present, Red Hood’s cloaking device fails him and he finds himself surrounded by police officers who are looking to arrest him for shooting Penguin at point blank range in the previous issue.  The officers are distracted as the Outlaws’ headquarters begins to fall out of the sky, sending debris to the street.

Red Hood’s attempt to get aboard the complex is interrupted as Batman attacks him on the rooftops and the two fight.  Batman has the upper hand until Bizarro arrives and drives Batman into a building and carries Jason to their doomed headquarters.

Artemis says that the projected casualties are 1200 and counting and the team takes a minute to embrace while they figure out how to stop it.  Bizarro rips a giant cable out of the floor and runs it into the Quantum Doorway, causing a portal to open that starts to pull the complex inside.  Artemis kisses Jason before throwing him clear as the complex crumbles and disappears into the complex, taking Artemis and Bizarro with it.

Batman appears behind Jason and quickly knocks Jason down, ripping the Bat-symbol from his chest and starts to drag him away when the rooftop explodes in smoke and an arrow in Batman’s side knocks him unconscious.  Arsenal appears and helps Jason to his feet.

In the epilogue, the super team “the Outlaws” shows up and saves Batman from the Joker, who dies a fiery death at the Red Hood’s hands and the Outlaws celebrate with the Justice League, until the adventure turns out to be a comic book read by Ma Gunn who is sitting alone in a room, until a vibrating figure appears who turns out to be Willis Todd, Jason Todd’s father.  It is then revealed that Willis is Gunn’s son and that she has always known that Jason was his grandson.  Gunn asks Willis to take her with him, to which he says that he can’t and then he disintegrates, with Gunn saying that she deserves her fate, and the issue ends with an exterior shot of her home inside of a bottle in the dark.

Analysis: This story is a well-executed payoff that writer Scott Lobdell has been building to since the Rebirth event.  Jason Todd has always been the … ahem… Red Hooded stepchild of the Bat-family and as a result, I think its difficult to tell a story where Batman and Jason face off without it seeming like we have been there before, so I have to commend Lobdell for being able to pull that off.

Jason is a character whose biggest strength is also his greatest flaw and I like how that is shown through the issue which is that he is someone that is ruled by his emotions, for better or for worse.  I think it is smart to start this story with a quick flashback to when Jason as Robin which not only serves to remind the reader of the bond that Bruce and Jason once shared but to highlight that Jason ignored Alfred and his own sense of self-preservation because of that bond.

I like how Batman is not interested in talking this out.  Bruce lives by a certain code and expects that those who work for him and you can feel the anger that Batman feels in having to take down one of his surrogate sons. The fights between Red Hood and Batman are well paced and I appreciate that the fight is fairly one-sided because let’s face it, mad Batman doesn’t tend to end well for the offending party and while this is Jason’s book, Batman is on another skill level.

The story also offers some real emotion with Bizarro and Artemis.   I especially appreciated the moment where they take a moment to hug. Both characters get a moment to shine in the story and I thought their moments of sacrifice were touching.   I never thought that a moment with Bizarro would produce such an emotional moment.  I think its very fitting that Bizarro, robbed of his intelligence, is the one who figures out a way to save the day and the moment between Jason and Artemis is also bittersweet.  I don’t for a second think that either character is gone for good, but taking Jason’s support system off the board is a great way to isolate him further which will be interesting to see going forward.   Roy Harper is a fitting character to return to get Jason out of a jam but I kind of hope that Jason ends up solo for the next bit, as I think that that pairing didn’t work very well in the pre-rebirth version of this book.

The meta-epilogue featuring what looks to be Ma Gunn’s punishment in the afterlife offers an interesting new piece of Jason’s backstory, and making Gunn Jason’s grandmother is an interesting twist that fits the character but I don’t see how that will really affect anything going forward.

As for the art, the story is broken up in such a way that the multiple artists on the book doesn’t feel out of place or particularly jarring.  I especially enjoyed the Capcom-esque style that Dexter Soy continues to bring to the main story of the book.  I do have one minor gripe that at the moment were Bizarro shows up to save Jason from Batman, it feels like there should be an added panel to explain what exactly happened, but that might be more of a plotting issue then one made by the artist.

Final Thoughts: It is mindboggling that a comic book with Bizarro would continue to give me the feels, but here we are.  This has consistently been one of DC’s best books.  Go buy it.