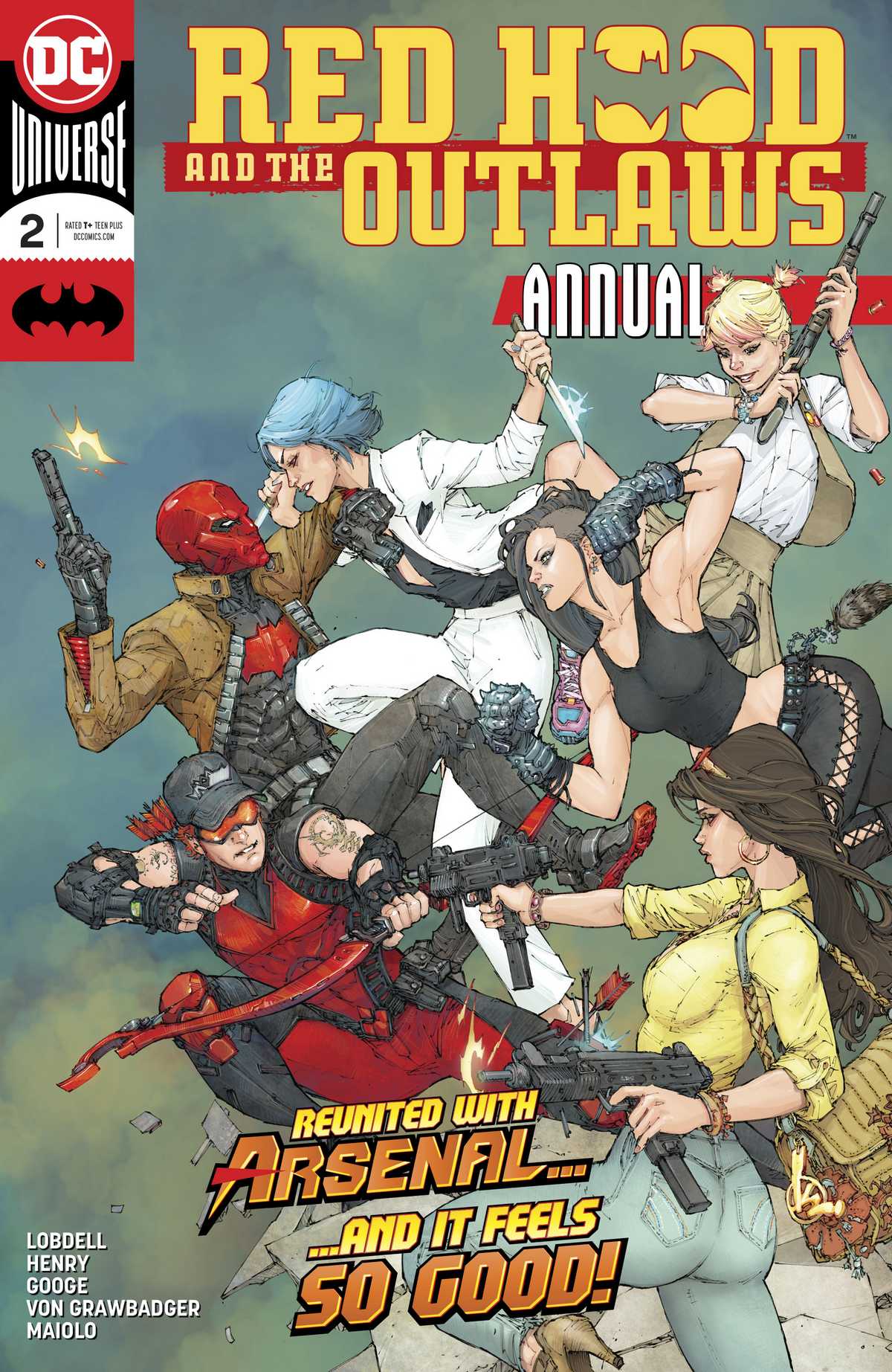 Overview: Arsenal and Red Hood are reunited for a short stunt.

Synopsis (spoilers ahead): Spinning straight out of issue #25, we’re presented with bruised and bandaged Jason training his aim on a coconut. His balance off, his injured right arm held in a sling and his aim compromised by a swollen eye, the kick of the gun simply sends him falling back on the soft sand. The coconut is left unscathed. Roy finds him there and, while not missing the opportunity to banter a little, helps Jason get to his spaceship and former Outlaws headquarters. Roy, not so subtle on his quest to cheer Jason up, is trying to convince him to join him on a mission. By pretending it is top secret and putting “No Jasons allowed” signs on the door.

Inside a closed off room, Roy has a holographic conversation with Waylon Jones, aka Killer Croc, about helping friends and overcoming their own troubles. Once they finish their conversation, Roy recites the prayer of AA. In another room, Jason is having the systems of the ship run a scan of the Multiverse in search of Artemis and Bizarro. The results show that no known life form matches his search.

In the following morning, Roy goes to wake Jason up and finds his bed empty. He’s off to the training room, working out on the still rings. A good sign for them to green light Roy’s not-so-secret mission, and so they’re off to Beijing.

There, Roy reveals his investigations on a new umbrella consortium to have led him to an old acquaintance of the Outlaws, Suzie Su. She is under observation in a hospital, one Roy believes is being used as a cover. After paying her a brief visit, Roy’s theory is proven right as Suzie Su’s sisters attack the duo. Not seeing any other way out of their fight, Roy explodes a section of the rooftop where they’re standing.

As their fight is about to resume, Suzie Su walks out of the hospital building, dirtied with soot, screaming rage and fire at the Outlaws and successfully stopping the altercation. She says the shipment was a setup by someone inside her group.

Back in America, Roy is giving Jason a lift. They’re in the middle of nowhere, driving down a road when Roy stops the car to talk to Jason. He mentions a place, “rehab for capes”, and he intends to go there. Jason takes the cue and offers to continue the investigation, but Roy invites him to join in the capes rehab. Jason refuses in a very Jason way.

Meanwhile, in another dimension, Artemis and Bizarro find themselves in a very strange reality.

Analysis: Standing between the fallout from issue #25 and their actual consequences coming in issue #26, the annual had the hard mission of dealing with the results of Jason’s fight with Bruce while still not compromising the storyline to come in the following issue. Annuals, as they tend to work this way, connect to the main plot while still maintaining their independence. In this aspect, this issue is highly successful.

Not only that, but the issue sets the stage not only for what is to come in Red Hood and the Outlaws – and should it still have the “and the Outlaws” if Jason indeed goes solo? -, but it also suggests Roy joining the cast of Heroes in Crisis. Roy’s character has been seen as the problem child of the sidekicks ever since Denny O’Neil and Neal Adams wrote him as a drug addict back in 1971, even before Jason made his first appearance. He’s got dibs on that. Their dynamic, as proven when the New 52 sent continuity to the sky, works amazingly well.

What makes and breaks this issue, though, is how much of a one-and-done it is. While fulfilling the purpose of an Annual, it does not do much more than being a fun, friendship story. It lacks a little bit of depth to Jason’s feelings, even if we’re given a glimpse of his grief for having lost Bizarro and Artemis. On one side, it’s mostly lighthearted tone shows how friendship can help people overcome dark moments – and, I believe, this is the main theme of the story. On the other, it lacked a bit of contrast to make this light shine brighter.

The same, in a way, can be said of Clayton Henry’s art with Marcelo Maiolo’s coloring. While dynamic and easy to follow, it is shy when it comes to shadows and negative space. Besides, Henry’s highly expressive faces are often hindered by the fact their features often seem too small for the size of the head, especially when the characters are looking down. Which is not to say their storytelling does not compensate, though. The elevator scene that leads into the action sequence is incredibly well conducted, both in script and art, giving a touch of unexpectedness that reminded me of Kingsman in a very pleasant way.

Final Thoughts: While keeping connected to the story being told in the regular issues, this Annual also works as a one and done that can be read independently. A fun read for those missing the old Red Hood/Arsenal times.