Review: Red Hood and the Outlaws #26 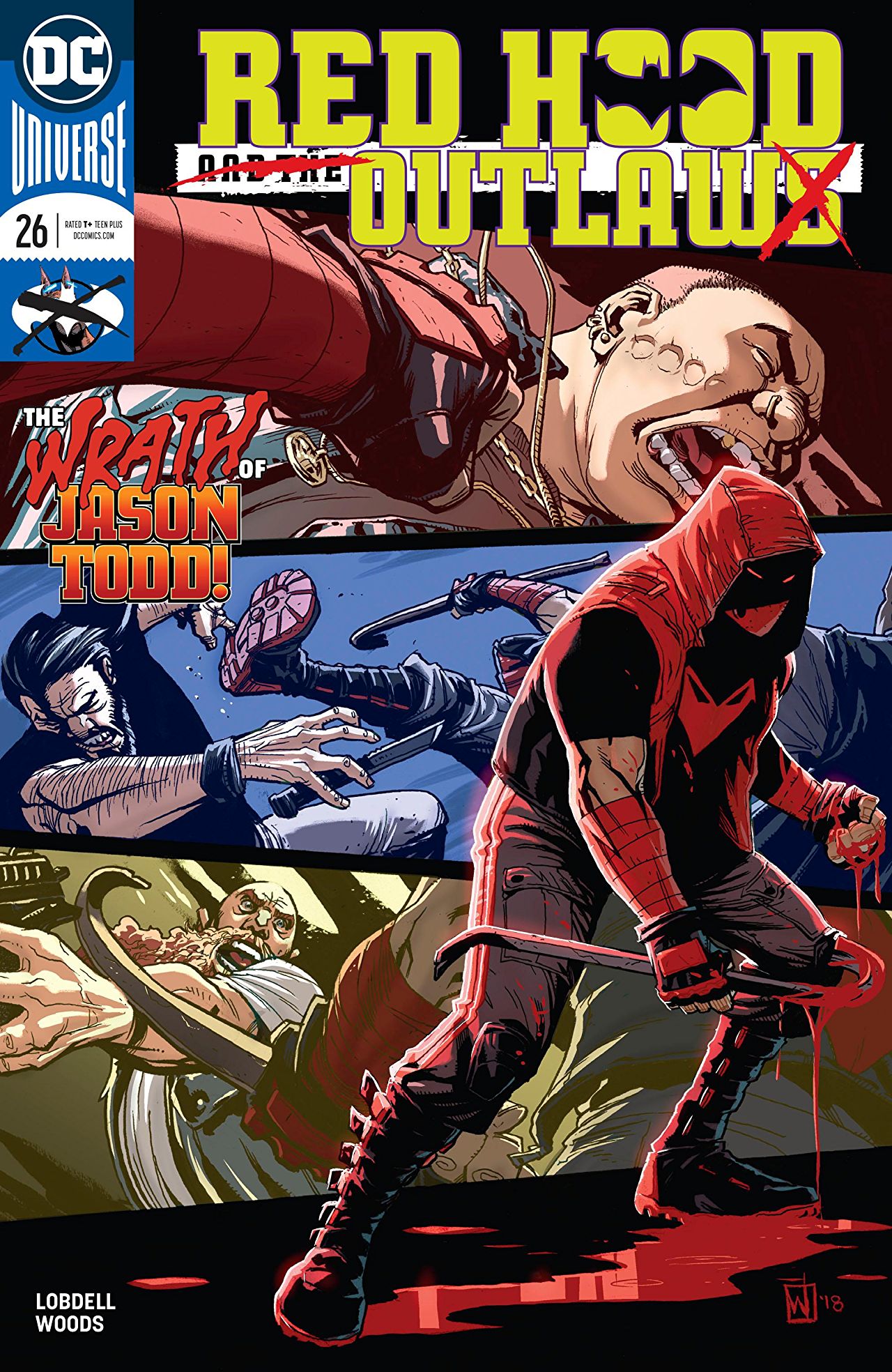 Overview: After leaving behind a considerable body count, Jason begins his first solo mission to take down a gang connected to the Underlife crime organization.

Synopsis (spoilers ahead): Seated on a bus traveling across what appears to be middle America, Jason Todd listens as the bus driver prattles on about his life story. Jason stops him suddenly as he spots a woman lying next to the highway. He gets out of the bus and carries the woman inside despite her refusals. She reveals that she is a federal agent who has escaped after a prisoner transfer went wrong. Her own partner was executed before her eyes and she only barely got away.

Soon a biker gang arrives looking for the federal agent. Jason, still hooded, confronts them and proceeds to beat and kill most of the bikers. After finishing with them, Jason fully suits up and heads to the police station where a mafia boss, Larocque, is putting together his crew to take down Agent Feeb. Jason is convinced that the mob boss is somehow connected to the Underlife crime ring that he and Red Arrow had been investigating. Red Hood takes down the entire gang and kills the mob boss with a car bomb.

Later in a nearby hospital, Jason meets with Agent Feeb to give her the wallet of her dead partner so that his family can get it. She tells Jason that Larocque and his gang are connected to Underlife and asks for Red Hood’s help but he refuses as his help is too dangerous for her.

Analysis: After a few months away from the title, I find myself disappointed with catching up and seeing where the character of Jason Todd is now headed. I thought, for sure, a new writer was on the title with this issue but was surprised that Lobdell is still writing. Although the “genius” Bizarro storyline had run its course earlier this year in my opinion, Scott Lobdell was continually writing solid issues and expanding on each character of the Outlaws. Now it feels like he has forgotten all the previously established history since Rebirth and is writing a bloodthirsty, thug who happens to be called Red Hood (oh because he literally has a red hood now).

Since Rebirth primarily, we saw real depth to Jason Todd and his ever-growing relationships between Artemis and Bizarro. They really were coming off looking and sounding like a real (albeit quirky) family. I knew there would be some change to the team dynamic following Bizarro’s reverting back to his “normal” self but this feels like a huge step in the wrong direction. Jason is now solo and killing left and right. The fact Jason tried to murder Penguin is not that far-fetched for him but it did not mean this direction had to be taken. There was always a little underlying problem with the Outlaws seemingly always doing good things but still considered “outlaws”.

Aside from my disappointment towards the overall tonal shift in the title, the issue had good action and delivered on a brutal Red Hood which may have been what many readers have been asking for.

Regarding the artwork, there was so much action and violence in this issue that I felt like the artist, Pete Woods, did not get to really show what he can deliver on this title. The action sequences were well drawn and depicted the fighting style of Red Hood on a much more brutal and lethal level.

Although some may like the new outfit, I just do not find myself as interested as I was prior. This feels like an upgrade to a “We Are Robin” street costume rather than a former member of the Bat-Family. The use of a crowbar also goes back to my confusion about whether the creative team is remembering the character’s past. The traumatic memories of Jason and his death by the Joker were touched on recently in the Outlaws title and I just can’t imagine he would let himself use that tool as a weapon against others when it represents the worst moment of his life. As with most comic book costume changes, I’m sure it won’t take long before we see another look so I’ll just try to get onboard.

Final Thoughts: I wish I had more good things to say about this issue but, aside from the well-drawn action, I did not think the new Red Hood was a very compelling character I want to root for. When he was with Artemis and Bizarro, he felt like a person recovering from past trauma and getting a legitimate second chance at a family. Now it just feels like a vengeful thug wearing a red hood.