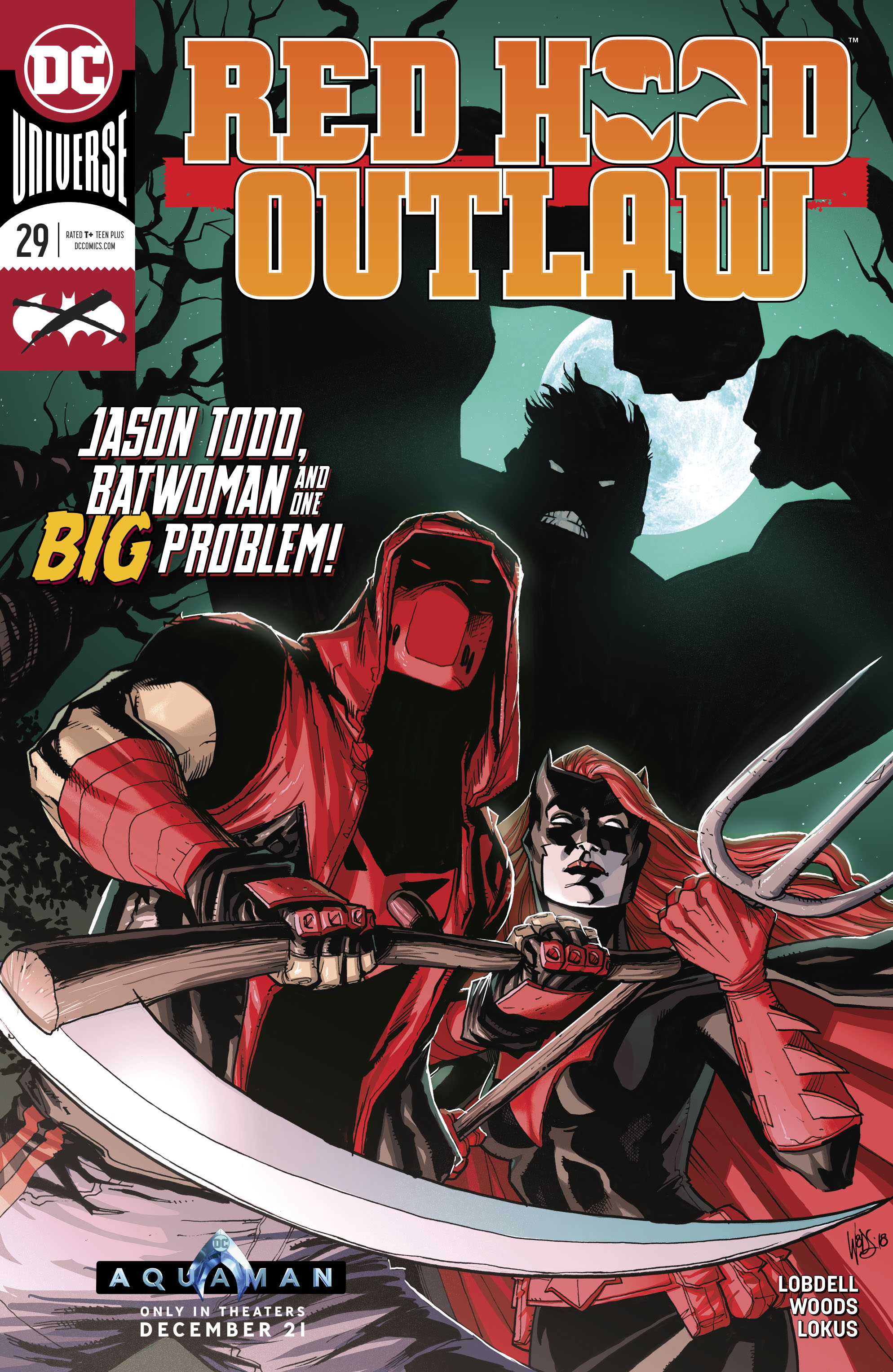 Overview: As Batwoman and Red Hood take on the town of Appleton, Jason learns more about Underlife’s true roots and where they are truly located.

Synopsis (spoilers ahead): The issue picks up where previously left off with Red Hood and Batwoman facing off against former townspeople transformed into Grundy type creatures. They are able to work together to leave the cornfield where Jason was left in previously.

Once they have a moment to speak, Kate uses the opportunity to express her condolences for the death of Jason’s friend, Roy Harper. Not taking the bait, Jason dismisses any attempt to bond with Batwoman. The two formulate a plan to take down the leaders of the Appleton monster town at a nearby mansion. Kate goes to rescue children of the town while Jason confronts the pie lady, who appears to be the head of Underlife’s organization in three states. Jason fights her and, during the fight, learns that the true leader of Underlife is in the Deep South.

After defeating the pie lady, Jason proceeds to destroy the mansion and regroups with Batwoman who is with the children. Batwoman states how evil seems to spread even to remote areas of the middle of the country, not just in the corrupt cities like Gotham. The two then are met by Detective Montoya who offers a ride to Jason. The three agree to head “south”.

Analysis: Although this issue felt like a conclusion of sorts, the ending and certain revelations definitely seem to hint at a continuation of the Underlife arc. Despite funny dialogue and hilariously grotesque monster killings, this issue left me disappointed in where this arc went.

Regarding the above-mentioned positives, the dialogue was as quippy and fun as ever. It always helps to pair Jason with a serious character like Batwoman. Their back and forth illustrates the stark differences between the motives and general feelings the two have towards crime fighting. Nothing really new about their characters is developed in this issue nor do I see a lot of chances of that continuing because their dynamic is similar to Jason/Bruce relationship in some ways. It would be great to get back to the former outlaw relationships where Jason gets to mature next to the infantile and sweet character of Bizarro.

The action was filled with lots of grundy-esque violence as the villains of the town were, essentially, knock-offs of the original Solomon Grundy. Some of the kills of these quasi-zombies took ridiculous turns giving it an almost “Zombieland” feel.

While that led to some relatively creative action set pieces and fight choreography, I did not feel any tension because the villains felt so out of place still. Without the tension, there did not feel like there were any real stakes. I really thought Lobdell and rest of the creative team were heading in a different direction with villains of middle America (biker gangs, hostile townspeople, etc.) and getting away from elite, wealthy villains sometimes portrayed in Gotham. With Jason being given another clue as to Underlife’s roots in the Deep South, there seems to be a chance this could still be the case but given the use of hulled out zombies in Appleton, I am getting my hopes up.

Final Thoughts: This issue offered very little in character development and instead focused on high octane action which certainly has its place in comics but, without tension or genuine villain, there is not a lot of staying power for these types of stories. I really do hope they ground the story going forward with Jason heading into the Deep South to face off with the man known as “Solitary”.