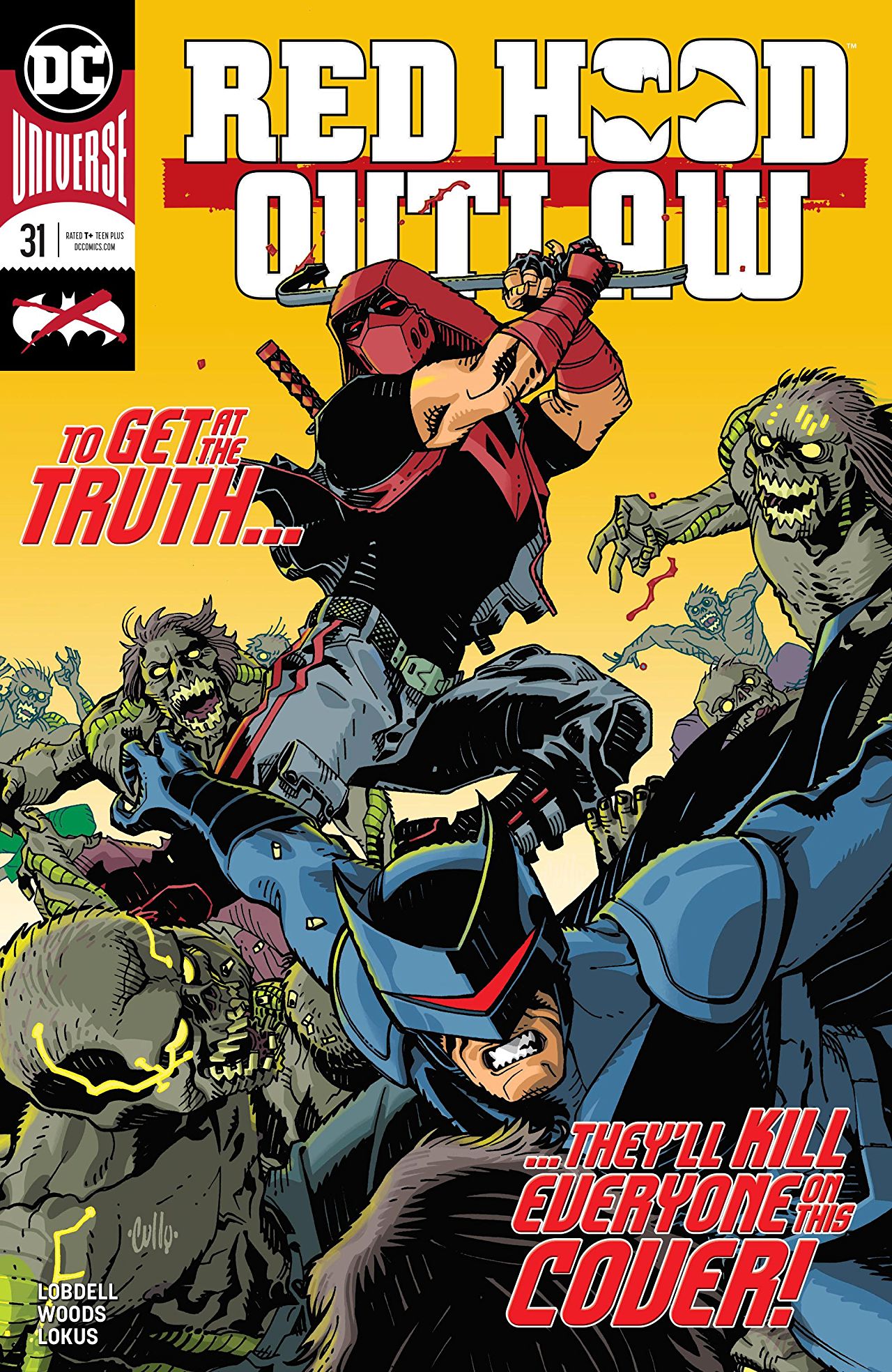 Overview: Jason faces off against the Solitary. With the help of a few other heroes, Red Hood is able to defeat the Solitary and finally put Roy to rest.

Synopsis (spoilers ahead): Opening in the Hierva el Agua prison, Jason squares off against the Solitary. The Solitary begins monologuing about Red Hood assuring an almost royal role in his criminal empire. Jason, frustrated with the insane rantings of Solitary, accuses him of holding a teenage metahuman against his will. The metahuman is revealed to be a boy named Bunker. Red Hood throws his crowbar towards Solitary which he easily dodges. Disappointed at Jason’s apparent lack of aim, Solitary is shocked when Jason’s true target of the test tube is struck by the crowbar. Solitary reveals that he intended to use Bunker to control his “Monday” monsters.

With no apparent backup, Solitary makes for the tubes holding his murderous creations to unleash them on Jason and Bunker. Jason tackles him and begins to pummel but discovers its an illusion as Solitary begins to open the test tubes. He is not able to do so, however, as Miguel (Bunker) begins to hurl a barrage of bricks at the experiments. Solitary slips away in the commotion.

Jason takes a moment to reintroduce himself to Miguel as they had met back during a Teen Titan’s adventure. Miguel agrees wholeheartedly to help Red Hood. Jason then takes off with the dog he picked up in the last issue. They are jumped by Wingman who again tries to get Jason to come back to Gotham. As the prison begins to crumble, Jason tells Wingman to be apart of the solution and join him. He tells Wingman that Bunker is in the process of leveling the prison. As Red Hood rushes off to face Solitary, Wingman whispers to himself that he should have told Jason the truth.

Jason finds Solitary in a random cell where the crime lord divulges his past and the experimentation he underwent to gain the illusionist abilities he now has. He then reveals that he is Jason’s father. Jason does not believe him and tells him to show off a batarang tattoo that his father had on his arm. Jason rips off Solitary’s sleeve to reveal no tattoo to which he throws the crowbar off panel to where the real Solitary is, as he was originally facing another illusion. The crowbar impales him in the gut and Jason takes the dog and leaves the prison as it collapses on itself.

Following the demolition of the prison, Jason says goodbye to Roy Harper at his grave and tells him the threat of Underlife is over.

Analysis: With an apparent end to the Underlife arc, I was overall disappointed with it. That being said, this particular issue was a good read and I really enjoyed it. Not just for the setup it provides going forward, but the action itself and the pacing was very well done.

Lobdell’s dialogue felt very true to character and the quippy and witty lines between Jason and Solitary were genuinely fun to read. It did not seem that far fetched to think Solitary could have been his father with how similar he was in the way that he spoke.

Regarding the setup, it looks like we might get a different cast of outlaws until Bizarro and Artemis show up. Wingman obviously has the most mystery around him especially with his line about not telling Jason the truth. I am definitely looking forward to seeing where the creative team takes his character.

Final Thoughts: Overall, the Underlife arc had a lot of potential for a grounded, gritty Red Hood story in middle America but went in a more sci-fi, “horror” route which did not make this feel like the best setting for a Red Hood solo arc. In the end, it looks like he might be getting a new team which has the potential for some good character development and always solid, well-written dialogue for Red Hood.