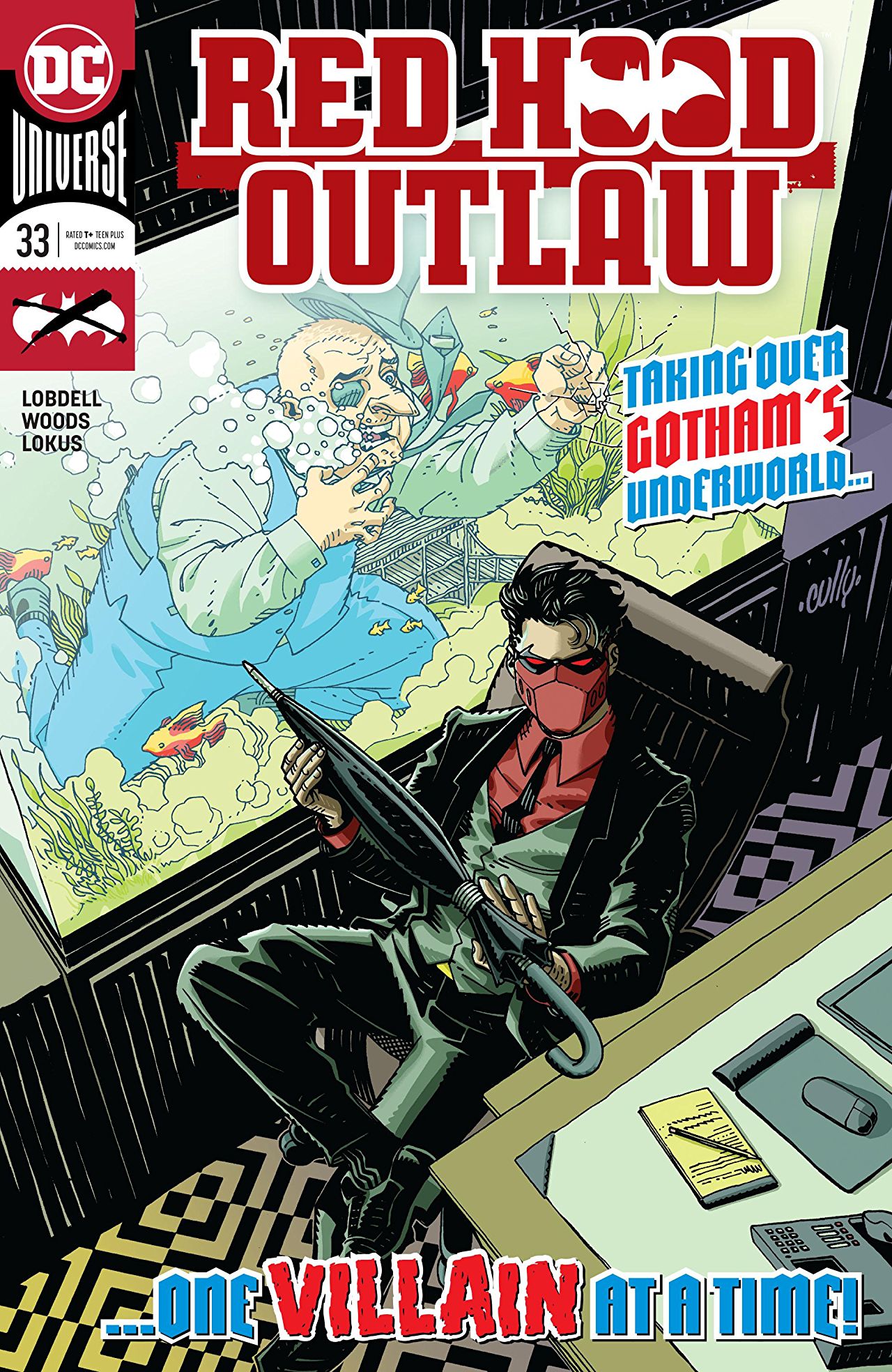 Overview: As Jason assumes more control over Penguin’s empire and the Iceberg Lounge, other darker forces are at work to avenge the apparent demise of the Penguin. With the aid of his new team around him, Jason has to defend what he has taken.

Synopsis (spoilers ahead): The issue opens with Jason taunting Penguin while he still remains trapped in his own panic room. Jason remarks at how he grew up thinking how scary the Penguin was and how he was taught to never cross him. Turning away disappointed at what the villain has become, Jason is interrupted by Miguel (AKA Bunker) at the door to discuss casino business. Miguel admits that, despite having served with the Teen Titans, he feels more fulfilled than ever. After the pair leave, Penguin states that he has contingency plans for if he ever disappears.

Elsewhere, a group called the Five Aces becomes aware of the Cobblepot’s sudden disappearance. As paid muscle, they are contractually obligated to investigate. They make their way to the Iceberg Lounge. While Jason is reacquainted with an old girlfriend, the mercenaries spring their trap.

Once inside, the group comes face to face with some of Jason’s own hired “guns”, the Sisters Su. The two groups clash in the casino and, despite being pretty evenly matched, the Sisters come out on top. One of the Aces escapes and tries to take on Jason alone. With the help of Bunker, Jason is able to protect Isabel and don his uniform to take on the sword-wielding assassin.

Red Hood is able to take down the criminal but he disappears and it is unclear whether Jason killed him or the man simply disappeared. After meeting with one of the Sisters Su, Jason is relieved none of their people were harmed in the attack. Taking a drink, Jason states he will need to get “maintenance” on clean up right away.

Analysis: Having recently introduced Jason’s rise to power of the criminal underworld, we get to see the first skirmish of possible many that Red Hood will need to engage in if he wishes to hold onto his new position. It is a great issue with quippy dialogue and nonstop action.

Although a lot of action, Lobdell does not leave the issue needing more solid writing. His writing and characterization of Jason makes it believable for this anti-hero to take on the role of “crime boss” while still being able to throw on a costume to take down some “worse” bad guys. He holds on to the belief that everyone he has shot or attacked had it coming which makes him a little single-minded and arrogant, but that is part of the character of Jason/Red Hood that readers enjoy. His taunting of Penguin plays at his immaturity, but he is smart enough to surround himself with capable associates. It is the blending of these elements that will definitely make for an interesting arc of Jason as the crime “Prince of Gotham”.

Artwork by Woods showcases the staff and defense that Jason has assembled in his organization. The Sisters Su get front and center attention in this issue as they battle the Five Aces. Their fighting style and skill give them a unique look that is highlighted in the art. Another character whose power set is enhanced by art is Bunker. Seeing his movements of bricks and structural objects is a different kind of power among the allies of Red Hood.

Final Thoughts: Overall, the issue was a fun read and I am thoroughly enjoying this arc and how it placed Jason in such a different role than he has been in recently.