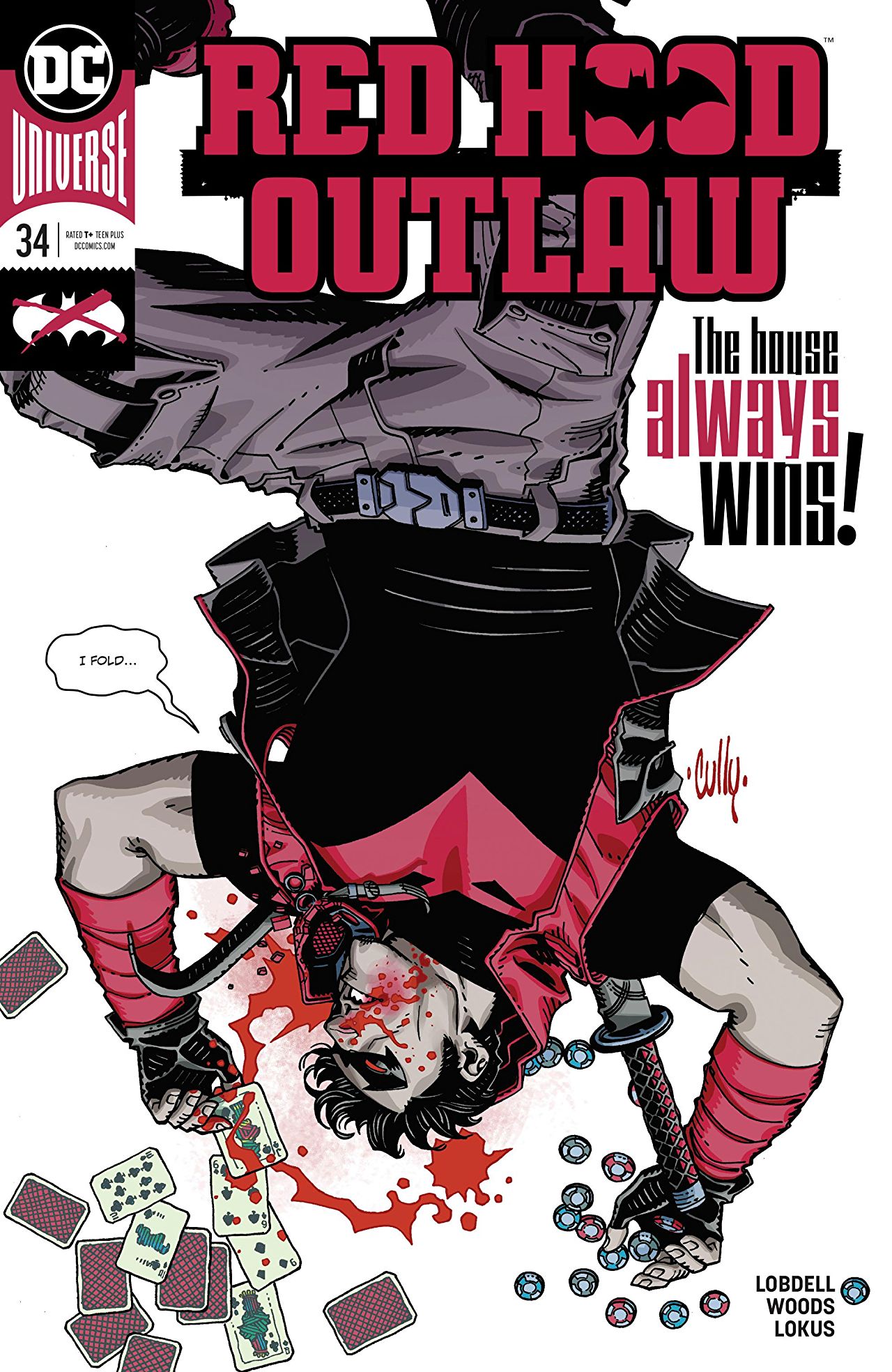 Overview: Jason Todd cleans house and deals with Penguin’s illegal past, while his own past starts piling up on him.

Synopsis (spoilers ahead): The issue opens up with a flashback to one of Jason’s adventures working for the All-Caste, reminding audiences that didn’t read Lobdell’s original New 52 run what Jason did back in the day. This theme of revisiting the past is continued as Jason goes on a date with Isabel in Paris, his current sweetheart after reuniting with her back in issue #33. This is then quickly followed up by revisiting the still fresh wound of Roy Harper’s death.

After all that talk about memory, we go visit our local psychic, Miguel, aka Bunker, down at the Iceberg Lounge, who decides to engage the reader with some expositional dialogue before lampshading the absurdity of talking out loud to himself, followed immediately by Penguin lampshading the fact that he can’t overhear what Miguel is saying (just reminding the readers who he is and what he’s hoping to accomplish working for Jason).

Before we can return to our protagonist, the story returns to the All-Caste, but the present day, as our mysterious Himalayans bicker about Jason, ending in a foreboding message about things yet to come.

Lastly, we learn why Jason is in France in the first place, and its not for the romantic vistas. He’s shutting down all the money laundering operations the European crime families were running through the Iceberg Lounge, with our unknown Wingman playing backup to make sure he’s not in danger. But his other wingman, Miguel seems to be up to something when he comes seeking Penguin’s time.

Analysis: After the rather uneventful story arc before this involving Underlife, it’s great to be reading Red Hood doing some real adventuring again. There’s a heavy focus on the past as I covered earlier and I really like that. I mentioned “theming” earlier as a half-joke but it really is a theme. How many writers can we really count who bother to include themes in their individual issues?

Overall, not a lot actually happens this issue. It’s mostly treading the same ground. The issue of Penguin’s laundering was brought up and solved this issue, though, with luck, this won’t be the last we hear of “the walrus” and “pip-pip McGee” though my money is on the tall blonde in a white suit that was standing the entire time. Clearly a big important lady. I’m not too sure if the designs of these European crime lords don’t fall into offensive stereotypes or not. Walrus over there is even smoking from a Calabash pipe and another has a beak nose.

Now, I doubt Miguel is actually going to betray Jason. It’s clearly a suspense-driven cliff-hanger designed to make us want the next month’s issue, but it’s a nice ending all the same. I hope next issue we get to see more of him and learn what else is going on in his head.

Final Thoughts: Great issue overall, some of Lobdell’s better writing, a little lackluster, but we need some downtime between excitement or it just gets boring.