Review: Red Hood and the Outlaws #2 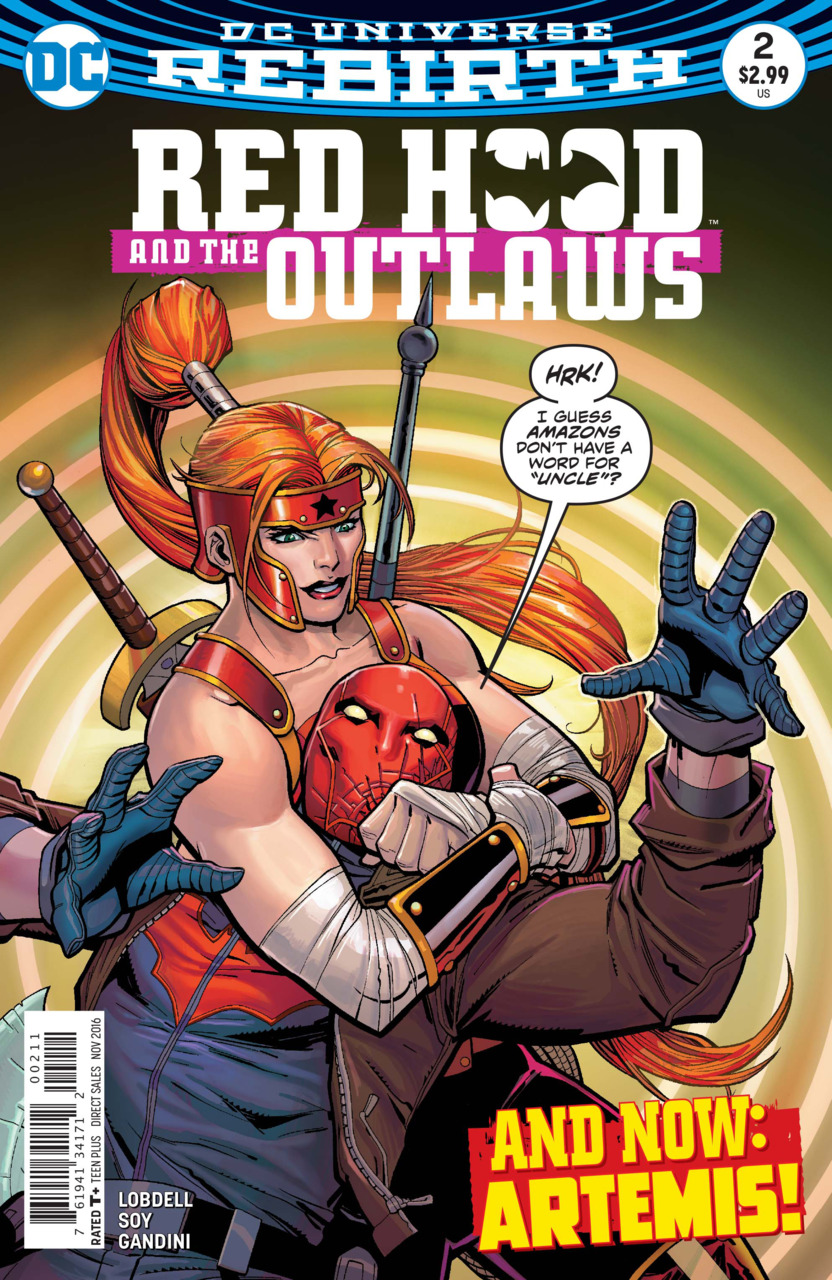 Synopsis: The issue opens with Artemis giving a brief back story into her origin. She was always told by her mother that she would be a great and kind warrior and would be the champion of the Amazons. However, on her sixteenth birthday, she attempted to take the Bow of Ra but was denied by the goddess Nephthys. The goddess seemingly banishes Artemis after telling her that is not ready for such a weapon.

Back in the present day, Artemis meets Red Hood after they both hijack a train carrying special cargo. Red Hood explains that he needs the cargo for his “boss” Black Mask but Artemis warns him that the weapon he would be taking has the power to destroy the world. After a crack about how dramatic she is being, Jason attempts to take her out with nonlethal methods. She easily deflects his bullets with her axe and quickly gains the upper-hand. Jason takes a moment to ask about the weapon and Artemis gives a quick rundown on the Bow of Ra. Jason then electrocutes here with his Bat chest symbol. Black Mask applauds Red Hood and again reiterates why he has chosen him to be the heir to his criminal empire.

While Black Mask explains that the cargo is actually the future of genetics, Artemis awakens and attacks the gang with her axe which can move on her command. As the gang opens fire on Artemis, Jason chases after her as they take cover. Artemis reveals that she knows he is a double agent due to how he pulls punches and was shielding her. Through many back and forth jabs at one another, they do come to the conclusion they need to team up to keep the cargo out of Black Mask’s hands.

Black Mask then flies away with the entire train car attached to his helicopter. Artemis throws Red Hood up to the car and follows him in a single leap. Once inside they see that Black Mask has taken the clone of Superman.

Thoughts: Contrary to last issue, this one did a great job getting me into the overall story with a few key elements. Although we still have not seen him out of the tank, we get our introduction to Bizarro and more character development of Artemis. The dialogue between her and Jason is really entertaining and fun. Her constant use of metaphors and the fact he pointed that out felt like the capturing of the tone of the relationship that these two will have going forward. I’m very interested to see how they fit Bizarro into the group.

The artwork by Dexter Soy is quickly becoming one of my favorites in this Rebirth. His depiction of Artemis as a darker Wonder Woman looks fantastic and her fighting style is really fun to see in each panel. Soy also puts together panels where you feel like you are in the point of view of the character. This really makes each action scene more fun as you feel like you’re facing down Jason’s twin handguns or Artemis’ gigantic spinning axe.

My only criticism is that I wish they called this entire series “Dark Trinity” as the title of the issue is named. The name would have added some gravitas to the series and separate it from the less than stellar performances of Lobdell’s earlier works with Red Hood. This series has a lot of potential to be a great, fun contrast to the actual Trinity series coming this month. Both could be really enjoyable but have different tones. Despite the misbranding of this series, I’m very much looking forward to the next issue and the development of Bizarro.