Review: Red Hood and the Outlaws #3 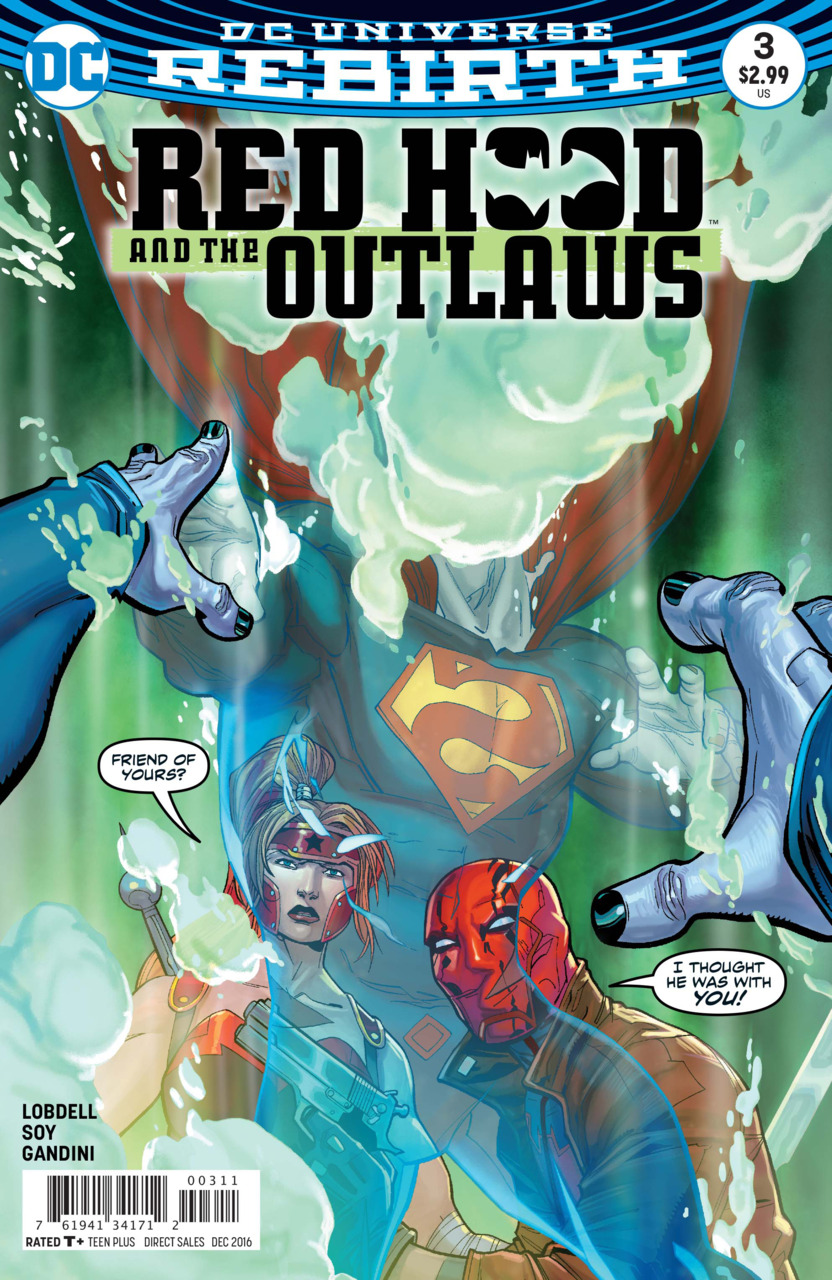 Synopsis: Opening with a flashback, the issue starts by showing Jason coming back to the cave after his first unofficial night as Robin. Bloodied and torn uniform, its clear it did not go well. Jason stares defiantly at the case holding Grayson’s old Robin outfit and asks it what it’s looking at. Shaken from this flashback, Red Hood is reminded by Artemis that they are still standing in front of a Superman clone and need to figure out what to do. Black Mask interrupts them and proceeds to hit them with knockout gas.

Jason wakes up the next morning and, apparently, Black Mask still does not suspect his ulterior motives. After greeting him in another room of his penthouse, Black Mask takes Red Hood to a secure floor to show him the captured Superman clone. Black Mask explains that he stole it from LexCorp after it was ordered to be destroyed by Lex Luthor now that he is going legitimate as a new, self-proclaimed Superman himself. Red Hood begins to get flashbacks of his resurrection in the Lazarus Pit as he watches the clone begin to break free from his test tube. Once free of the tube, the clone begins to undergo a change in which his skin whitens and his body gets bigger. Red Hood points out that the clone appears frightened which disappoints Black Mask. Holding him in his arms, Jason tells the clone to trust him that everything will be okay.

As Black Mask begins to brainwash the clone, it is clear that things will not be okay for the clone. Forced to watch newsreels of Superman, the clone is being shown what he is capable of before being forced to work for Black Mask. Red Hood asks Black Mask if he could try something to help the clone see himself as Superman. Before leaving, he speaks to Artemis in a cell who makes it clear that she is only still there to observe both the clone and Black Mask. Jason then spends a few hours researching the previous clone created by Luthor and then buys a Superman doll for this new “Bizarro”.

At the dinner table that evening, Black Mask questions Jason about how he can not find any information on his alter ego outside of Red Hood and why he wears a bat emblem. Jason shrugs it off with a joke about annoying Batman which pleases Black Mask.

Thoughts: Another solid issue with this series. As much as this book will become a team up book with this new “Dark Trinity”, it is nice how they include flashbacks of Red Hood and connect that to the current events. It was also great to see him relate to Bizarro and care for him in a certain way which will hopefully set up for a great relationship in future issues and arcs. Jumping off from the solid overall story, the actual dialogue and writing is fun and Lobdell even splices in sentimental moments like Jason holding Bizarro and getting him a Superman doll.

There are some problems with the story that annoy me a little. The fact that Black Mask still seemingly trusts Red Hood is a little ridiculous at this point. He shot at this own men along with being found with Artemis and not fighting her in front of Bizarro. He could be just leading Jason on which would be the only way I can see Lobdell “fixing” this issue that I have with story. Another slight problem I have is Jason saying that he can’t just rescue Bizarro because he needs the evidence of Black Mask’s manipulation of the mayor to put him in jail. I’m no lawyer, but I have a feeling that the evidence of Black Mask stealing a clone of Superman and property of LexCorp would be enough to put him away for at least a little while.

Back to positives, the artwork here by Soy and Gandini nails again this issue. The gray toned color palette used for flashbacks is a great way to separate from the rest of the other panels. One panel that sticks out for me especially was the shot of Red Hood holding Bizarro following his breakout from the test tube. I just loved how the light fell on top of them and set up this beautiful scene of normal person coming to aid for this “superman”. Also in that panel, the depiction of Jason’s’ rebirth in the water’s reflection helps to show these two characters’ inherent connection now with being “forced” to be born again and only helps to illustrate their future bond.

Overall, this series is still going strong and I can’t wait for the next issue. The truly great thing right now going forward is that we’re definitely going to get some great action, but Lobdell is delivering on the writing and character developments so we will actually care about what happens to them.