Review: Red Hood and the Outlaws #5 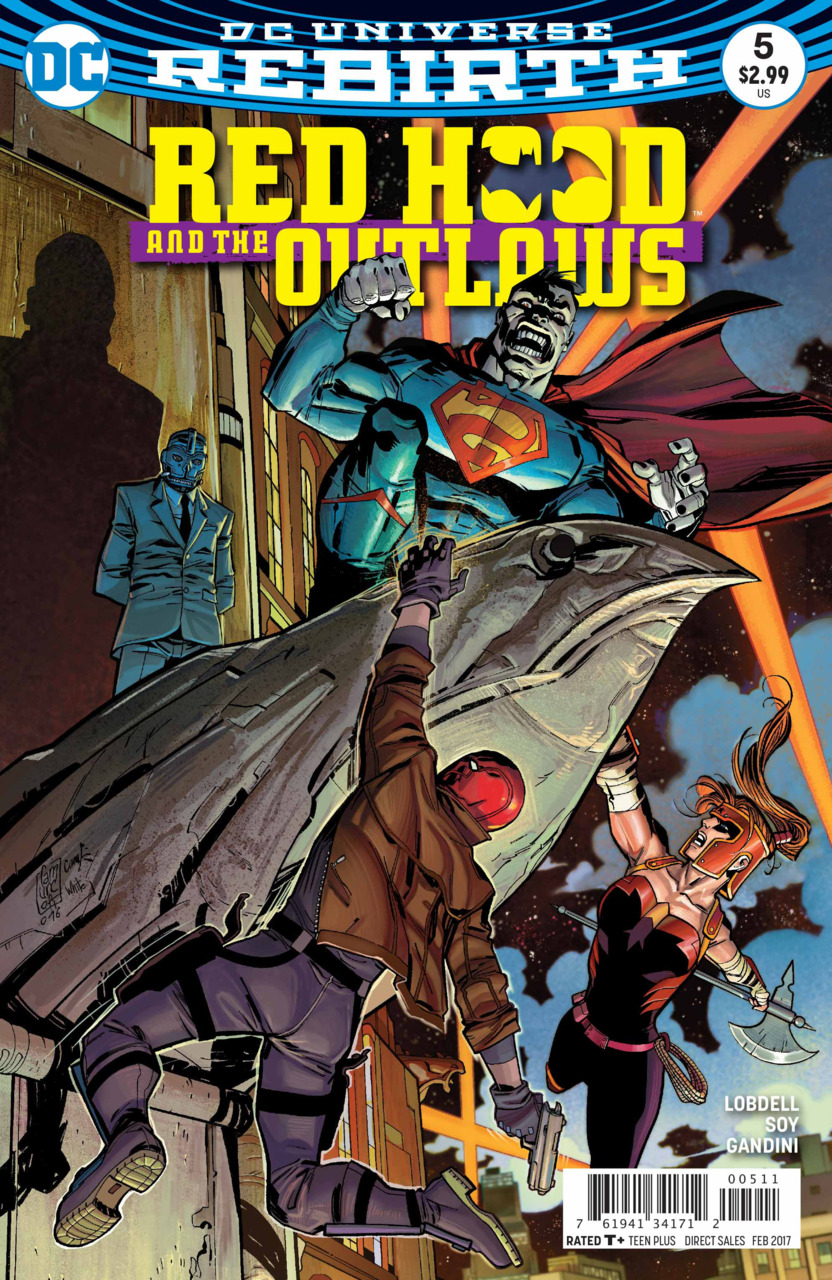 Synopsis: The issue picks up right where the previous month’s ended with Bizarro now under the control of Black Mask via the Techno-Organic Virus. Red Hood is attempting to stop him with armor piercing rounds but Bizarro barrels through the building and tries to fly away. To Red Hood’s surprise and relief, it appears that Bizarro is unable to fly right now which will make stopping him slightly easier. Black Mask appears and proceeds to gloat about having control over Bizarro and his plan to rid Gotham of the criminal element (which Jason reminds him that he is actually a part of…). Despite having a clear shot to take out Black Mask, Red Hood remembers Batman’s rules regarding killing and holds back.

Bizarro/Black Mask take advantage of Red Hood’s hesitation and strike. Slamming into a nearby tree, Jason realizes that the tree had been frozen by Bizarro to lessen the impact and that Bizarro must be actively fighting the Techno Organic Virus. As Red Hood tries to break through the mind control, Artemis arrives and holds Bizarro in place with her battle axe. It does not hold him long as he breaks off the tip of the axe that was stuck in him. Artemis feels the pain of the axe but tells Red Hood that she will be fine. Red Hood thinks he has a plan and has Artemis hold off Bizarro while he goes after Black Mask.

Leading Black Mask away, Jason hopes that the distance will weaken Black Mask’s hold on Bizarro while also getting Jason closer to the actual serum to counteract the Techno Organic Virus made by Dr. Simon Amal, AKA Crux. Red Hood slips into his hideout next to police headquarters to retrieve the serum when Black Mask also arrives. After gaining the upper hand in the fight, Red Hood states that he still will not kill Black Mask which prompts Roman to call him a coward and an idiot as he fires on Jason.

Meanwhile, Bizarro is breaking through the mind control and begins to push Artemis towards the hideout of Red Hood to confront Black Mask. The ends with Black Mask standing over Jason with a gun to his head telling him to stare death in the face and removing his mask. Jason jokes that he’s done that before.

Thoughts: Although this issue did not really try to develop any of the characters, it was still a fun issue. This arc feels like it’s coming to an end so I’m sure we will get more development moving forward but, for now, its seems that the action is reaching its climax. Lobdell seems to continue surprising us with solid issues month to month with this series. The brief quips from Jason really add levity to the situation which this series definitely needs despite some good, serious character moments. I’ve always been a Red Hood fan so to see his action and humor played out well and dealing with his frustration to now kill all add up to really fun moments with the character.

This issue was very action heavy, but that was nice to see how all three “heroes” stack up to one another. The Bizarro and Artemis fight was bombastic and great to see from panel to panel. Lobdell even worked in humor for these two characters which I figured would be harder than with Red Hood. The panel of Artemis just trying to push Bizarro and him lazily lumbering forward really was some funny imagery and entertaining.

Overall, between the comedic and solid writing from Lobdell and the consistently great art from Dexter Soy, I am again eagerly waiting for next month’s issue.